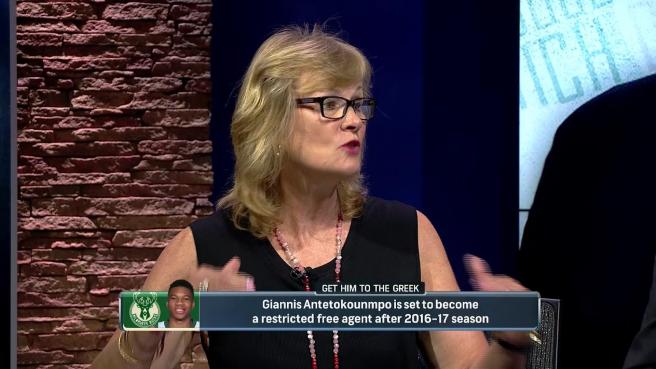 CSNNE writer and prominent sport writer Jackie MacMullan stirred up the LaMarcus Aldridge trade rumor on Tuesday stated he would not make the season with the Spurs and could be traded. Well Jackie MacMullan now seems to be re-canting her story and has even called the Spurs organization to apologize for making up this fabricated rumor.

The Rumor That Started It All.

Kens-5 sportscaster Joe Reinagel was a guest on Scott Ferrall’s podcast called Ferrall On The Bench and had this to say about the Jackie MacMullan Aldridge trade rumor.

“It’s absolutely not true,” San Antonio KENS sportscaster Joe Reinagel said on CBS Sports Radio’s Ferrall on the Bench. “I think this whole thing was started by Jackie MacMullan this morning, and I think she just woke up and said, ‘I need to cause a few problems. I’m going to make up a story.’ Because that’s basically what it is. The Spurs tell me there’s absolutely no truth to this at all, nor has there ever been a though of it, especially this time of year. It makes no sense at all.”

Joe Reinagel went on to say that with the Spurs off season acquisitions of both Pau Gasol and Dewayne Dedmon that Aldridge will not even be called upon to play center this season a position he has stated in the past he was not found of playing.

“They got Pau Gasol and Dewayne Dedmon, so LA will probably never play center this year unless it’s a mistake or something,” Reinagel said. “It’s just absolutely ludicrous. And I’m told – I just found this out a few minutes ago – that Jackie MacMullan has called the Spurs and  apologized for starting this whole rumor (Tuesday). So yeah, it just came out of left field, and I’m not sure what the heck is going on, but it’s absolutely not true.”

Joe Reinagel went on to say the Spurs could possibly look to trade Aldridge but not until the NBA All-Star Break or after the end of  the 2016-17 season.

“Once the season’s over, I wouldn’t be surprised if the Spurs shopped this guy around,” Reinagel said. “He’s going to make $22 million in the final year of his contract. Then it makes a little more sense. But right now, it’s just an absolute falsehood. I don’t know what to say. When I saw this today, (I thought), ‘You got to be kidding me.’ It’s unreal.”

Listen to the entire “Ferrall On The Bench” podcast and hear Joe Reinagel of Kens-5 dismiss the Jackie MacMullan, Aldridge trade rumor as a hoax.