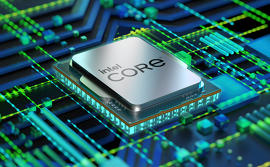 Intel unveiled its 12th-gen processors today, shedding light on what promises to be the company’s biggest step forward in on the desktop for years. These are finally 10nm parts – after seven brutal years and multiple 14nm iterations – and they also adopt a radically different hybrid design, with a combination of low-power ‘Efficient’ cores and high-power multi-threaded ‘Performance’ cores.

The top chip, the Core i9 12900K, includes eight of each type, for 16 cores and 24 threads in total, and promises to offer boosts of up to 30 percent depending on workload. For gaming, Intel is projecting gains of up to 20 percent, again depending on the game – and with the potential for more to come as games are optimised for the unique arrangement. These chips should also multi-task better, with the more efficient E cores taking on background tasks like streaming or virus scans while the P cores handle gaming or content creation. The new CPUs will arrive on November 4th, so we don’t have long to wait!

As well as the new CPUs, with that new process and new big/little design, there’s also a new larger socket, LGA1700, which is found on a new 600-series of motherboards, beginning with the high-end Z690. Some of these boards support a new RAM standard, DDR5, and a new PCIe standard, 5.0 that doubles available bandwidth per lane. To complicate matters further, Windows 11 is recommended to get the most out of the new Intel architecture. That leaves a lot of variables for testing, which we’ll get into down the road – but for now, let’s look at each of the new CPUs, detail Intel’s performance claims and discuss exactly how they’re able to extract more grunt from the new designs.

Intel unveiled six Alder Lake models today, which we’ve entabled below. The usual product families and suffixes apply here, so we have Core i5, i7 and i9, with ‘K’ for unlocked (overclockable) products and ‘KF’ for unlocked products without integrated graphics. (Locked and Core i3 models are likely to come down the road but haven’t been announced today.) The 12900K flagship is $50 more expensive than its predecessor, the 11900K, although this is a price per 1000 units and retail prices may be higher anyway due to the ongoing chip shortage.

All of the chips have a base power spec of 125W, with a maximum turbo power of 241W for Core i9, 190W for Core i7 and 150W for Core i5. Interestingly, Intel told us that these unlocked chips will turbo indefinitely now, in line with how most motherboard manufacturers were implementing turbo limits anyway – something that should hopefully level the playing field between boards with conservative and aggressive power strategies.

A good chunk of the extra performance comes from a much larger L3 cache than we saw in 11th-gen, a move that mirrors what AMD has done with its recent Ryzen processors. This should help to mitigate the higher latencies we’re seeing from DDR5 RAM, as the processor will have to fall back to RAM less frequently with a larger cache, and generally improve performance by a reasonable amount. Intel also spoke highly of its Thread Director microcontroller, which monitors instructions and CPU conditions like thermals and frequency and relays suggestions to the OS scheduler about which workloads should be prioritised. The scheduler is the one that ultimately makes the decision on which workloads run on which threads, allowing for user input as well. The Windows 11 scheduler is more advanced than its Windows 10 predecessor, having an awareness of each core’s performance at a given frequency, which is where Windows 11 performance gains (and consistency improvements) should come from. Anandtech’s 12th-gen analysis goes into more detail about how this all works, and is well worth a read.

For gaming, Intel showed sizeable gains from the Ryzen 5950X to the 12900K in the likes of GRID 2019 (+20 percent), Troy: A Total War Saga (+30 percent), Hitman 3 (+15 percent), Mount and Blade 2: Bannerlord (+14 percent), Far Cry 6 (+16 percent) and Age of Empires 4 (+11 percent); all of these were at 1080p max settings. Other games showed minimal advantage for the AMD processor – around three percent in Shadow of the Tomb Raider and a margin-of-error advantage in Crysis Remastered. However, these numbers were from a Windows 11 rig before AMD’s L3 cache issues were ironed out, so expect the margin to be tighter by the time these CPUs hit store shelves.

As well as potentially strong gaming performance, Intel touted a 32 percent speed boost in a Premiere Pro workload, a 36 percent boost in a Lightroom workload, so 12th-gen has some potential for content creators too. (We’re planning a workstation build around 12th-gen, so stay tuned to see how that shakes out.) All of these gains sound reasonable, but as always Intel is of course motivated to find the best examples it can – so wait for reviews, presumably around that November 4th release date, for more information about real-world performance.

What about that new DDR5 RAM? It’s worth going over the essentials from today’s announcements. The big thing here is that the modules should operate at higher frequencies and higher latencies, so high-spec DDR4 may be more performant than the fastest DDR5 kits in some tasks – for now. As with DDR4, latencies should come down and frequencies should go up as the technology matures, so there’s a decision to be made between a board with better value right now and one that will potentially scale better in the future. DDR5 supports a new XMP standard, XMP 3.0, which allows for five profiles (frequency, timing and voltage settings, essentially) over the two in DDR4. Interestingly, while three of these are set by the RAM manufacturer, two can be set by the user, complete with descriptive names (e.g. you might create profiles suited for different tasks, like gaming and content creation, and be able to switch between them rapidly). Power management has also migrated from the motherboard to the RAM itself, which could allow for more tweaking and overclocking opportunities in the future, and allows RAM settings to be altered in software – ie from Windows rather than from the BIOS. Finally, memory can now ‘turbo’ – it can run at its advertised XMP or manually overclocked frequency under load, but can can dial back its speed and voltage to more conservative JEDEC profiles as standard. Neat!

We should also mention overclocking. Intel seemed to suggest that there would be significant headroom for CPU overclocking available, as well as plenty of new knobs to play with. (“We’ve got you covered in knobs” was one memorable quote from the press event we attended – “beef 30 percent faster than the competition” was another, but we shan’t share the context of that one just yet.) Both the E and P cores can be overclocked, as can the ring or cache frequency, graphics frequency, memory frequency (as discussed) and base clock (BCLK) frequency, the latter of which we haven’t seen for years. There’s also a new one click OC function in Intel’s Xtreme Tuning Utility 7.5, which bumps up P cores by 100MHz and E cores by 300MHz. Finally, the 12th-gen uses a 25 percent thinner die (as did 11th-gen) and a 15 percent thinner soldered thermal interface material or STIM (this is new), which should make cooling the new chips a little easier.

As well as Intel’s 12th-gen festivities, its many partners have also made conjoined announcements. Specifically, Asus would like you to know that they are making a proper whack-ton of motherboards, with both DDR4 and DDR5 options available, as well as CPU coolers that fit the new LGA1700 socket. MSI, for its part, has also announced a full range of gaming and creator-focused motherboard options, again with both RAM options. Finally, Corsair has also released a bevy of new CPU coolers for the new format, including some rather good-looking ones that include incredibly high-res screens on so you can see your temperatures in stunning HD – or your favourite GIFs, whatever floats your boat. They’re also cranking out DDR5 memory kits, complete with glorious RGB, as are other memory brands like Crucial, G.Skill and XPG. We’ve received items from these vendors, so we’ll be able to tell you more about them around the time that everything launches around November 4th.

We’re looking forward to testing these new CPUs and their associated kit out ourselves and letting you know exactly how well Intel’s performance claims are borne out in the real world. Until then, why not let us know what you think of the announcement in the comments below?