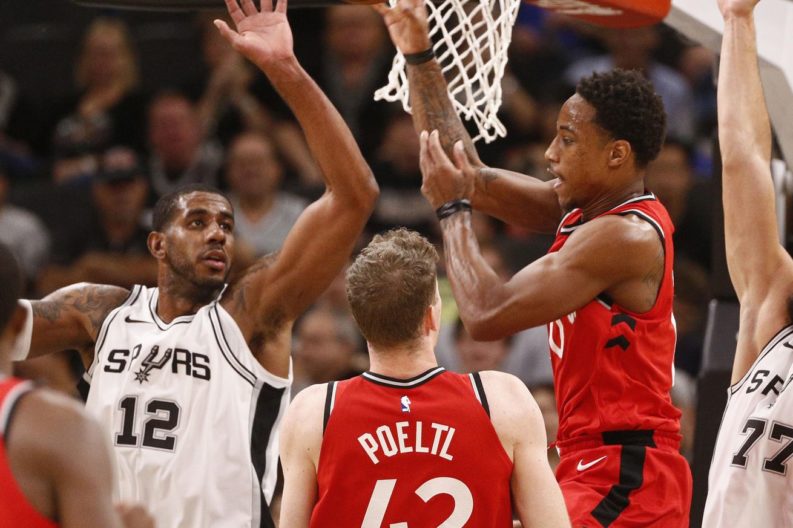 The Spurs have a had a busy offseason indeed. Trades, anticipated draft picks, retirements, and now the yearly Sports Illustrated rankings have the Good Guys pegged 9th in the Western Conference.

This week PtR contributors Bruno Passos, Jesus Gomez, Marilyn Dubinski, Mark Barrington, and editor-in-chief decipher the Top 100, the estimation that the Spurs will not make the playoffs for the first time in two decades, and send Bobo off into his post-basketball career.

Questions to the panel were posed last Sunday, so conversations Drew Eubanks, Brent Barry, and anything else that may have evolved will be in next week’s edition.

Pau Gasol and Dejounte Murray made the second half of Sports Illustrated’s Top 100 NBA players, landing at 98th and 89th, respectively. Who is more likely to outperform their ranking: the 17-year veteran or the 21-year-old guard?

Bruno Passos: The Spurs are counting on the answer here being Murray, so I’ll go with him. At 38, Gasol’s probably not due for any sort of significant resurgence, but his path to outplaying his rank may be easier than Murray’s, who needs to make a fundamental stride in his offense. That could be with his jumper, or it could be as a passer who can do some next-level creating for those around him.

Jesus Gomez: Weirdly, I think it might be Pau. All he’d have to do to make it happen would be to keep his production at the level it has the past two years while his three-point shot percentage gets closer to 40 percent. It’s a little harder for me to figure out what Dejounte can do to be more valuable than he was last year. I doubt his shot will be fixed in just one summer and with DeRozan around, his role on the ball won’t increase much. He’d have to make a leap into truly elite perimeter defender to outperform his ranking, which is possible, but unlikely.

Marilyn Dubinski: Although I can see Gasol being marginally better than he was last year (particularly the second half of the season when he was playing with a bum shoulder), it’s nearly impossible to imagine him being any higher as a top-100 player. (It was actually kind of surprising he made it at all). Although the Spurs have seen players stay the same or even improve at his age, there are just too many promising, young players coming for his spot (including on his own team in Jakob Poeltl). As for Murray, all he has to do to outperform his rank is slightly improve his offense game while keeping up his All-NBA defense, so my bet is with him.

Mark Barrington: Gasol will be better than last year, but Dejounte will have a breakout season and be a borderline All-Star.

J. R. Wilco: If Gasol ignores his wide-open three pointers like he did last season, it’s DJ going away. If Pau stretches the floor like he’s shown he can, then it could be close. But my gut says it’ll be Murray outperforming SI’s rating

Two other Spurs were featured on the list, DeMar DeRozan at 30 and LaMarcus Aldridge at 21. Do you agree with those rankings?

Passos: They’re both ranked on the lower end of what’s acceptable probably. I can certainly see at least one being inside the top 20, as they were both All-NBA Second Team last season, but I also understand that they’re not the easiest stars to plug and play in a system, with one being a limited shooter on the wing and the other a big who thrives off a high volume of touches at the post and elbow.

Gomez: I think the rankings are about right. Aldridge at 21 would have seemed high last offseason, but he had a fantastic year. Hopefully he’ll remain among the 20-30 best players next season, too. DeRozan’s placing in these rankings is typically a little controversial, since he’s a perennial All-Star whose made All-NBA teams and lands higher than players with none of those accolades. As long as he’s in that 20-30 range, however, I think he’s valued properly. He’s not a superstar but he’s not a completely unremarkable, either.

Dubinski: Aldridge seems about right, but I’m not sure what to think about DeRozan since I haven’t seen him much in action. I do know he probably thinks he’s better than that, and it will be just another chip on his shoulder that he will look to use as motivation this season.

Barrington: LaMarcus is a workhorse who carried the team last year, so that’s probably a good rating for him. He might slip a little next year since he won’t have to do as much with more help on offense. DeMar is an elite scorer, but he wasn’t that great of a defender last year in Toronto, so he might actually have been ranked a little high at 30. He’s going to be better this year on both ends of the court, so expect both Aldridge and him to be in the 20s in 2018-2019.

Wilco: I’ve probably admitted this before, but in case I haven’t — rankings (and top XX players lists) are fun as an exercise in seeing what different analysts/commenters/talking heads think about the relative value different players, but they’re completely arbitrary because so much is dependent on what system they’re playing in, and what’s asked of them. That said, both numbers seem a bit low to me. But what do I know? I’m a Spurs fan.

Speaking of rankings, ESPN released its future power rankings, which aim to predict a franchise’s success over the next three seasons. The Spurs ranked ninth, dropping two spots from last offseason. Is that too optimistic, too pessimistic or just right?

Passos: That’s fine. They have good but not elite top-level talent, and a handful of young players who can still prove themselves. This rank was almost certainly going to drop with the exit of a top-five player in his prime in Kawhi Leonard.

Gomez: I think it’s about right. Unless something goes wrong, they should be a playoff team the next two years with their core of Aldridge and DeRozan. They have a few young players who might emerge and their draft picks, plus one from Toronto. Now that Kawhi is gone they won’t likely be a contender, but they should remain a good team that gets a little better each of the next two summers, even if the front office can’t swing a trade that provides a huge talent upgrade.

Dubinski: It seems about right. They naturally are not better off than they would have been had Leonard stayed, been healthy, and signed an extension, but they also have their own sneakily bright future that many don’t know about thanks to some promising young pieces. I see why they dropped a bit this season, but I can also see them rising in the next couple of years as the young guns mature and grow.

Barrington: I don’t have any problem with that ranking. They are going to be a mid-level playoff team that has a chance to shake things up if they get insanely hot or other contenders run into problems.

Wilco: I’m surprised they didn’t drop further than 9th in ESPN’s eyes. Seems fine to me too.

Our beloved Boris Diaw retired while picking up a humanitarian award from the Naismith Basketball Hall of Fame. What’s your favorite Bobo-related moment or story?

Passos: Manu Ginobili once said of him, “If you see me or Tim [Duncan] having a bad day, basically we do not speak to anybody (or) we say bad words — it’s visible… But, again, [Boris’] worst day is many times better than most of our best days.” That’s a pretty incredible way of summing someone up, and it speaks to the levity and joy that Diaw brought to basketball and to all his extracurricular endeavors.

Gomez: I love that Bobo would only play well when it was in his terms. After his sophomore year in Atlanta, he told ISO superfan Mike Woodson that he simply couldn’t play for him. In Charlotte, he almost drove Paul Silas to insanity by always passing and never shooting. In Phoenix, Terry Porter called him out for passing up an open shot and the next game he drove to the bucket all game only to pass the ball back outside. The dude wanted to play unselfish, team-oriented basketball and was willing to harm his career to get out of situations in which that wasn’t possible. I always admired his integrity in that regard.

Dubinski: It’s impossible not to love everything he did for the Spurs on the court, but I will always love Bobo’s meme-worthy response to Pop when he trolled him over his weight in 2014:

No worries pop only one glass of wine and daily workouts!

Barrington: “That was not difficult.”

The Spurs are starting to fill this year’s training camp roster. Is there any veteran that you think they should consider inviting?

Passos: You can never go wrong with having another steady hand on the point guard depth chart, but I’m not sure what reliable veterans are left at this point. Jarrett Jack would’ve been nice?

Gomez: I’d bring in Derrick Williams, just to see if he’s worked on his outside shot. I doubt he could make the team even if he has, but his athleticism could give him a small edge over Quincy Pondexter and Josh Huestis in the battle for the 15th spot. I’d kick the tires on Joakim Noah as well, if he gets waived.

Dubinski: I’d be lying if I said I’d given it much thought since the regular season roster is all but set. The Spurs already have a nice balance between veteran leaders and youth at each position, so I can’t think of any position that needs filling in that sense.

Barrington: I can’t think of anyone who’s available that could really improve the team. Maybe bringing in Jamal Crawford to mentor Dejounte would be cool, but honestly, he’s already doing that without the Spurs having to pay him a salary.

Wilco: There’s a veteran Virgin Islander I wouldn’t mind them bringing in…

Do you have a question for the round table? Be sure to post in the comments.