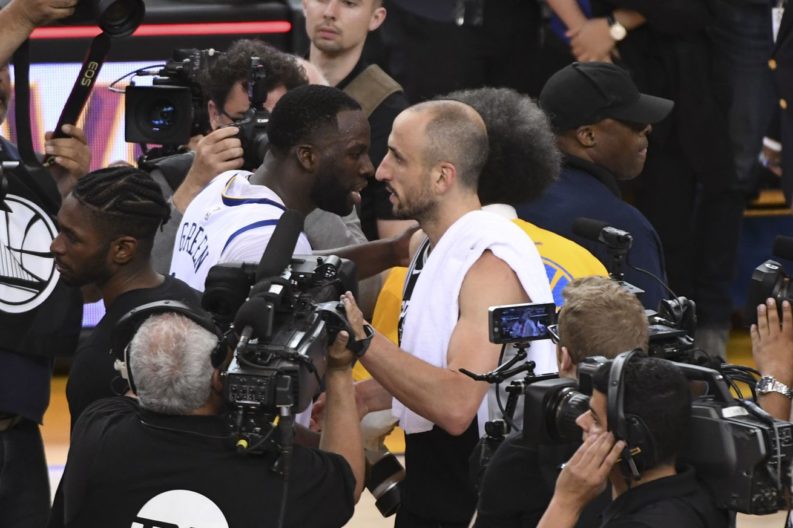 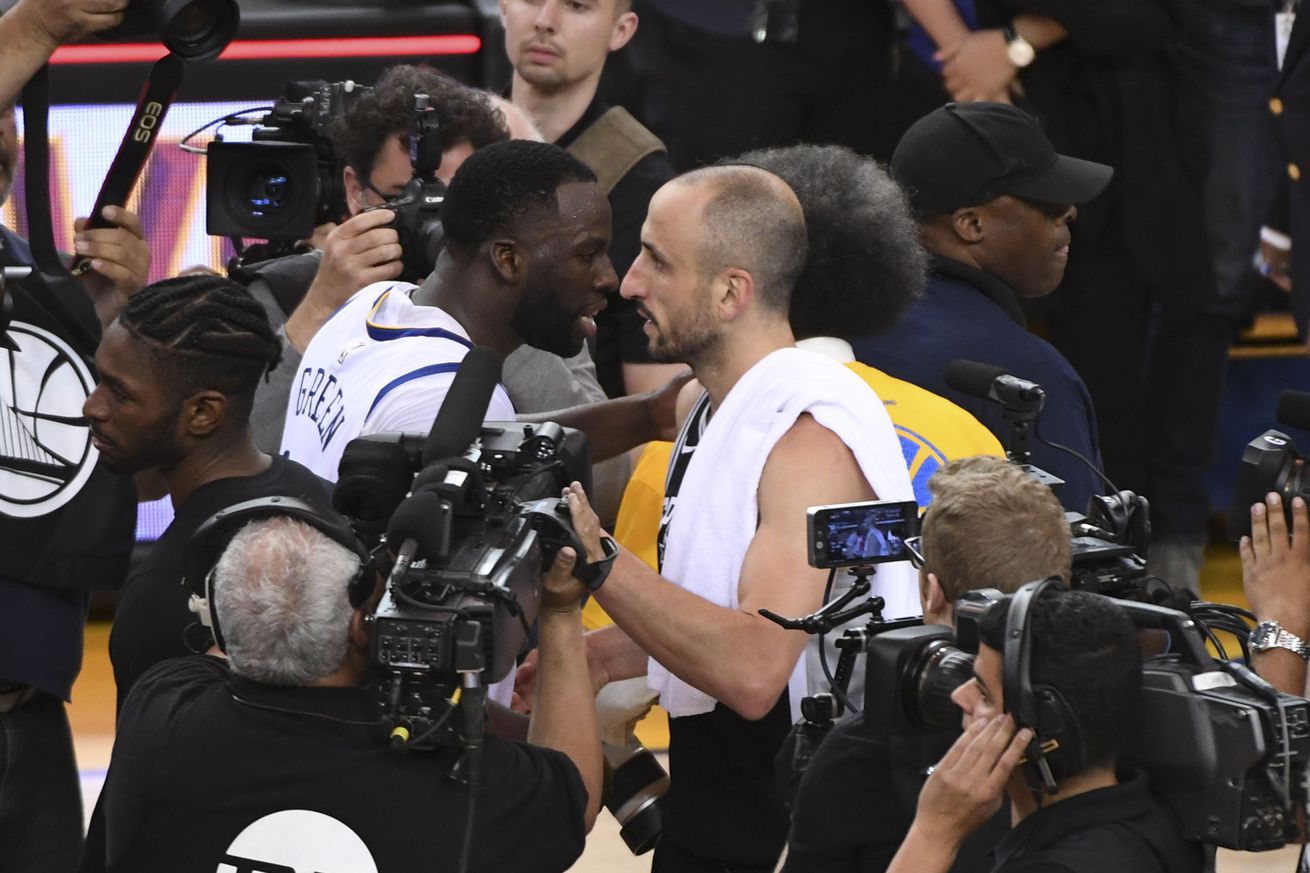 If you thought trading away an MVP candidiate was going to be the biggest Spurs news of the summer . . .

It’s truly the end of an era as Manu Ginobili rides off into the sunset. And just like any Western, we’re a little sad at his departure, though we knew the inevitability all along. For us, legends never die. And in that vein, Manu Ginobili will reign supreme in his post playing career as he has in Silver & Black.

But make no bones about it, there will be a loss at the guard position. A generational talent such as Ginobili are not shoes easily filled.

The end of the era, Manu retired. What will the Spurs miss the most about Ginobili in the months to come?

Marilyn Dubinski: His leadership and ability to come through in the clutch, and that’s just for starters. Manu was the heart and soul of the team for many years, but last season showed how truly important he was. Honestly, I’m not even sure they make the playoffs without some of his amazing performances.

Bruno Passos: His dependability. Even at 41 he’d still have been a stabilizing presence with the ball in his hands, not to mention a guy who not only knew exactly when and where to rotate on both ends of the floor, but who could keep all the new guys in check.

Mark Barrington: The creativity. The genuineness. The warmth. The willingness to take chances and even fail sometimes. The lack of pretense. How much he gives to the fans of himself. There will never be another like him.

Jesus Gomez: His ability to make plays. There have been few players in league history with Manu’s ability to change the momentum of the game by doing something unexpected. Even at age 40 he found ways to energize his team by risking his body and drawing a charge or blocking a shot out of nowhere. The Spurs will miss that.

J. R. Wilco: Certainly they’ll miss all of the things mentioned above, but to me what they’re miss most is, for lack of a better term, his Manu-ness — his ability to a) know just when a particular play was needed, and b) get that exact kind of play. I’ve never seen anyone else do that so frequently that it seemed like something he could produce at will, and since no one else could do it, then to me it’s the least-replaceable part of his game.

Does the delay of Ginobili’s retirement announcement say something about the state of the Spurs?

Dubinski: At first, I felt that the longer he took to decide, the more likely he was to return, but after reading his article today and how he explained he needed to spend some time on the court (after his extensive vacation) to truly see how his body felt, I understand the delayed decision. He also said he knew coming into last season that it was going to be his last, barring a miracle with his body, so while I do believe his body played more of a role in his retirement than the state of the Spurs. If all was right in the world, Kawhi Leonard was returning, and Manu felt they had a chance to win a championship next season, I could have seen him fighting through the pain for one more go.

Passos: The decision seemed to be far more about the wear on his body and the desire to spend more time with his family than anything else, but it’s still a shame his last season had to be mired in the Kawhi madness.

Barrington: No. Manu has earned the right to time the announcement however he wanted to, and the team waited until he was ready to let the world know.

Gomez: It’s possible. I certainly believe that what happened last year with Leonard probably wore on Manu, which might have contributed to his extended vacation. Pop has been enjoying his duties as Team USA coach, which is awesome, but that involved leaving San Antonio. It appears that there was less of an urgency to figure out whether Manu was returning or not, which is not shocking. The team is clearly in transition.

Wilco: Until I read his goodbye letter, I was all over the map about why it was taking so long. But from Manu’s account, he was giving himself every opportunity to recapture the desire he needed to come back. In that case, I’m thankful that he didn’t come out immediately after the season ended. It gave us that much more time to think of him as being a part of the team.

As sad as it may be to see Manu go, someone is going to benefit from his exit in terms of playing time and experience. Which player(s) could see his role increase the most with Manu gone?

Dubinski: I believe Derrick White was going to get some minutes regardless of if Manu returned or not. That number may increase now that Manu is gone, but the biggest beneficiary might be Lonnie Walker IV. Pop has mentioned that he could get more playing time than most rookies have under his watch, and a big window has now opened for him to crack the second unit. Hopefully he takes advantage.

Passos: I think it has to be White. Many of the things that Manu takes with him — offensive versatility, secondary playmaking, shooting — are traits that the second-year guard can theoretically bring to the team. Add how he looked in his few chances last season, plus a super-promising Summer League performance, and things may be breaking just right for White to quickly carve out a meaningful role in the rotation.

Barrington: I’m excited about seeing Lonnie Walker IV, but I’m not sure he’s ready to do much yet, but he’ll be getting more time to play in San Antonio than he would with Manu here. I think his time starts next year, but maybe we will get some glimpses this season of his talent.

Gomez: I’m a Derrick White fan after how he performed in G-League play and Summer League. I think he can contribute. Just like Manu, he can play on and off the ball and should be a passable defender. As much as Lonnie Walker’s potential excites me, I’d love to see White get a shot at earning a permanent spot in the rotation.

Wilco: I’ll say White as well. He’s killed it in G-League and Summer League, which means he deserves a shot with the big team. It doesn’t assure his success; it just means he’s earned his shot.

Do you see Ginobili staying on with the Spurs in some capacity like Matt Bonner or Sean Elliott? Or will Manu take a page from Tim Duncan and disappear for a while?

Dubinski: Manu said he’ll be around to help and mentor, just like Tim, but if he does take on a more official role with the team it will probably be a year (or several) down the line. He’s ready to spend extensive time with his family, and any role that requires him to be with the team in the evening takes away from that.

Passos: His newfound freedom and curiosity for the world would make me think that any sort of formal role with the team won’t happen — at least not immediately. But he’s said he intends to hang around in some way, and it makes sense for a basketball lifer and a close member of the Spurs family to retain a connection while he figures out what he’ll do next. As we’ve had with Tim, I look forward to all the Manu sightings to come.

Barrington: Tim has been around the team, but only in an unofficial capacity. I expect the same from Manu. He will mentor players and help out, but I think his first priority will be with his family, which it should be.

Wilco: I’ll answer the question we’re all really wondering (or at least the one I’m thinking about): will he ever coach for the Spurs? My heart says he’d be one of the most amazing coach ever. My head says he has too many other interests to dedicate any more of his time to the day-in-day-out a team requires. But my gut is leaning toward him inventing his own sport and being its first commissioner.

Manu’s retirement officially brings the Big 3 to an end, but head coach Gregg Popovich remains. Will Ginobili’s decision to hang it up influence Pop to follow suit at the end of this season?

Dubinski: Pop has shown zero indications that he’s ready to retire and has switched from “I’m following Tim Duncan out the door” to wanting to leave on his own terms, which will likely be when he’s no longer enjoying his job. That doesn’t seem like anytime soon, so I’m sticking with 2021 at the earliest.

Passos: I wouldn’t think so. If anything, Pop has often seemed most invigorated and locked in when dealing with up and coming players and improvising with lineups. He’ll have plenty of that moving forward.

Barrington: Nope. You’re stuck with Pop at least through 2020. Which is fine with me.

Gomez: I doubt Pop leaves the Spurs before 2020. He’ll likely want to remain active until he coaches Team USA in the Olympics.

Wilco: No. Pop is thankfully here for the duration.

Please add you comments about the Spurs’ heart and soul below.