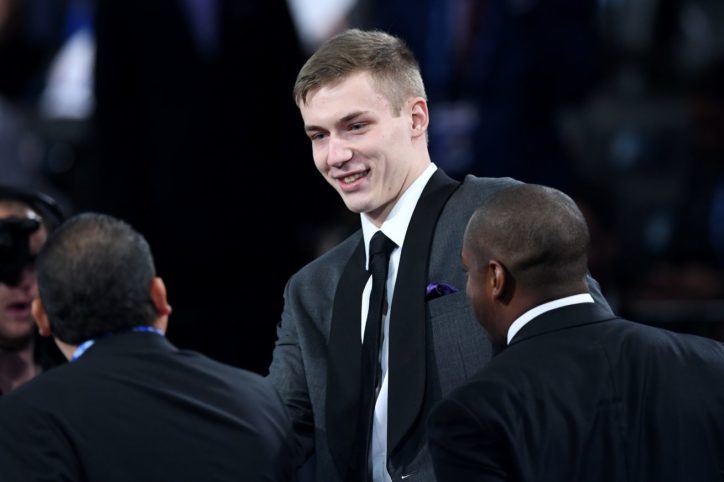 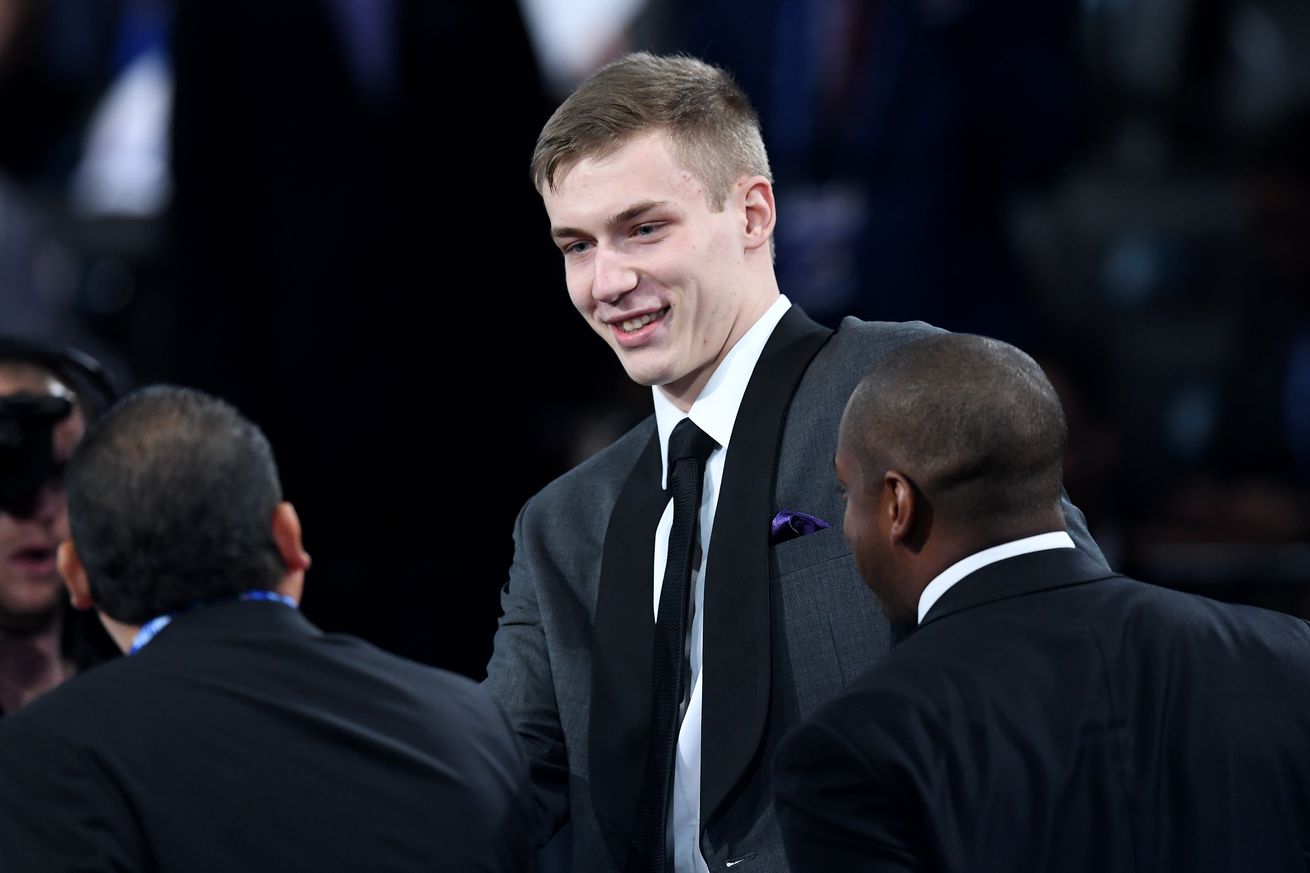 The Spurs stayed put at their respective slots on draft night, nabbing a pair of 19-year-olds who should fit well with their young core and whose potential should be maximized by their proven developmental system.

A draft that many anticipated to be hectic lived up to its billing on Thursday, as nine picks changed hands in the first round alone. Some teams reached, some openly looked to trade up or down, projected lottery picks slipped down the board, and it was all maybe a bit too much delirium for a Spurs fanbase that was bracing itself for a big splash at 19, or sooner.

The Spurs, true to form, took a more muted approach, neither swinging for one of the lottery talents who fell to them or getting in the mix for the many picks that were moved. In the end, they nabbed big man Luka Samanic with their own first-round pick, and then followed it up with Kentucky swingman Keldon Johnson at 29 — two 19-year-olds that fill long-term roster holes and add a bit more sheen to an already-promising future outlook. They closed things off by using the 49th pick on Quinndary Weatherspoon, a 6’4” guard from Mississippi State — which is more than I knew about Quinndary Weatherspoon going into the night.

“It never goes as planned,” joked Spurs GM R.C. Buford when asked if the night turned out just as he’d envisioned. While it could be a throwaway comment, rumors had surfaced that San Antonio may have been looking to trade up, and it’s possible that early surprises (such as Rui Hachimura’s selection at 9 by the Wizards) forced them down a different path.

“I’m really proud of the work our group did,” added Buford. “It’s an unbelievable group effort to get through the amount of players and proximity that they come from, the distances that they come from. To [our team and scouts around the world], this was a well-executed gameplan.”

The fit within the team’s blossoming young core makes sense. The Spurs have plenty of young guards, plus Jakob Poeltl at center, allowing the versatile Samanic and smooth-shooting Johnson to round things out nicely.

Samanic is the latest in a long list of overseas players to have their names called by the Spurs, and he’s someone they’ve had on their radar for some time. Buford himself was reportedly in Slovenia to watch Samanic’s Petrol Olimpija team play back in late April. That kind of intel may have helped make up for a workout in San Antonio in which the Croatian admittedly didn’t perform as well as he’d have liked.

“It was my first workout with an NBA team; it was difficult,” he said after being selected.

“The workouts are just a small part of the process, of the puzzle you’re trying to put together,” said Buford. “You can make mistakes by over-emphasizing, over-evaluating any one piece of the process. While he may not have felt he had a great workout, it was only one part of the overall process.”

The process — and the Spurs’ program in general — were as much a feature of Buford’s post-draft availability as the players selected, and he gravitated back to the developmental system the players would be entering, and their expressed enthusiasm to put in the work.

“[Luka] will make shots. He’ll need to improve that, but the work he’s prepared to do will be matched by Chip and his developmental team. Assuming he comes in the gym ready to work, I’ll bet on Chip and the work that they do.”

Was Samanic something of a reach at 19, a player they could’ve waited for at 29 or should’ve foregone for someone who’d slipped like Brandon Clarke or Nassir Little? Buford doesn’t think so.

“We felt like we were taking him in the appropriate spot. I don’t know if we worry about when we should we take someone. We felt like he was the best player on the board at the time and had been a target on our group . . . He’s a really skilled player at a position that now requires it in our league. He’s got to tighten up his game, he’s gotta be better physically, but from a skill and talent standpoint, we felt like we were getting somebody that’ll fit in with the development of a lot of our young guys.”

Another question surrounding the selection at 19 was whether the overseas prospect would stay in Europe for at least another year or if he was ready to come over in 2019. On a conference call with San Antonio media members, Samanic was quick to confirm he was headed to South Texas — and soon.

“Yes. Tomorrow.” (Buford later echoed the same expectation of Samanic being in the NBA next season.)

While Samanic may have gone a little earlier than expected, it was the opposite for Johnson, who most mock drafts had around the 20th pick. That may explain why the Spurs (and, presumably, other teams picking in the late 20s) weren’t even able to work the Kentucky player out — although Buford noted that they did explore other available backchannels to learn what they had to about the SEC Freshman of the Year.

“I think people expected him to go a lot higher in the draft. We had him as a top-rated player at his position.”

It’s become trite to talk about the Spurs and “market inefficiencies,” mostly because what those inefficiencies are changes over time. But Buford may have tipped his hand to one that influenced the Johnson selection, at least in terms of how they evaluated his potential:

“Sometimes, especially when they’re not the elite talent at Kentucky, you oftentimes get maybe lumped into a group of really good players and it may be difficult to separate yourself. The team had 3 guys drafted in the first round. That potential is there.”

Of course, being a Spur and spending most of your time in San Antonio aren’t always the same thing for rookies. Given Samanic and Johnson’s age and place on the depth chart, it’s fair to imagine many of their early reps will be for the G-League affiliate in Austin, while that would be a best-case scenario for Weatherspoon, likely on a 2-way contract.

“We don’t want to set any expectations. [Luka] is one of the youngest guys in the draft . . . We’re excited to just get them in the gym and see what we can do.”

The Spurs are a lesson in tempering early hype for the sake of the process — if the draft isn’t a reminder of that, then what happens next certainly should be. As with previous first-round picks, Samanic and Johnson may not get as many early NBA minutes as their peers, but whatever time they spend in the G-League should pay off in the long run.

“I’d say two things,” said Buford. “Austin provides us a great opportunity and our guys have taken great advantage of the work that is available to them. Starting years back, with the approach of our staff and the attention to the details that get carried from Austin to San Antonio, that allows the growth that you see. It puts Cory Joseph in a position to be successful, it puts Kyle Anderson, it puts Dejounte and Derrick in positions to step in. And I think it’s a tribute to Pop and our coaching staff that they trust that process and allow those guys those opportunities to be successful.”

That kind of measured talk feels a bit at odds with the dizzying hype that is the NBA’s four-hour-long draft show, an ode to wingspan, athleticism, and the trajectory-altering promise they carry for each team. Picks are immediately scrutinized and graded, and fans move on to free agency with a mind to see their rookies in summer league and then on the floor in October. The Spurs’ gamble is more of a slow play, and it’s one that’s proved fruitful so far.

“We’re excited to have Luka, Keldon and Quinndary in our program. It’s a long journey, but we’re ready to get started.”

In the 2019 draft, the Spurs bet on fit and themselves
Source: Pounding The Rock