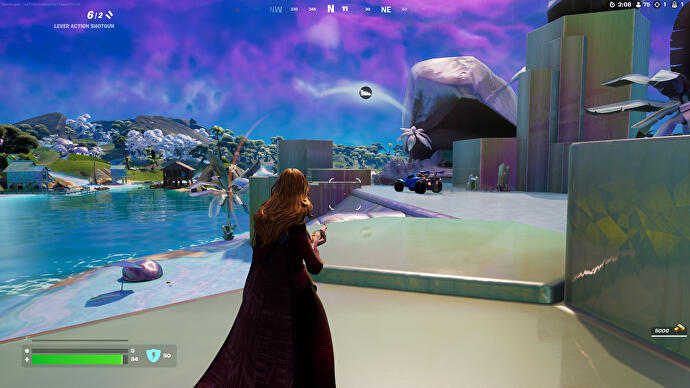 Hello! Today we’re taking a look at one of Fortnite’s greatest features – the option to visualise sound effects.

Chris: After a decade of mishearing people in the office, I’ve been wearing a hearing aid for most of the last year or so. It’s been absolutely incredible. I have mild hearing loss, mostly high frequency sounds, which is why I have had trouble with human speech – I can’t hear the consonants anymore. When I first put my hearing aid on at the hospital and then walked outside, I don’t think I’d ever heard so much birdsong in my life – all the birds in the world came back to me.

Anyway, one of the things I’d noticed slipping before I got my hearing aid was fast-paced games like Fortnite. It’s a game you play with your ears a lot of the time – I wasn’t hearing chests or the sounds of people healing or approaching – all sorts of things. My daughter introduced me to the Fortnite Sound Ring – the official term, I think, is the visual sound effects setting – and it’s been transformative. For someone with hearing issues like me it’s a game-changer, but I’ve been talking to a number of people who don’t have hearing issues and who also use it and also find it to be a brilliant thing – is that a fair way of putting it?

Tom: I always play Fortnite with the Sound Ring on now, and have told equally hearing friends I play with to turn it on for themselves as well. It’s a revelation. It feels a bit like a cheat to be using it, to be honest, which has left me a little uneasy writing about how clever it is. It’s not my discovery to talk about, and it was not specifically designed for people like me. But it has made my game experience so much better.

It’s made me appreciate Fortnite’s sound design more too, in a way. I’ve realised so much of what you read from Fortnite’s moment-to-moment gameplay you don’t actually read at all. The off-screen sound of a chest, the glider of an opponent swooping down. The footsteps nearby, the sound of your own weapon changing as it reaches the end of a clip. It’s not an exaggeration to say some of the noises the Sound Ring has visualised I did not even realise were audio cues I relied upon as a basic part of play.

Chris: Yes! I think this is a central thing about it – it’s a really fantastic piece of work. They’ve really put the effort into this accessibility tool. Just to quickly describe it, it’s a ring in the centre of the screen that highlights any sounds you hear. There’s an icon to say what the sound is, and then there are other things to show proximity and intensity. It’s a mark of how natural it all is that I’m actually at a loss to describe it – I use it rather than notice it.

I’m interested that you say you feel uneasy about writing about how clever it is. I think I understand that feeling. In the past I’ve felt uneasy writing about accessibility features that I don’t actually use, or that I felt obviously weren’t intended for me. But it’s also interesting that as someone who definitely needs the Fortnite Sound Ring, I’m actually delighted that all sorts of people are using it, and for all sorts of reasons. I imagine the people who made it are happy that so many people are getting use out of it?

Fortnite bid farewell to Chapter 2 and its second map in its Island-flipping The End event.

Tom: I’m so glad you’re highlighting it here because it is the kind of thing that deserves recognition and that ultimately I’d love to see in other games. (And I’d hope Epic wouldn’t mind seeing it crop up elsewhere too.) I think it’s a fantastic piece of accessibility design and a genuine aid for everyone. It helps me play better – prioritise what I’m going to do next based on something’s proximity, discover chests or other players I might not have had cues to. It makes me more alert to the game and its world feel more alive to see visual clues to things I might not have picked up myself. In an ideal world, I play Fortnite with the sound up very loud. But I do not live in an ideal world and have neighbours, and my TV is also in the same room as my washing machine. And if I play using headphones I miss audio cues in the real world, and there is (sadly) no Sound Ring for that!