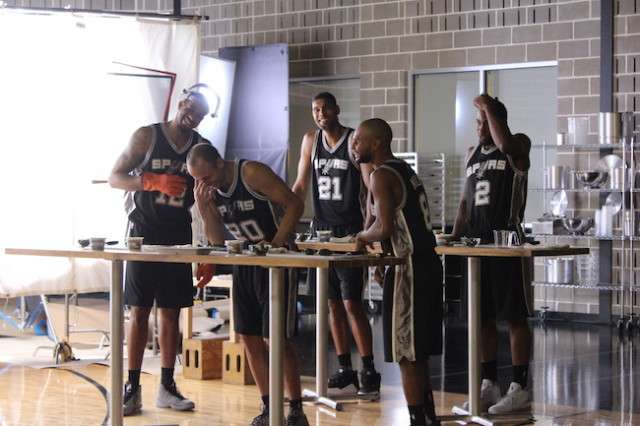 The San Antonio Spurs H-E-B commercials are incredibly popular, but what’s the process behind these spots and why are they so beloved by Spurs fans? Chris Smith knew they struck a chord when he began to see his creative team’s phrases and one-liners on fan-made signs at Spurs games. Suddenly, a vocabulary test word like indubitably was inextricably linked with Spurs fandom.“That was when we said, ‘Alright, we’ve really tapped into something here.’ And the pressure was on to keep it at that level,” Smith admitted over the phone. “So that’s been fun.” Smith, Brand Creative Group Head at the branding and advertising agency the Richards Group in Dallas, led the team in charge of writing scripts for the H-E-B commercials starring San Antonio Spurs stars like Tim Duncan, Manu Ginobili and Tony Parker. The long-running commercial spots, now in their 11th year with this season’s batch of six ads (five English language commercials and one in Spanish), have become an annual tradition for Spurs fans. Though it wasn’t until recently they became ingrained as a part of Spurs pop culture. “To be totally honest, our ads were not very good for the first five years of doing them,” said Cory Basso, the Group Vice President of Marketing and Advertising at H-E-B. “It’s taken a long time to get us here.”………Read More

Source: How the Spurs H-E-B commercials have become so popular