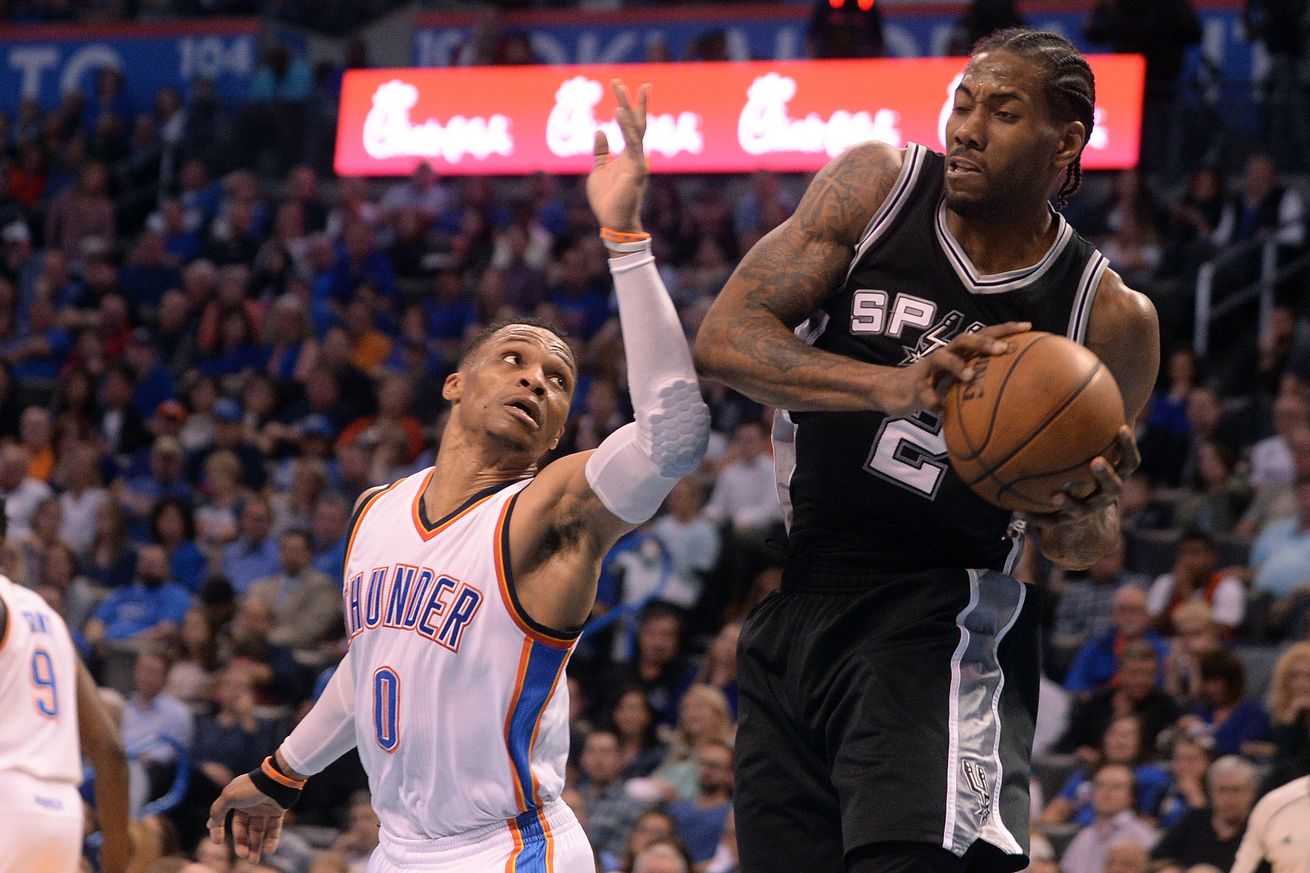 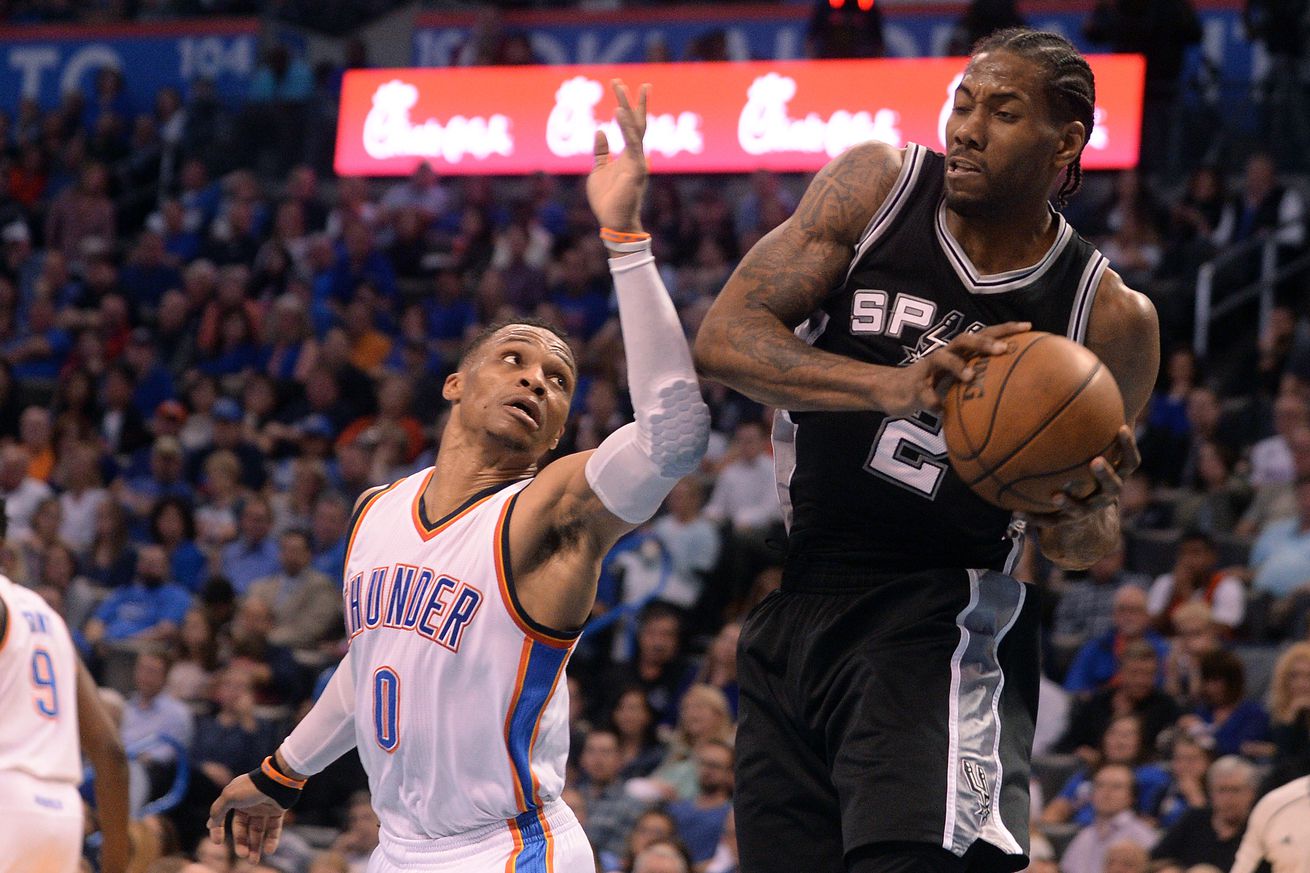 A play by play look at the Spurs 4th quarter comeback in OKC.

“It’s not how you start the game but how you finish that counts.” — Well, that proved to be correct in the 75th regular game of the season. It has been a season filled with highs and lows, but heading into the playoffs it is imperative that the Spurs enter with the right attitude. A rock-solid belief that they can respond to adversity. It is how the handle these responses that will get them over the hump. Friday night’s win over the Thunder was a step in the right direction.

The come back of this game began in the third quarter but this breakdown is about how they finished the game off. The fourth quarter started off with the Spurs down five.

#1 Lets begin as Patty Mills passes to David Lee who hands it back to Patty, who drives to the basket and finishes a little short but Lee tips it back in for two.

#2 Russell Westbrook drives to the basket but is rejected by LaMarcus Aldridge. The ball comes to Kawhi Leonard who tips it to Tony Parker. Tony brings the ball up and passes to a open Kawhi who takes the three. But the shot is a little off and David Lee gets the rebound and put back for two.

#3 Kawhi passes to LaMarcus who passes to Manu. Then Manu drives around the defender a makes a incredible off balance leaner for the basket.

#4 Here we catch up with Manu as he appears to be caught “in jail” but notices Patty going to the opposite corner. As he’s falling down, Manu makes a miracle cross court pass to Patty who buries the three.

#5 As LaMarcus passes to Manu, we watch as the play develops into a pop out by LaMarcus who knocks down the two.

#6 With the proper floor spacing from the Spurs, Patty drives the lane and dishes to Pau Gasol who passes to Manu who is well covered. So Manu passes back to Pau who takes and makes the wide open three. #HotPotato

#7 Here Kawhi comes around a Gasol screen with two defenders chasing him. Kawhi takes the shot but misses. LaMarcus fights for the rebound and is fouled in the process. LaMarcus would go on and make both free throws.

#8 This is the Superb Ball Movement play of the game — and it produced the go-ahead backet. Patty brings the ball up, Pau sets the screen and Patty goes left but notices traffic and throws it back to Pau. Manu comes over and takes the hand off from Pau. Manu draws the defenders and Pau rolls. LaMarcus heads for the basket giving Pau the option to pass which he does and LaMarcus slam dunks the ball putting the Spurs up one with twenty seconds left to play.

#9 This last play shows Westbrook bringing the ball up and deciding to attack the rim but LaMarcus blocks the shot. A scramble ensues and Kawhi ends up with the ball and takes it full court, absorbs the intentional foul and lays it in. He makes the free throw to put the game away.

After the game, Manu had this to say: ”We needed one like this. We didn’t play good for thirty minutes of the game but we bounced back, we played aggressive, we stayed together. In this league, you have to play forty eight minutes, because if not, things like this happen.” Lesson learned.