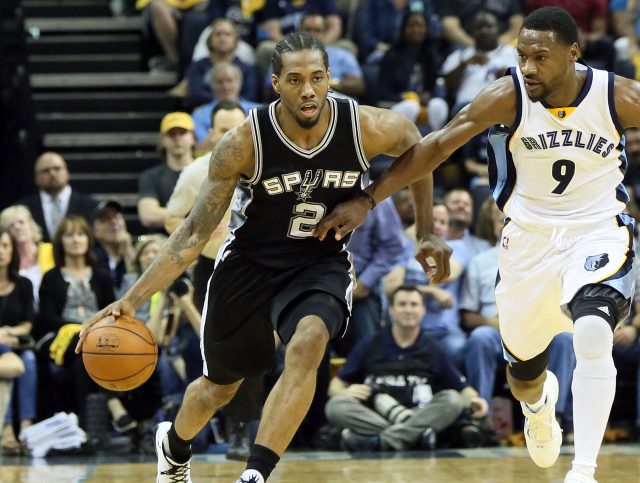 True to their word, the Memphis Grizzlies came armed to the hilt with whatever they could find in Game 3 of their first-round series against the San Antonio Spurs. Unfortunately, that wasn’t enough to change the outcome.

That’s because the Spurs employ Kawhi Leonard, a two-way terror the Grizzlies had no answer for. While blowouts in Games 1 and 2 allowed Spurs coach Gregg Popovich to rest his starters in the final frame, the Grizzlies’ feisty performance meant Leonard had to play nearly the entire fourth quarter.

It was there that he took over and crushed Memphis’ soul, putting the clamps on their wings (who combined to shoot 3-of-11 in the quarter), while pouring in 13 points at the other end to help the Spurs pull away for a 96-87 win and 3-0 series stranglehold.

“Kawhi Leonard’s got to be one of the top two, top three, players in the league at both ends,” Grizzlies power forward Zach Randolph said after the game. “That kid is the silent assassin.”

For the game, Leonard finished with 32 points, seven rebounds, two assists, four steals, and five blocks, all without committing a single turnover or personal foul…..Read More