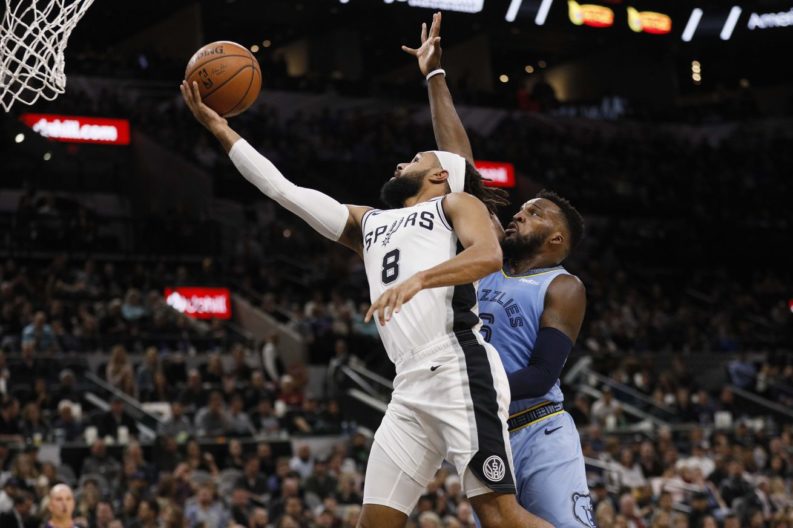 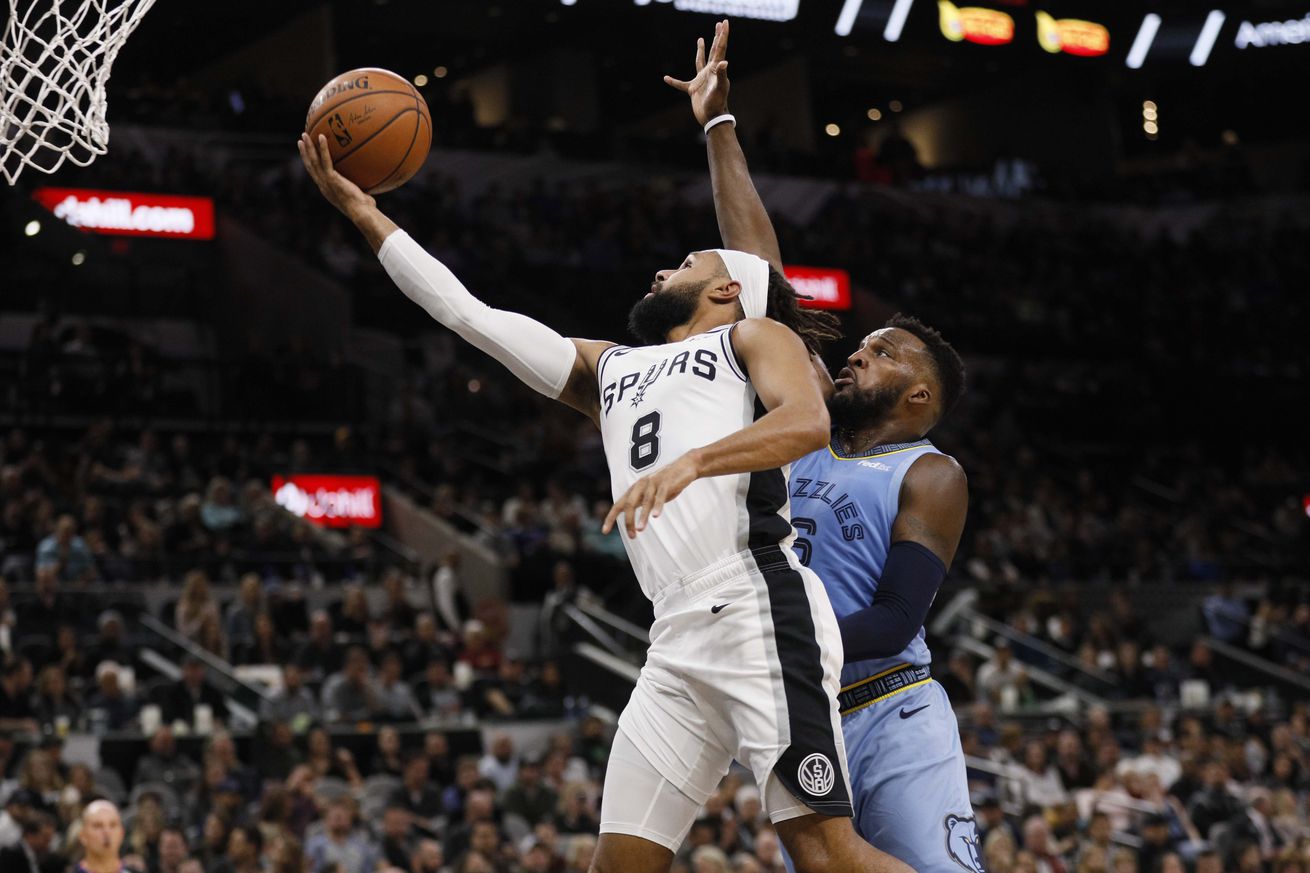 The Spurs go ahead on a late shot by DeRozan, but the Grizzlies prevail with Gasol’s free throws in the final second

The Spurs, led by 24 points from DeMar DeRozan, including an apparent game-winner to put the Spurs ahead with 1.2 seconds left, suffered a heart-breaking loss to the Grizzlies as Marc Gasol hit free throws to give the Grizzlies the win with just 0.7 seconds left. LaMarcus Aldridge was pretty clearly fouled on his final shot, but the refs swallowed their whistles as they let the Grizzlies escape the AT&T Center with a 104-103 win.

Marc Gasol won the tip and that led to a dunk in the lane for Jaren Jackson Jr. off a sweet assist from Mike Conley. Rudy Gay put back a missed LaMarcus jumper to even it up early for the Spurs. Dante Cunningham kept his perfect shooting streak going with a deep shot, but Garrett Temple and Conley were hitting too, and the Grizzlies led 13-9 five minutes into the quarter. Former Spur Kyle Anderson stretched the lead with a triple and the Spurs were down 7 halfway through the quarter. They stretched it to 10 before DeMar Derozan somehow created space in the lane to sneak a layup past Gasol. The bench entered the game, and slowly cut into the lead and overtook the Grizz 25-24 on a Poeltl fast break dunk. JaMychal Green answered with a triple, but Bertans one-upped him with a four point play. After their 22-8 run to finish the quarter, the Spurs led 32-30 after 12 minutes of play.

Aldridge got past Gasol to score the first points of the second quarter on a layup. The Spurs got foul happy early, and they were in the bonus with 9 minutes left in the quarter. Omri Casspi did damage for the Grizz as they regained the lead with 8:17 left at 39-38 on a layup over Aldridge’s outstretched arms. Gasol benefited from a friendly whistle, running over Quincy Pondexter, but somehow having it called as a blocking foul on Q-Pon. The Memphis lead got up to 5 but the Spurs fought back with LaMarcus banging in the paint with Jackson Jr. and getting free throws. LaMarcus scoring inside was a winning strategy, as he tied up the game on a fast break alley-oop at 52. Jaren Jackson Jr. put Memphis up with a triple, but picked up his fourth foul on the return trip with a hack on Dante Cunningham, compounding the mistake by arguing the call and picking up a tech. Patty tied up the game with a triple at 57, but the Grizzlies outscored the Spurs 4-2 in the final minute to lead 61-59 at the half.

The Grizzlies scored the first points of the second half with JaMychal Green taking a Kyle Anderson pass for an easy bucket. The Spurs regained the lead with triples from Gay and Cunningham, but it was short-lived as the Grizz went on a 6-0 run led by Kyle Anderson’s sneaky moves in the paint. The Grizzlies stepped up their defense, which forced Spurs turnovers staking Memphis to a 5 point lead halfway through the quarter. Marc Gasol got untracked on the offensive end as he got open shots with smaller players defending him. The benches came in for the last few minutes of the quarter and things got a little ragged, but the Spurs limited the damage, with Memphis leading 81-77 after three. The Spurs had a bad offensive quarter, only scoring 18, but still managed to not lose much ground to Memphis.

MarShon Brooks scored the first points of the final quarter, and Rudy Gay answered with an and-one dunk to cut the lead to three. Gay and Conley traded baskets, and the Spurs got the ball in the paint to LaMarcus, who failed to reach the rim on a 2 foot shot. Despite LaMarcus not hitting shots, the Spurs kept feeding him, and he drew fouls, tying the game at 86 with 9 minutes left. Finally, the Spurs regained the lead 90-88 on a Bryn Forbes layup, he got blocked, regained control and bounced it in. That lead that was wiped out at the next timeout when the refs took away a shot that Forbes launched after the buzzer earlier in the quarter. LaMarcus, now involved, was diving for loose balls and energizing his team. Rudy Gay provided scoring punch, once again putting the Spurs ahead 95-92 with just over 4 minutes left with an and-one over Kyle Anderson. Mike Conley regained the lead for the Grizz, but the Spurs fought back with buckets from DeRozan and a LaMarcus putback of a Patty Mills miss and led by a point with two minutes left. The Grizzlies were the first team to 100, but the Silver and Black regained the lead of a pair of free throws from Rudy Gay. Conley regained the lead for them. The Spurs regained the lead with 17 seconds left and looked to be in trouble as the Memphis defense pressured them. But somehow, DeRozan got off a shot, and the Spurs has the lead with 1.2 seconds left. The Grizzlies advanced the ball, and they got the ball to Marc Gasol, who was fouled by Rudy Gay. He hit both of his free throws, and there were 0.7 seconds on the clock for the Spurs. LaMarcus was obviously fouled on his shot attempt, but the refs let it go, and the game was over, Grizzlies win 104-103.

I think the way that Kyle Anderson plays basketball is almost like the way that Christopher Walken dances. It’s a little surprising that someone that looks like that is so amazingly graceful.

The Spurs now have a losing record at 8-9, and can’t relax at all. The Spurs go back on the road for a four game road trip. After a one day Thanksgiving break they play the Pacers in Indiana on Friday at 7:00 PM, then the they go to Milwaukee for a game against Giannis Antetokounmpo on Saturday at 7:30. The Spurs have struggled on the road this year (and last), and it will be difficult for them to pick up wins on this trip. Happy Thanksgiving, and see you in the game thread on Friday!