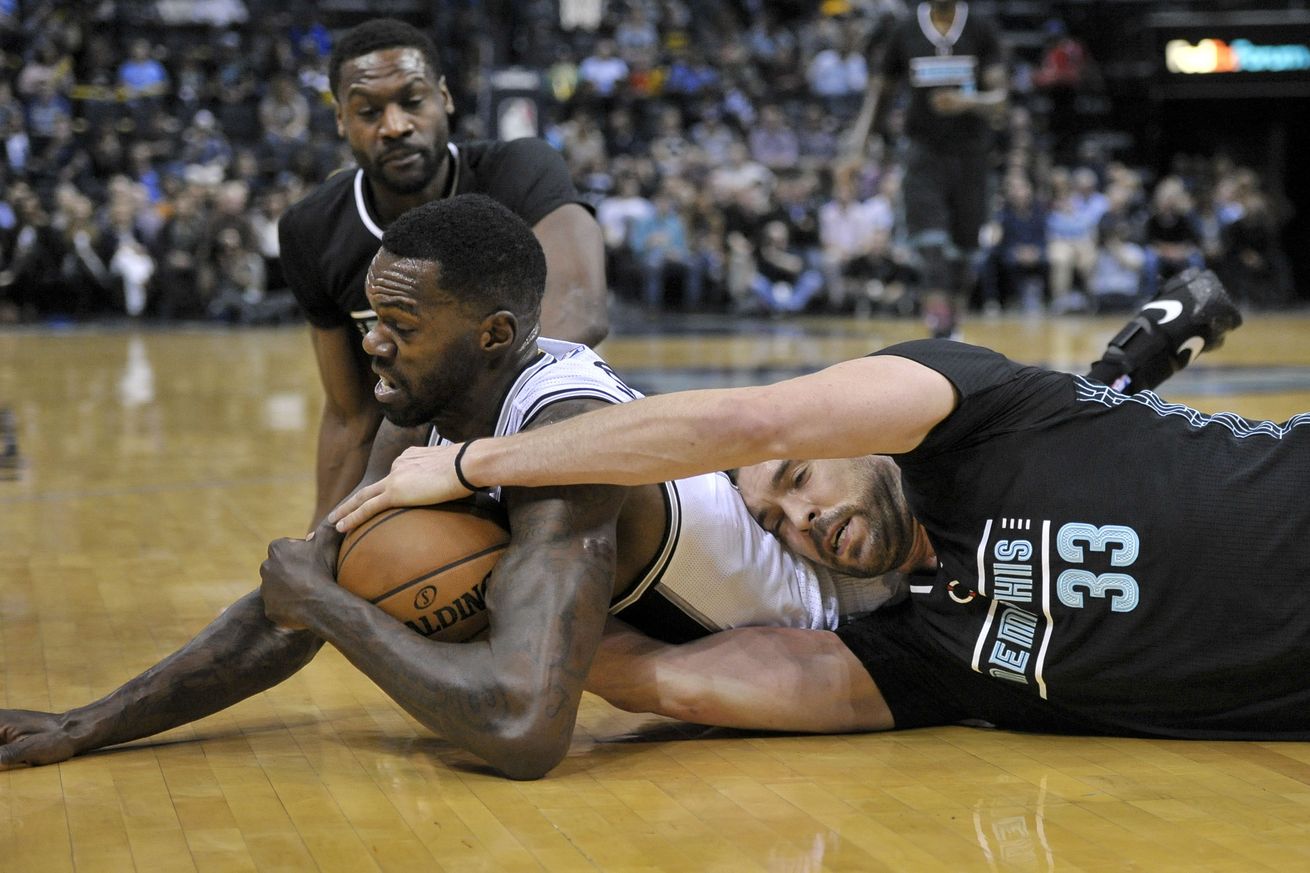 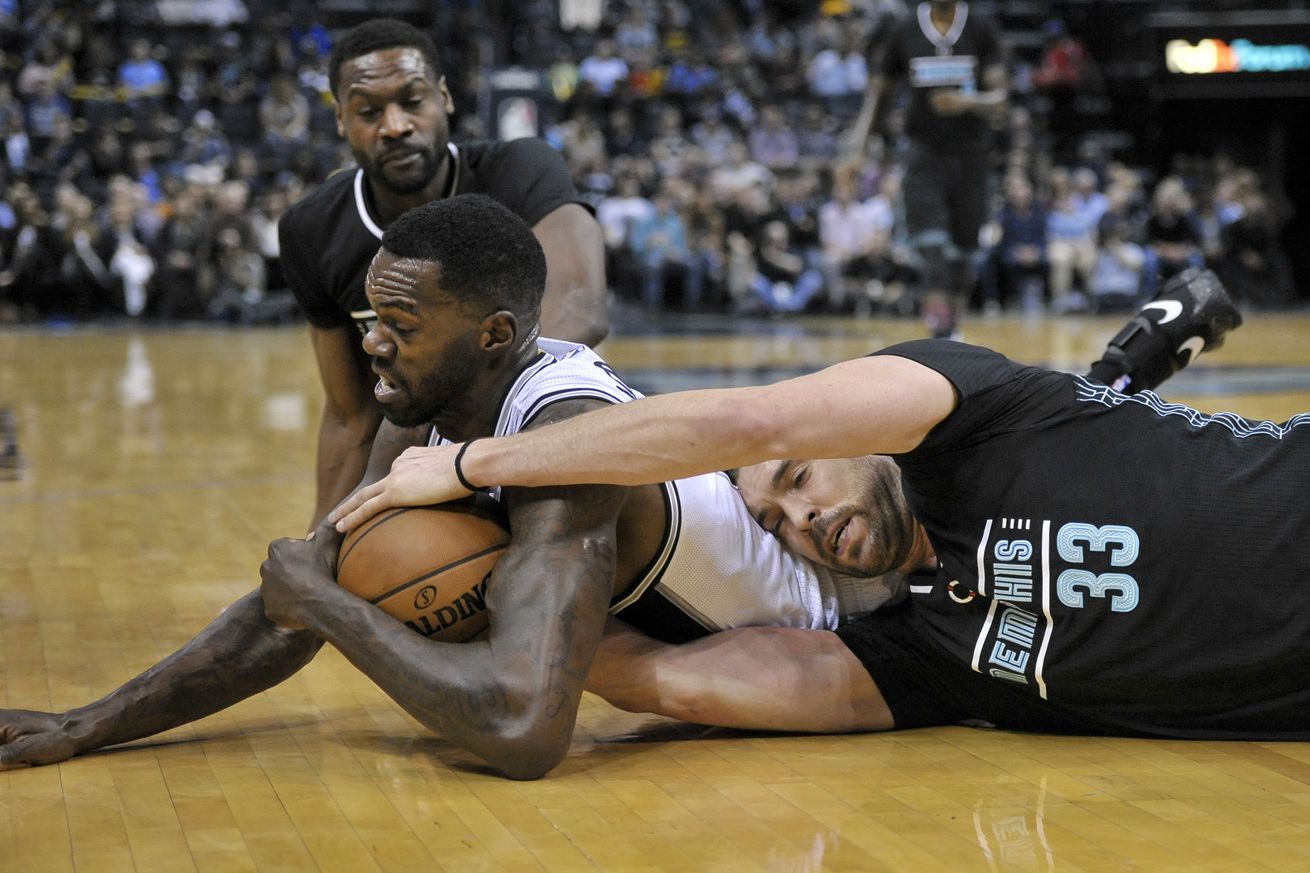 Before San Antonio and Memphis tip off tonight, we catch up with a colleague over at Grizzly Bear Blues to see where the two teams are currently looking like.

If the postseason started today, it would be the Spurs and Grizzlies facing off (once again) in the first round. If that weren’t reason enough to check in on Memphis, the two teams are also playing tonight, with San Antonio still in the mix for the one seed and the Grizzlies a game out of the five seed.

I chatted with Ross Jarrar (follow him on Twitter at @asaprockytop) from Grizzly Bear Blues about former Spur JaMychal Green, their changes at head coach, and what it would take for Memphis to take down San Antonio in the first round, among other things. I hope you enjoy.

Ross Jarrar: Kawhi Leonard started to gain a national support for his MVP support after his performance against the Houston Rockets. Not asking you to make a prediction as to who will win, but is he the MVP?

Bruno Passos: Whether he is or isn’t seems to depend on what definition you go by. Is he the guy with the most impressive stats? No, there’s a dude averaging a triple double. Is he considered the best player in the league? That would still be LeBron, by most people’s estimations. Is he making the biggest impact on a team’s chances of winning a championship? I think so. He’s quietly become one of the best offensive players in the league which, combined with his defensive presence, makes him something of a unique superstar in today’s game. He’s the go-to scorer on the league’s second-best team (almost first) and the best defensive player on the NBA’s best defensive team. That’s a hell of a resume if you ask me.

Marc Gasol is bombing away from three and having another great year; Mike Conley is still doing his thing. With both guys locked up for the foreseeable future, what does this core need to move up the Western Conference ladder?

RJ: Well, this answer depends on the health of Chandler Parsons. The Grizzlies gave him the maximum contract over the summer for a reason, other than just filling the space. If Chandler Parsons can be the player he’s fully capable of being, it gives the Grizzlies the exact player they need to go to the next level. Mike Conley and Marc Gasol are an amazing duo in pick-and-pop/roll situations, but having Parsons healthy and shooting near or above his career averages will be a huge advantage going forward for the team next year and beyond. This year, however, the team just needs consistent spot-up shooting to ease the pressure off of Gasol and Conley.

Speaking of Kawhi, he did not play in the Grizzlies and Spurs only match-up of the season thus far, what is something new to look for from Kawhi this season that Grizzlies fans haven’t seen?

BP: His playmaking has improved tremendously. In the last two-and-a-half months he’s not only averaging around 30 points per game but also close to 4 assists, which forces teams to gameplan for him in a completely different way. He’s comfortable creating in the pick and roll, passing out of double teams, or finding the open guy when he’s forced baseline. It’s amazing how, despite how much he’s improved since his rookie year, he continues to add new facets to his game.

JaMychal Green is a former Spur who seems to have found a home in Memphis. Could you talk about the role he’s filled with the Grizzlies and whether or not you think he fits into their long-term plans?

RF: JaMychal Green has become one of my favorite players this season. He always tries hard and he’s an efficient shooter that can hit threes on occasion, which Grizzlies fans can attest is a prized trait around these parts. Zach Randolph has been moved to the bench partly because JaMychal has become really reliable as a 4 next to Marc Gasol. Randolph can still produce, and he wouldn’t have been benched if JaM couldn’t produce.

As for him fitting into our long-term plans, I would certainly like him. But bigs that can rebound and stretch the floor are a hot commodity in the NBA today. JaMychal is an unrestricted free agent this upcoming summer and he’s definitely getting starter money ($14-18 million) a year. The Grizzlies front office and coaching staff might be high on Green as a talent, and I would love to have him, but they might be hesitant to max out the salary cap for him.

Along the same lines, Gregg Popovich is master of constantly evolving and changing his teams over the years and never becoming stale. What are new wrinkles the Grizzlies should be on the lookout for from this Spurs team, game plan wise?

BP: Alley oops! The Spurs are suddenly brimming with guys who can play above the rim, and Pop is making use of them. It helps that the team also has a number of incredible passers which, combined with the team’s motion-heavy offense, opens things up for lobs. There were entire seasons in the past where they would only tally one or two alley-oop dunks — this year, they must be up to around thirty. It’s not quite Lob City, but that’s a big change for San Antonio and it’s been really fun to watch.

Manu Ginobili and Vince Carter are the league’s two elder statesmen. What has Vince done to remain effective at the age of 40?

RF: The biggest key for Vince Carter is his health. His athleticism clearly isn’t the same as his heyday in Toronto, but he still shows flashes of being ageless like his huge dunk in Atlanta on Thursday night. But with decreased athleticism overall, it’s important to at least have availability on a night-to-night basis. He hasn’t missed a considerable amount of time for injuries in quite some time and his consistency is pretty stabilizing the team.

He’s also one of the more efficient shooters on the team. He just had a perfect shooting night against the Bucks (8-8 from the field), and he’s 4th on the team in 3-pointers made. That helps VC be a very solid rotation player and now-starter after the Parsons injury. Vince isn’t an old vet just hanging around to cash a check, he’s actually a necessary piece for this Grizzlies team.

Maybe VC wouldn’t be playing on better teams, but he fits exactly what the Grizzlies need from a rotation player, and a 19-year veteran is a good source to get it from.

What’s been the impact of Dewayne Dedmon being inserted in the starting lineup?

BP: Speaking of alley oops, here’s the guy who’s been on the receiving end of most of them. Dedmon’s been a revelation, and it’s incredible how early into the season people were calling for this guy who was a relatively unheralded offseason signing to get all the minutes he could handle. His move to the starting lineup hasn’t been as positive in the advanced stats as I imagined it would be (he’s had a minus net rating since the change), but it still seems to be the right call by Pop. He’s one of the team’s best defenders, replacing one of its weakest (Pau), which means teams can’t prey on Tony Parker in the pick and roll as much. He also runs the floor extremely well and is a handful on the offensive glass.

Dedmon still has issues with getting into foul trouble, and Pop has actually not been finishing games with him all that much lately, but he helps the Spurs set a defensive tone early in games and he allows Pau to eat up opposing team’s second units. That’s not unlike what Zach Randolph is doing for Memphis now, right?

On the Memphis coaching side, what’s been the difference in year one under Fizdale versus the Dave Joerger era?

RJ: I think the biggest change between the Joerger and Fizdale coaching regimes has to be the 3-point arc. Dave Joerger did a great job with the personnel he had, which was lacking, but the 3-point shot was always something the Grizzlies needed more of. The entire league is shooting more 3-pointers this year so the uptick in 3-pointers is expected, but the 16-17 Grizzlies have a better league rank than the 15-16 Grizzlies in 3-pointers made, attempted, 3-point percentage, and 3-point attempt rate.

The 15-16 Grizzlies were absolutely crushed by injuries, however. Joerger still managed to lead an extremely thin team into the playoffs when it could have been absolutely disastrous. The Grizzlies last year always gave great effort and tried no matter who was in or out of the rotation that day, and that has to be a testament to Joerger’s ability as a coach.

But Fizdale is taking a team with more-or-less the same personnel as Joerger had for his tenure and turning them into a league average 3-point shooting team. And that’s with dealing with Chandler Parsons and Andrew Harrison’s shooting.

The emphasis on the perimeter game was a long time overdue and David Fizdale luckily brought it.

This is a likely playoff matchup if the Spurs are a #2 seed, but the Warriors’ lead over San Antonio is fragile. Do you think the Spurs will end up with the #1 seed?

BP: With the Warriors’ recent struggles and the return of LaMarcus Aldridge (he was temporarily sidelined indefinitely due to a heart arrhythmia), I still like the Spurs’ odds to get the one seed. They hold the tie-breaker over Golden State and still get to face them one more time at home when the Warriors will be on the end of a back-to-back. Neither team will sacrifice health over getting the top seed, but I do think San Antonio needs it a bit more than Golden State.

Let’s say these two teams do meet in the first round of the playoffs. Finish this thought: Memphis eliminates San Antonio if…

RF: …Gregg Popovich decides to leave the Spurs for a Food Network gig where he and Tim Duncan test wines in different places.

Seriously, the Spurs are an extremely good team this year. It’s going to be hard for a team with Memphis’ offensive capabilities (or lack thereof) to compete with them. The Grizzlies have a good defense, however. So if the Grizzlies can force the Spurs out of rhythm with aggressive defense, the Grizzlies will have a chance to have a chance. The Grizzlies are going to need to play that great defense PLUS hit their 3’s at an abnormal (for Memphis) rate.

Also, if the Spurs suffer an injury in their front court, it may open up an advantage for the Grizzlies. If any Spurs big is out for any stretch in the first round, it may provide an opening for a good rebounding team like Memphis.

That’s where we are, needing injuries to beat the Spurs in a 7-game series. I will never root for an injury, so I may just root for the Food Network option.