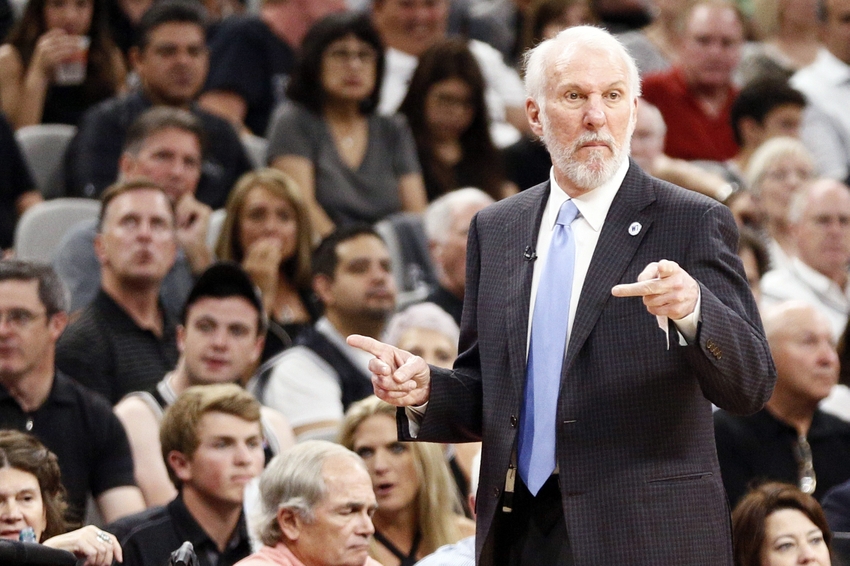 There was a time circa 1998-1999 that everyone knew exactly what the Spurs were going to do. “4 Down”, also known as “give it to Duncan in the post, and spread out” was the go to play.

Tim Duncan would go to work, either score, or draw a double team and swing the ball back out to a teammate. Occasionally, a man would cut to the basket, or David Robinson would roll to the basket if his man was foolish enough to leave him, and Duncan would find them.

There was nothing wrong with this simplistic offense. Combined with the Spurs historically stingy defense, it was highly effective. It proved the old adage, that keeping plans simple works best. If you get too complicated, too many things can go wrong.

However, as the Spurs roster developed over time with the monumental additions of Parker and Ginobili,  Pop evolved with the times and the arsenal at his disposal.

The Spurs player and ball movement on the court increased over the next few years. Due to Parker and Ginobili’s ability to get to the basket. This was inevitable. In 2012 that ball movement went to another level, and the phrase “good to great” started surfacing as a Spurs mantra.

In 2013 and 2014, the Spurs “beautiful game” reached its zenith as they passed the ball like never before. The Spurs have always been a high assist, unselfish team, so the fact that it went to a new high level is really saying something.

Something that Popovich has been a master at throughout the Big 3 Era though is the play calling. The Spurs after a timeout are the best in the business. Pop calls plays that deliver great looks time and time again, and to the players credit, they have executed these plays and hit huge shots time and time again.

Sometimes, they miss those shots, but the execution and master play calling has been very consistent regardless. Popovich is also great at sending in a play on the run during game action, and the Spurs players know how to execute the play smoothly and cohesively, giving them the best chance at success…..Read More