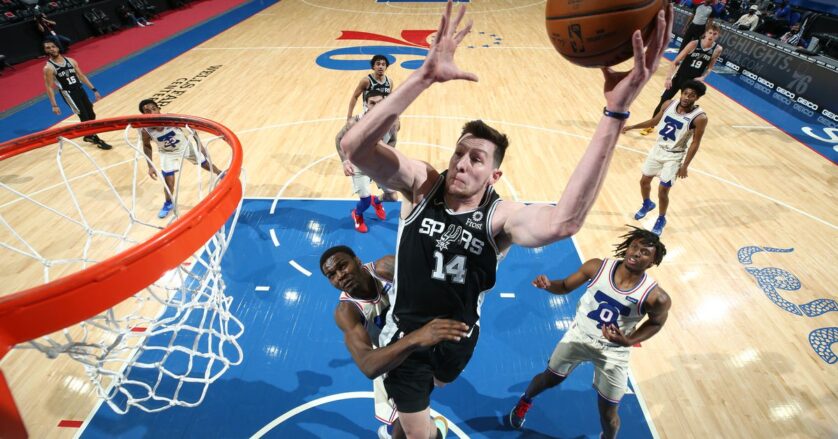 Welcome to the Game Thread. Veterans of the Game Thread know how we do things around here, but for all you newbies we have a few rules. Our community guidelines apply and basically say be cool, no personal attacks, don’t troll and don’t swear too much. Remember, it’s only a game, and unless you made a very unwise bet, the outcome shouldn’t affect your life either way. It’s OK to get mad, but don’t take it out on your fellow Spurs fans.

Six. The Spurs are 5 games ahead of the New Orleans by 5 games in the loss column, with 10 games to play, so since they have the head to head tiebreaker, they just need any combination of Spurs wins or Pelicans losses that add up to six to likely lock up a play-in spot. I forgot what happened on Friday night, but since the magic number is still at 6, I’m assuming it wasn’t good.

Or maybe I just don’t want to remember. Whatever, there’s another game to play tonight, against the Sixers, who routed the Spurs 134-99 in Pennsylvania on March 14. The Spurs can either be shellshocked by their abysmal performance in the second half against the Celtics, or build on what they did well early in the game. With Dejounte Murray questionable tonight with knee soreness and with a road game against the Utah Jazz tomorrow night, this is not a game the Spurs are expected to win, especially at home, where they’ve been bad. But the Spurs have made a habit of shredding expectations this year, both good and bad, so that means that they have a chance tonight against the Sixers, especially if they don’t take their opponent seriously. Let’s watch and see.

They say that failure is a teacher, just like an old-time preacher. The changes it brings can be gainful, but why do the lessons have to be so painful?