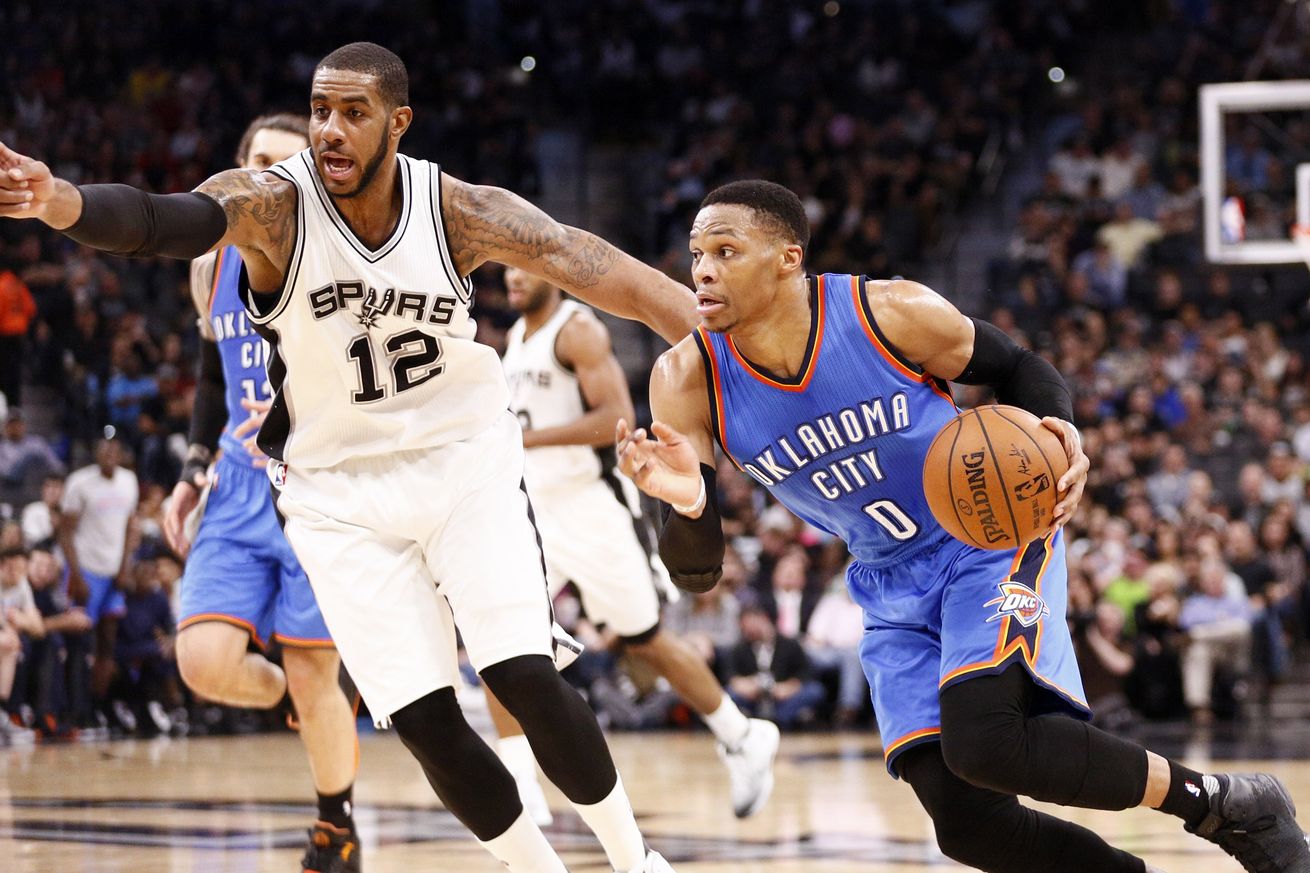 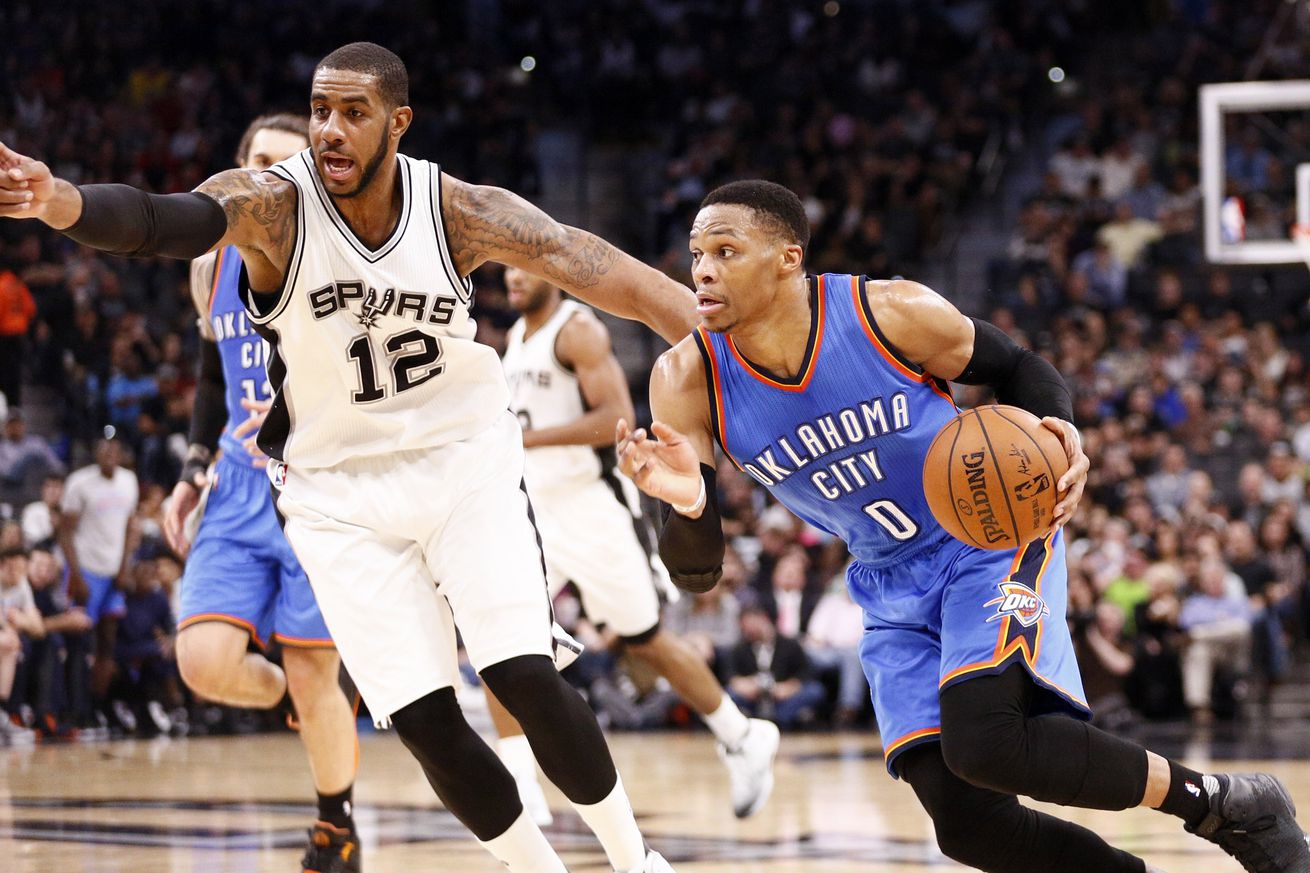 Oklahoma City’s recent slide, a four-game losing skid against four non-playoff teams, increases its odds of drawing the San Antonio Spurs in the first round of the playoffs.

These teams seem preordained to meet in the postseason. Three of the past five seasons featured a Spurs-Thunder playoff series. Oklahoma City advanced in 2012 and 2016, with the Spurs blowing a 2-1 series lead in the latter series. The “Beautiful Game” Spurs ousted the Thunder from the postseason in 2014.

A fully formed Thunder squad, one with Kevin Durant, Russell Westbrook and Serge Ibaka, presented a natural mistmatch against the older and less agile Spurs. Last season, specifically, the Thunder’s athleticism wiped the Spurs off the floor. Passing lines were swallowed hole, among the thicket of arms gumming up the offense. Defensive intensity increased. San Antonio’s free-flowing offense stalled, while Oklahoma City feasted on uncharacteristic mistakes.

Ibaka and Durant are gone. The 2016-17 Oklahoma City Thunder feature the last man standing, Westbrook, in a leading role. He’s surrounded by complimentary pieces in Steven Adams, Victor Oladipo and Enes Kanter — none ofbwhich are fit to be Westbrook’s true co-star in the same vein as Durant.

Westbrook is balling, as you know. There’s the ridiculous numbers (32.1 points, 10.5 rebounds, 10.0 assists), history (currently the second player ever to average a triple-double in a season) and narrative (dragging his team into the playoffs by himself after Durant left for the 73-win Warriors) to prop up his MVP case. We will tell our grandkids about Westbrook’s season — a one-year case study centered on the question “can Russell Westbrook single-handedly capable of harnessing his boundless intensity into a playoff berth for his team?”

The answer is: yes.

Teams know what to expect against these Thunder, too. It isn’t a secret. Westbrook is the focal point of the offense, with a ridiculous 42.3 usage rate, yet he sets the world on fire anyway.

Oklahoma City has dropped to the seventh seed, a game back of the sixth-seeded Memphis Grizzlies. The fourth spot is still technically in play, but it will take a herculean effort from Westbrook to make up that much ground with a quarter of the season remaining.

As it stands, a first-round playoff series against San Antonio is the likeliest possibility for the Thunder.

Thursday night’s matchup pits the league’s two best teams in clutch situations (defined as any game in the last five minutes with a margin of five points or fewer).

San Antonio outscores its opponents by 22.2 points per 100 possessions in high-leverage situations, good for first in the league. Oklahoma City is +21.7 in 35 instances, good for second.

Both teams pare down the offense to its bare essentials in these moments — Leonard and Westbrook — letting them go to work. Without the guise of having to get his teammates involved, Westbrook can just be Westbrook. It has worked; the Thunder have won 60 percent of these contests in which Westbrook unlocks his superhero ability.

San Antonio has Kawhi Leonard, the ultimate basketball cheat code that can shift on to the opposing team’s best player in crunch time while handling the entire offense. He went enfuego Monday night and James Harden was the unfortunate recipient.

If the margin is close tonight, it’ll come down to which team’s superstar plays best.

For the Thunder fan’s perspective, visit Welcome to Loud City.