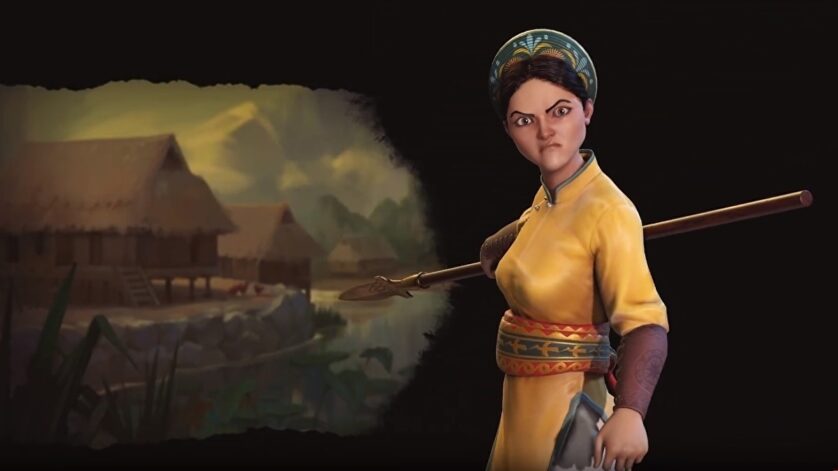 Vietnam, which is part of the New Frontier Pass due out 28th January, is led by Bà Triệu, also known as Triệu Thị Trinh or Lady Triệu. Bà Triệu fought against the occupation of northern Vietnam by the Wu Kingdom in the early 200s AD.

Vietnam’s unique ability is Nine Dragon River Delta, which makes all land speciality districts only buildable on rainforest, marsh or woods tiles. Buildings on each type of tile receive either additional science, production or culture. This ability also allows woods to be planted with the Medieval Faires civic.

Vietnam has a unique medieval era ranged unit called the Voi Chien, which can move after attacking. It’s more expensive than the crossbowman unit it replaces, but it’s stronger when defending and has greater sight.

And finally, Vietnam’s unique district is the Thanh, which grants additional culture for each adjacent district. Once flight is researched, the district generates tourism equal to its culture output. It doesn’t require a population and is cheaper to build than the encampment district it replaces.

Vietnam looks like a relatively flexible terrain-focused civ, which can shoot for on either science or culture, depending on the placement of districts. Firaxis suggests constructing buildings as quickly as possible to leverage their extra yields. Avoid desert, but don’t be afraid to settle in open plains or grassland, as Vietnam can plant woods early. However, rainforests can’t be planted, so think carefully before chopping them.

Woods, rainforest and marsh tiles owned by Vietnam offer the civ significant tactical benefits, turning Vietnam into “a defensive powerhouse”, Firaxis said. But if you choose your battle strategically, these tiles also allow Vietnam to render some crippling offensive attacks.

Watch out for forest fires and volcanoes, though – these can be especially devastating for Vietnam.

As mentioned, Civilization 6’s fifth DLC, the Vietnam & Kublai Khan Pack, launches on 28th January. Those who own the New Frontier Pass get this DLC, or you can buy it separately for £7.39.