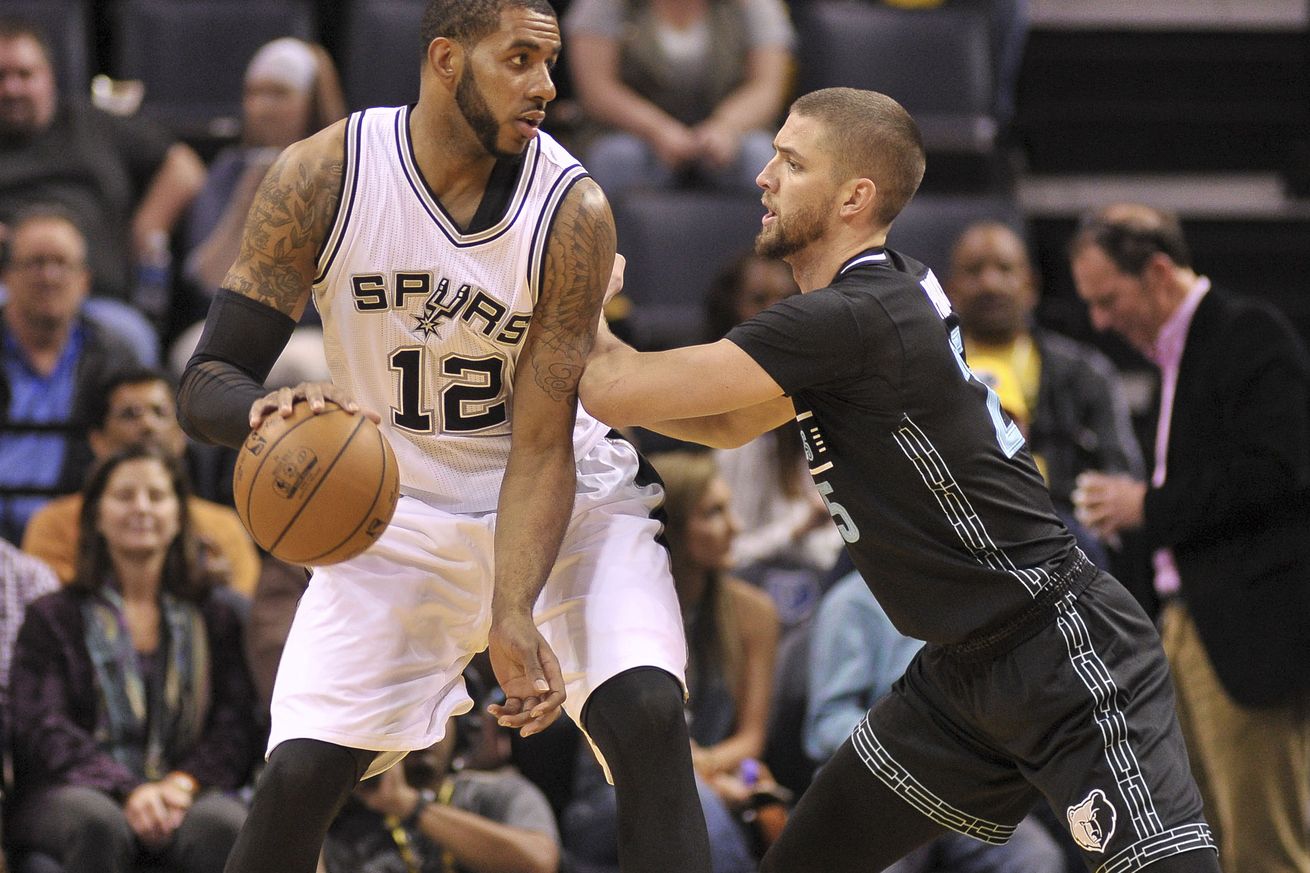 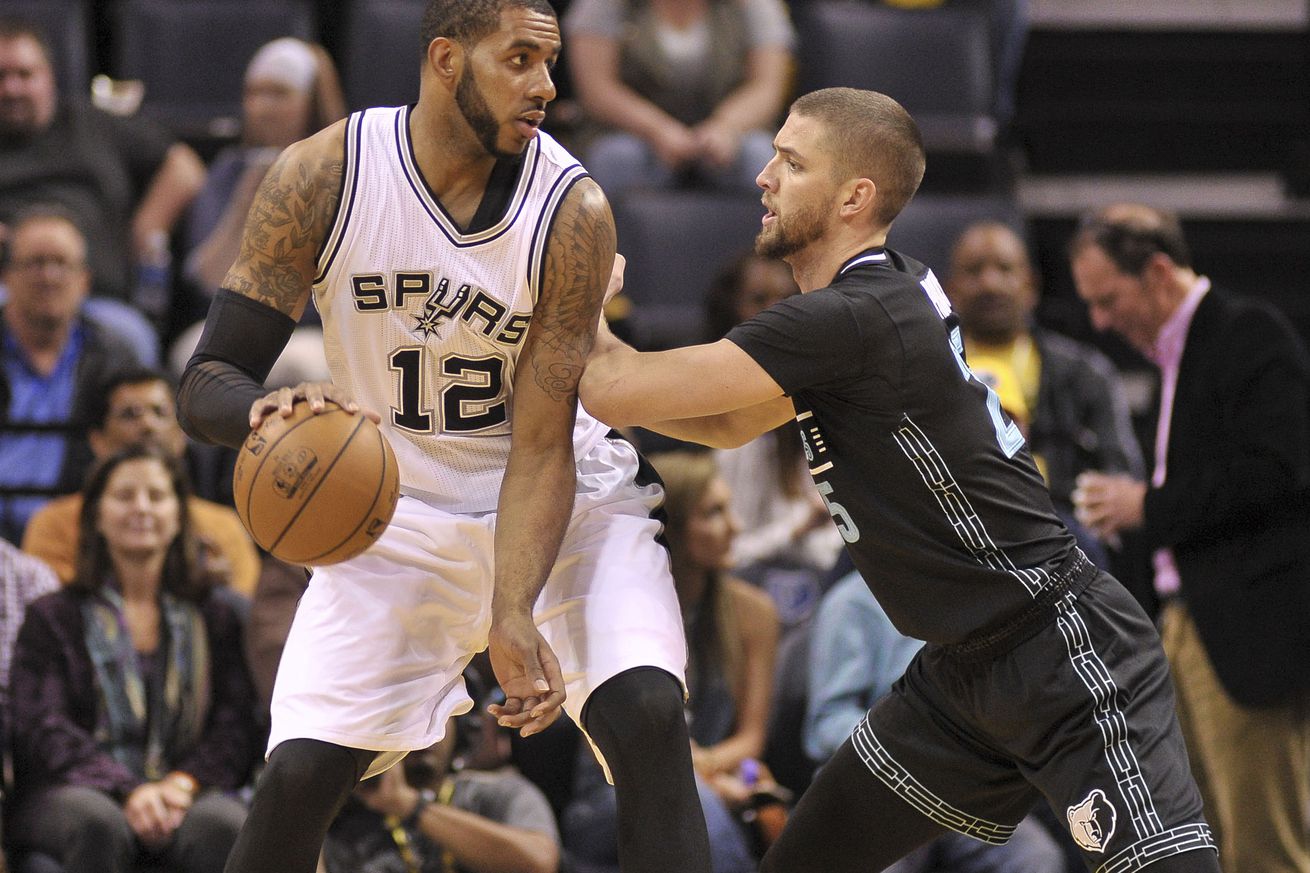 The Spurs couldn’t hit a basket against the hustling Grizzlies as they held them to a season low in points and won easily.

With Kawhi Leonard out with a thigh contusion, the Spurs struggled to score against the stout Grizzlies defense in Memphis tonight. Despite their struggles for most of the first three quarters, the Silver and Black still were in the game with a quarter, but a dismal performance from the Spurs’ offense, scoring just 9 points in the quarter doomed them to a loss. The Grizzlies defense completely shut down the Spurs late and at the end it wasn’t even close as Mike Conley, Zach Randolph and the Grizzlies walked off with an easy win.

Q1—Both teams were cold to start the game, and halfway through the first the score was tied at 6 each. It didn’t improve much after that, but the Grizzlies got Zach Randolph and JaMychal Green good looks at the basket with crisp ball movement to lead 17-14 after one.

Q2—The Spurs bench unit started to take the game back in the second quarter with tough defense from Kyle Anderson leading to a pretty layup at the other end. By the time Manu Ginobili scored on a Gervinesque finger roll, the Spurs had a 3 point lead.

The Spurs bench is doing things in the second quarter. Manu puts them up 3 here. pic.twitter.com/6nKoaGrX83

The Grizzlies earned back the lead with grit and grind play inside, but the Spurs shooting touch started to return and they made up the deficit. At the half, the score was tied at 40 each. In an era where offense is king, defense decided to usurp the throne. At least for a half.

Q3—The Grizzly defense started to harass the Spurs ball handlers and Tony Allen led the way with 9 points in the quarter to put them ahead by eight. But key shots from Manu Ginobili and Danny Green brought the Silver and Black back into it. But a late three point shot from Toney Douglas put the Grizzlies up 69-65 after three.

Q4—The Grizzlies were the aggressor to start the fourth, and after a circus shot from Vince Carter and a Brandan Wright layup, they led by 8. LaMarcus picked up his fifth foul and it was looking bad for the good guys, who couldn’t figure out how to score, starting off 1-14 in the quarter. The Grizzlies defense was relentless. LaMarcus got free on a fast break, but he ended up turning over the ball. The Spurs couldn’t even hit free throws and Mike Conley’s layup and one put Memphis up 83-70 with just under 5 minutes left. It’s probably best not to recount what happened for the rest of the quarter as the Spurs only scored 9 points in the quarter and lost 89-74.

Appropos of nothing, here’s a song about a guy who says he’s Rick Springfield, sung entirely in (bad) French

The Spurs record is now 39-12 and they are in second place in the Western Conference behind some team that blew a 3-1 lead in last years’ finals. The Rodeo Road Trip continues on Wednesday with game two against the 76ers Wednesday at 6 pm. You may want to leave work early then to make it home before the tipoff. Philly coach Brett Brown said he doesn’t know if Joel Embiid will be back in the lineup by then.