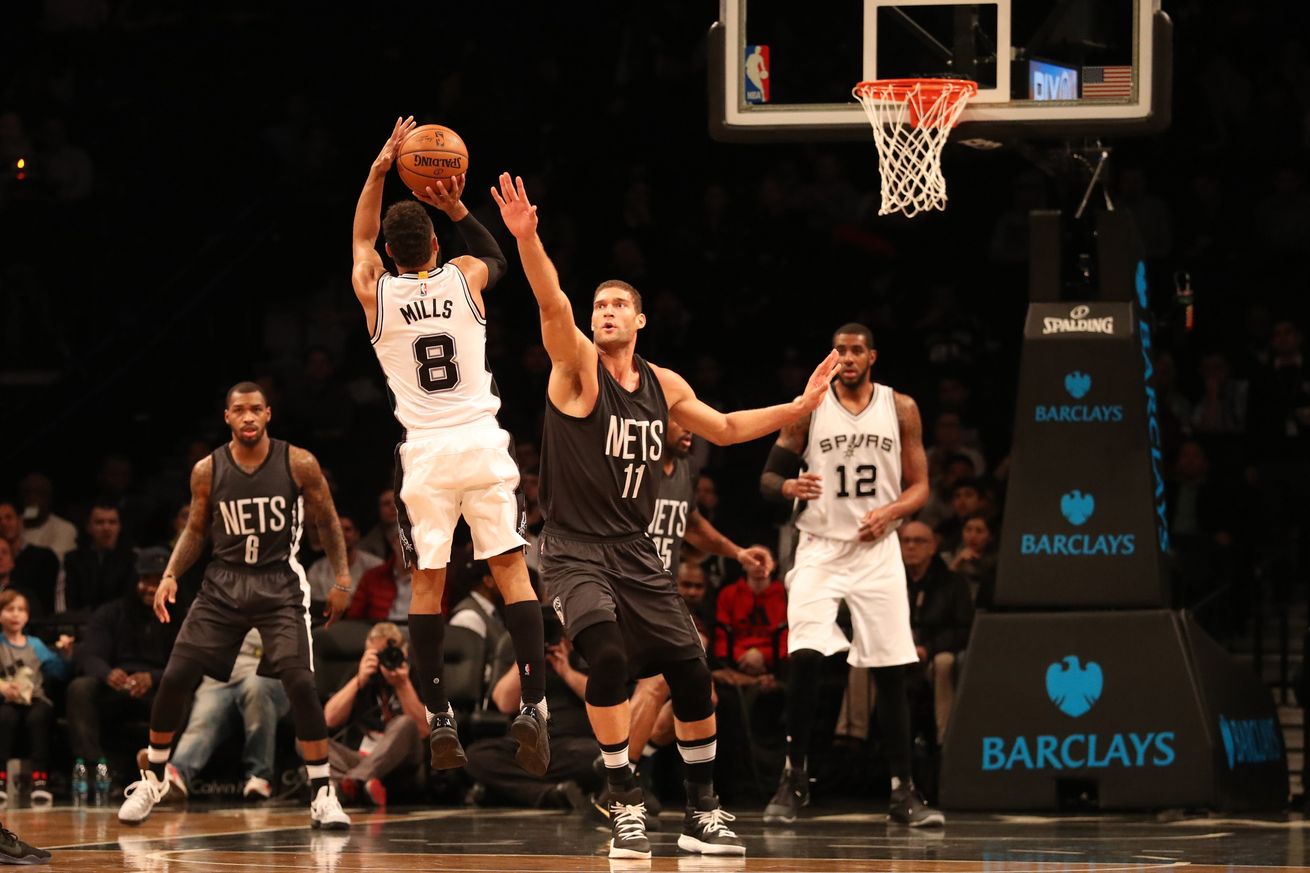 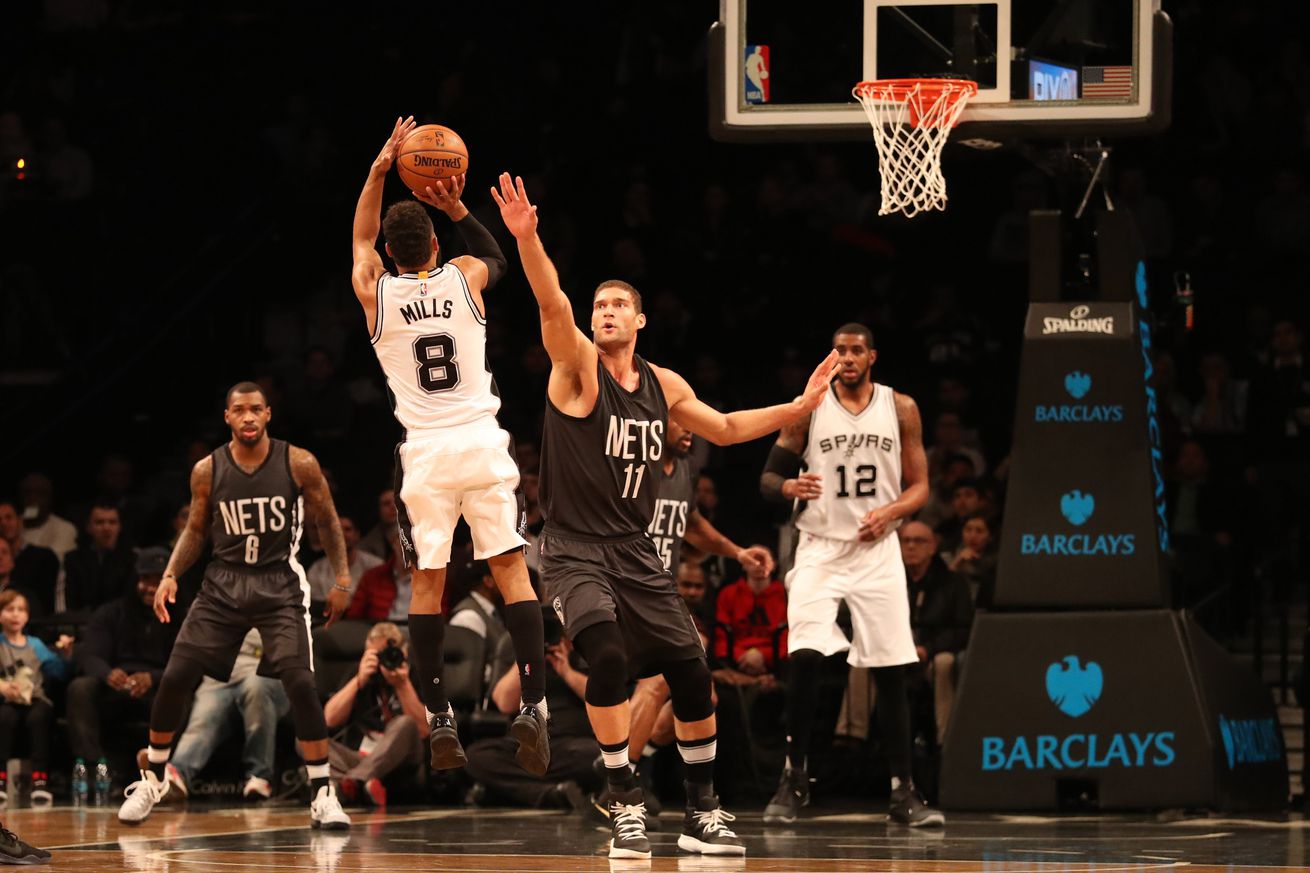 The Spurs were missing three players out of their starting layup tonight, but they had no trouble disposing of the Nets with good games from Patty Mills, David Lee, Jonathon Simmons, and Lamarcus Aldridge.

No Tony, no Pau, no Kawhi, no Manu, no problem. The Brooklyn Nets aren’t a team devoid of talent, but they don’t have any star players. The Spurs were missing four of their best players tonight, but the players who were available to play for the Silver and Black tonight were plenty good enough to overpower the Nets as the Spurs dismantled the team from Brooklyn. Kyle Anderson had his best game of the season, David Lee and Dewayne Dedmon provided punch in the paint, and Patty Mills hit shots at will. Lamarcus Aldridge and Danny Green provided veteran leadership for the young team on the floor. Davis Bertans also deserves mention as he hit key shots and played tough defense when he was called upon.

Missing Kawhi Leonard, Manu Ginobili The scoring started with a Robin Lopez postup to put the Nets up by two. Lamarcus Aldridge answered with a jumper but the Nets went on a 7-0 run with Spencer Dinwiddie and Bojan Bogdanovich providing scoring punch in addition to Lopez’s inside play. Dinwiddie and Kyle Anderson traded threes and the Nets were up 15-9 halfway through the quarter. Lopez tried backing down Aldridge, but he ended pounding the ball for so long that he got a rare 5-second call for a turnover. Both teams were pretty inefficient on offense, but the Spurs cut into the lead with Aldridge blocking shots and Kyle stealing the ball and blocking shots from the Nets. Danny Green had his moments on offense too.

LaMarcus draws a double on the post up, kicks to Danny Green for a Tar Heel Triple pic.twitter.com/H4VoNlemTh

Davis Bertans got in late in the quarter and got fouled by Rondae Hollis-Jefferson to give the Spurs a 25-24 lead. After a Bertans assist of David Lee for a dunk, the Spurs led by three, but once again the Spurs defense broke down at the end of the quarter and Isaiah Whitehead scored the final points for the Nets to bring the score to 27-26.

The second quarter started with neither team able to buy a basket, but there was a little drama as Robin Lopez kicked Jonathon Simmons’ foot to trip him after Simmons fouled him on a rebound attempt and was assessed a technical foul. The Spurs offense was a little stagnant, and the Nets crept back into it to tie it at 32 about a third of the way through the quarter. The teams traded baskets but the Spurs edged ahead with Lamarcus abusing Justin Hamilton under the basket. When the Spurs moved the ball, they got open shots like Patty’s straight on three that that put the Spurs up 42-38. After a Lee free throw, Trevor Booker got free in the lane for a poster dunk. But Brooklyn started to get careless with the ball, and the Spur took advantage of the extra possessions to get Patty open looks which he sank to get the Surs up by ten. The Nets got the ball with just over 24 seconds left, but couldn’t get a shot off in time and the Spur had a chance to take the last shot with 1.7 seconds left. Davis Bertans took a shot from beyond half court that bounced off front of the rim. Even with the miss, the Spurs led 52-42 going into the locker room.

David Lee started the second half and scored the first points as ball movement got him an open layup at the basket. The Spurs continued to give Dinwiddie open looks at the basket and he obliged with a three point shot. But the Nets had trouble defending the paint, and Kyle Anderson got wide open layups as the Spurs ran out to a 62-47 lead two and a half minutes in, leading to a quick Kenny Atkinson timeout.

That’s three straight Spurs possessions that end with a layup/dunk from Anderson. pic.twitter.com/bH3ZLaNw8g

Trevor Booker started to cook and after an and-one and a layup from him, Pop decided to talk to him team. Time out for Coach Popovich, with the Spurs up 66-54. Lamarcus started to heat up from midrange, and it was lights out for the Nets. When Patty Mills hit a three with 4 minites left in the third, the lead extended to 21. Jonathon Simmons confidently hit his open shots and the good guys continued to pour it on as they extended the lead to 25 points with Davis Bertans getting in the action. The lone bright spot for the Nets was a steal by Isaiah Whitehead leading to a breakaway layup and foul. It was like a poor man’s Kawhi Leonard. The Spurs led 91-69 after three.

The fourth quarter was extended garbage time, but it was useful for the Spurs young’uns as Dejounte Murray scored his first points and worked on his floater. Joel Anthony got in the game late for his first action of the season, just having been signed to a 10-day contract earlier in the day. The Nets looked hapless and the Spurs kept extending the lead whoever they put on the floor. The Spurs ended up winning 112-86.

[This band’s from Brooklyn]

The Spurs play travel to Toronto tomorrow to play the Raptors who have been in a bit of a slump lately, but they still have the talented backcourt duo of Kyle Lowry and Demar Derozan. Then the Spurs don’t play again until Friday until they go to New Orleans to play Anthony Davis and the Pelicans. AD has been out with a thigh bruise, but he could be back by then. For the sake of the Pelicans, I hope he is, because they don’t have a whole lot of talent without him on the floor.