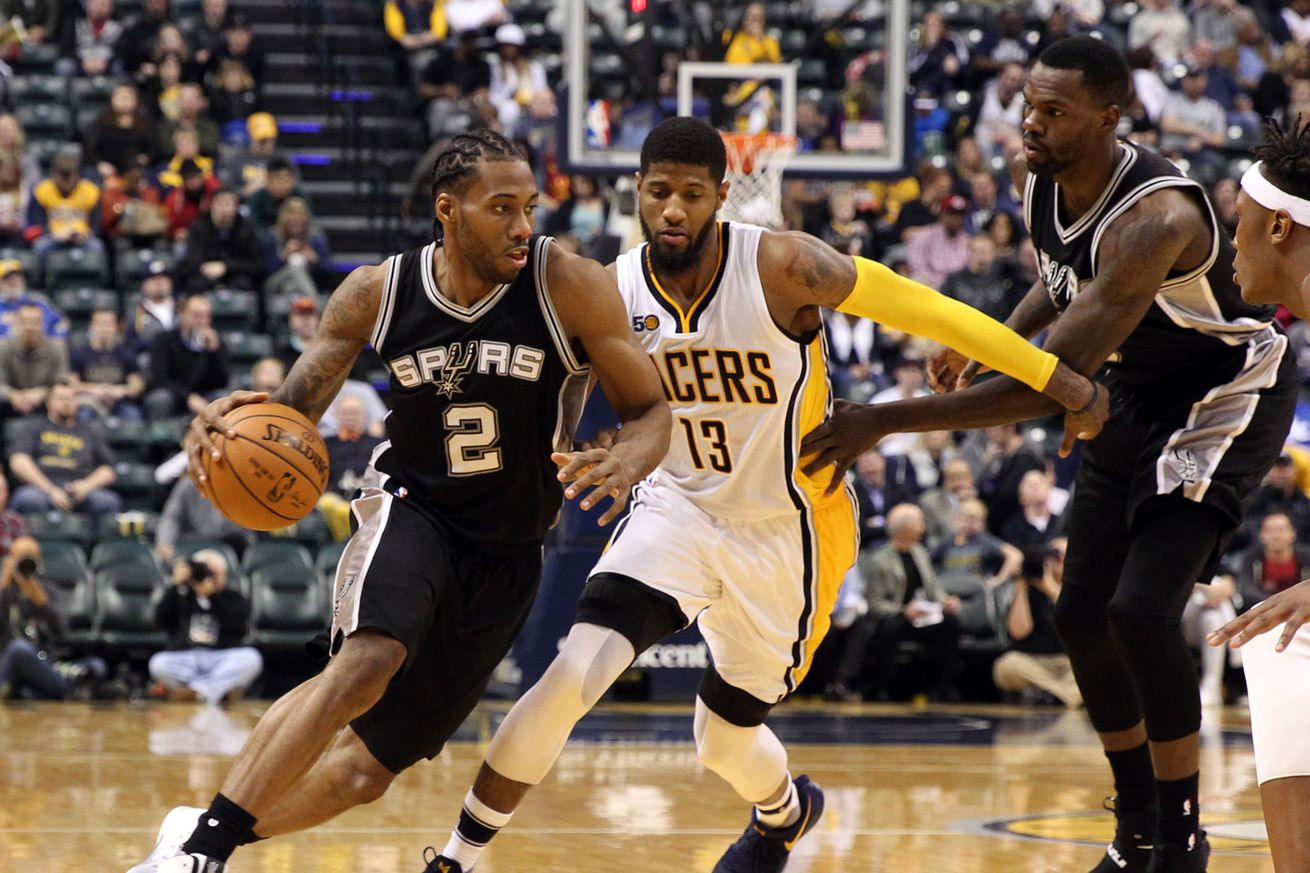 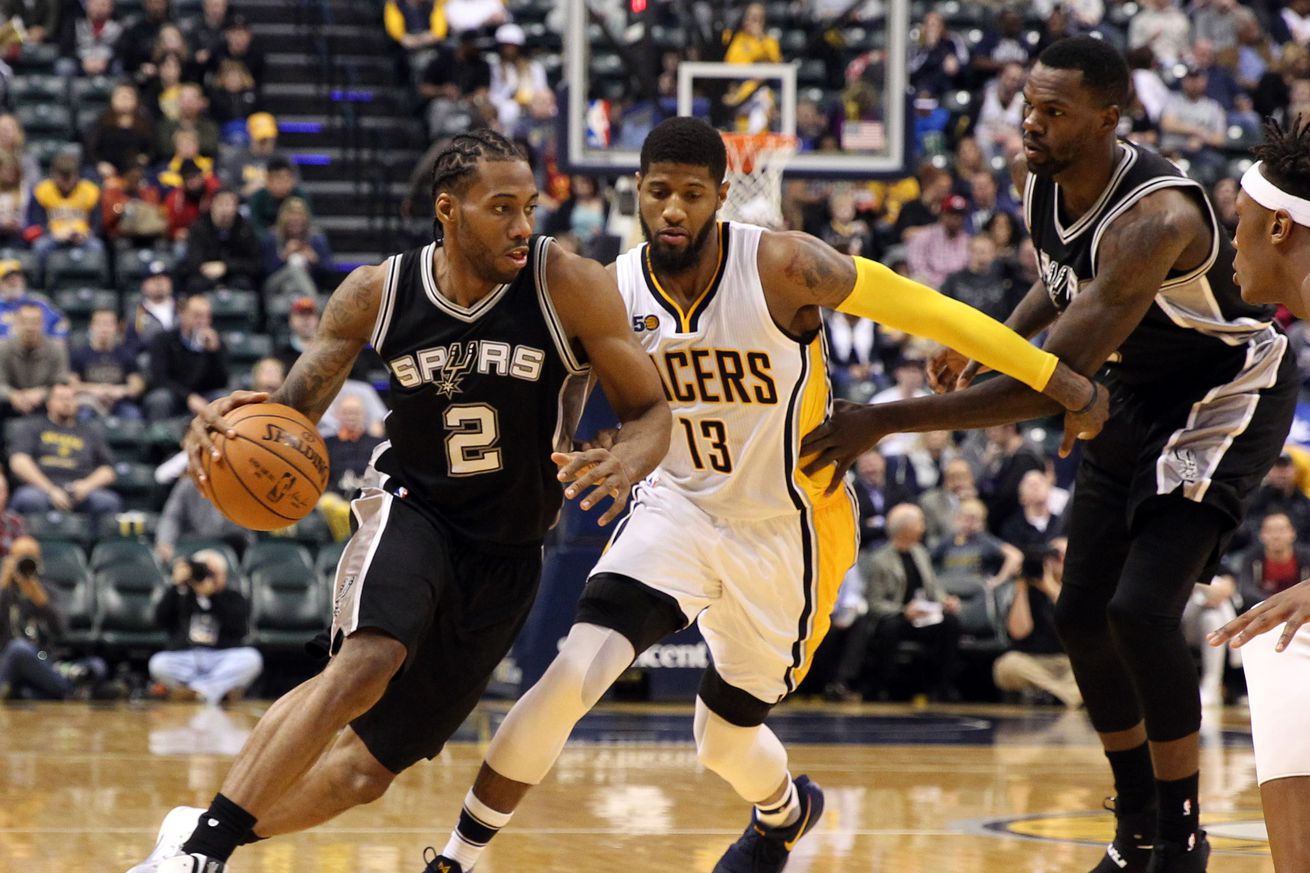 Just in time for Valentine’s Day, the Spurs’ play goes from sour to sweet with a victory over the Pacers

Valentine’s Day is a time for reflection and appreciating relationships, including your relationship with your favorite basketball team. I know some of you have been feeling let down by the Spurs in general and some of the Spurs’ more lucratively compensated players in particular. You’re a little bit frustrated that your man Danny Green spent all night at a fantasy baseball draft instead of taking you to see Hidden Figures. You’re fuming that LaMarcus Aldridge left all the kitchen cabinets open, and not too thrilled that Tony Parker brought you home Diet Snapple even though you’ve told him a thousand times how bad aspartame is. Sometimes (all the time) love and basketball means taking the bad with the great.

After the 94-90 loss to the Knicks on Sunday afternoon, Spurs coach Gregg Popovich sounded a bit like he was reminiscing on love and marriage. ”The grass looks greener and the sky’s blue more often when you win a game than lose a game,” he said. For the Spurs, who shot 36% in the game against the Knicks, the ground could not have looked more parched nor the sky more ashen. Each of the team’s 21 offensive rebounds in the contest was followed in turn by an offensively bad shot or turnover, none bigger than Patty Mills’ breakaway-turned-backbreaking-throwaway with 2:50 left in the fourth quarter and the Spurs down two. A Carmelo Anthony triple on the other end pushed the New York’s lead to five and finally gave a haunted Knicks team a brief respite from its season-long sideshow.

Against a squad that recently allowed the Denver Nuggets to score 30 points in all four quarters, and is retroactively burning Phil Jackson’s basketball and management credibility to the ground on a daily basis, the Spurs barely managed 40 in the second half. They displayed little continuity on offense from possession to possession other than “give Kawhi Leonard the ball and punch in the Kobe cheat codes.” (Which gives us an excuse to watch this again:)

The loss was the romantic equivalent of planning a Sunday picnic only to see your beau spend the entire day watching football from the couch. If you’re like me, you spent most of that second half convinced the shots would eventually start falling, that a guy named Willy wouldn’t actually make big fourth quarter plays, and that Carmelo would turn to James Dolan in the middle of the action, point two fingers at his head and say “I’m waiving my no-trade clause” before walking into the tunnel at Madison Square Garden. Because absolutely zero of those things happened, and because Derrick Rose flashed back to 2011, and because Kristaps Porzingis is a terrific and terrifying 7’3” man and was the best Latvian on the floor that day, the Spurs lost.

It was a loss made worse by memories of a similar defeat in the Garden two seasons before, when the Spurs went down in overtime after being up by as many as 13 points in the second half. But though the two games feel comparable, that 2015 loss was orders of magnitude worse than Sunday. Those Spurs were in a much tighter playoff race, wherein a single loss meant the difference between the two seed and the six seed. (This years’ Spurs are currently nine games up on sixth seeded Memphis.) Also, those Knicks didn’t have Melo, Rose, or Porzingis, and rolled out on that day a starting lineup of Langston Galloway, Alexey Shved, Andrea Bargnani, Lou Amundson, and Lance Thomas. Losing to those Knicks was the equivalent of losing a chess match to a parakeet. The 2017 Knicks by comparison — while not good by any stretch of the imagination — are Garry Kasparov.

As the Spurs weathered their drought in the Big Apple, there were rain clouds gathering to the west, where the Indiana Pacers waited. Indy had followed up a seven game winning streak with a three game losing streak, and always give the Spurs their best, so a slugfest seemed likely. Throughout Monday night’s game, the Spurs, who are 9-1 on SEGABABAs this year, looked willing to be had. The desert seemed endless for everyone not named Kawhi. Aldridge clanked jumper after jumper, even throwing up an airball that led to a David Lee over-the-back foul. As Dewayne Dedmon tried to add to his 12 rebounds by jumping around Indy’s Myles Turner and Kevin Seraphin on a free throw, a thing that happens literally ten times in any given game, he was whistled for an off-the-ball foul that led to two free throws for Seraphin.

But then, finally, the rain came. Green hit a triple to cut the Pacers’ fourth quarter lead to one. Tony Parker reminded everyone he exists and Kyle Anderson provided his monthly tease. Most importantly, Aldridge stopped settling for jumpers and went to the rim, drawing an and-1 with 52 seconds left to put the Spurs up five. It was the biggest play of the game, a sunburst masquerading as a layup. It not only ensured that the Spurs would follow up a bad loss with a hard-fought victory, it enshrined them once again as the most consistent team in professional sports.

Most consistent because, with the win in Indianapolis, San Antonio has now clinched a winning season for 20 straight years. It’s a streak that’s longer than the career of Peyton Manning, spans four presidential administrations, and is old enough to vote. With the way Kawhi Leonard is throwing in 30 point performances, you get the feeling the streak could eventually be old enough to run for President.

Leonard scored 32 Monday night and once again scored a decisive victory over his spiritual nemesis, Paul George. Though George scored 27 points of his own, he battled foul trouble and played tentatively at times. Even when George came away with a defensive stop, Kawhi was right there to yank the rug out from under his feet like a low-key Michael Jordan dominating a bearded Clyde Drexler.

Loses it, gets it right back. pic.twitter.com/eIke3RQ7rC

The Spurs have the type of consistency that makes atomic clocks jealous. Those 20 winning seasons also coincide with twenty straight years of their defense holding opponents under 100 points per game. Not that you need me to tell you this, but they’re going into this years’ All-Star break first in the league in defensive efficiency.

And next time, they’ll remember to buy the Snapple without artificial sweetener. Happy Valentine’s Day, everyone.