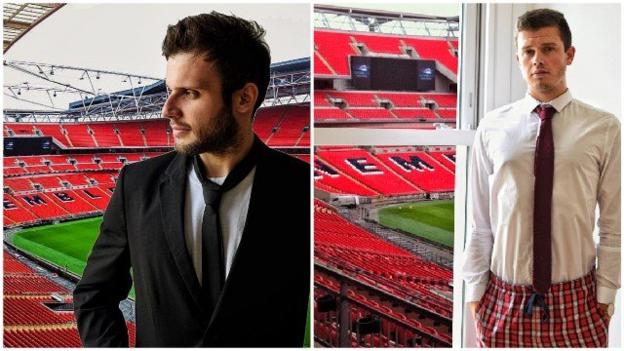 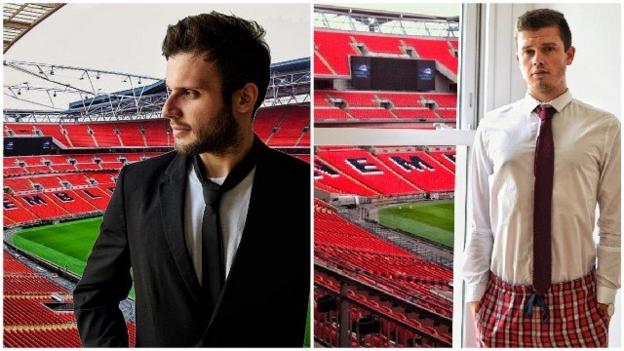 After 10 games and 1,400 miles, two friends from London had a dilemma when their quest to go to a game in every round of this season’s FA Cup was thwarted by coronavirus.

But not to be denied, they threw on a suit, flipped a toilet roll and played the conclusion out on Fifa.

Jack Dormer, 25, and Alex Rowe, 24, started their journey on 10 August at Mayfield Stadium, home of Croydon Athletic – who play in the Southern Counties East League Premier Division – where they watched a 1-0 extra preliminary round victory over Virginia Water.

The pair first got in touch with BBC Sport while attending the goalless fourth-round draw between Newcastle United and Oxford United at St James’ Park.

But Newcastle’s 3-2 win over West Bromwich Albion in the fifth round last month was to be their last. “It became clear we weren’t going to be able to complete it,” Alex told BBC Sport.

“I’m a Liverpool fan so it’s a double-whammy for me in terms of missing out on things,” he added. “We are a bit gutted having travelled this far and not being able to go to Wembley, which was the Holy Grail at the end. But we are still hopeful we will get there at some point.”

So how did they fill the void? Fifa, obviously.

“We needed some closure so we flipped a toilet roll to see who would play each team. For the first game I played as Newcastle against Manchester City. They got a shock result against City,” said Alex.

Jack added: “It was a Newcastle v Arsenal final and the Gunners clinched it at the end. As you can imagine, being a Spurs fan, that pained me a little bit. At least we got to the end though so I can’t be too upset.

“Newcastle went ahead through Jonjo Shelvey, then Mesut Ozil scored the equaliser.”

Alex joked that Jack had been “slating” Ozil before kick-off, but the midfielder also went on to set up the winning goal for Alexandre Lacazette.

“He really turned up in that game,” added Alex.

As well as swapping a coin for toilet roll, the friends dressed up in smart clothes – or, Jack did at least – to mark the final and “to show our respect to the great cup”.

“We had to share two of my ties. Alex didn’t take off his pyjama bottoms,” said Jack. “We had a few beers at the end to celebrate. Having lost to Arsenal I was in a foul mood – but that helped.”

Alex added: “We had plans to make a trophy but we’re running low on tinfoil in the flat so we’ve had to hold off on it for the moment. It wouldn’t be fair on our flatmates…”

Despite not being able to finish their FA Cup journey in real life, Jack and Alex have vowed to return to some of their favourite grounds and remain determined to reach Wembley.

“The club we fell in love with on the journey was Haringey Borough,” said Alex. “Now we’re both living in central London it won’t be that hard to get there. We’ll definitely pop over. They were great fun,”

“I wouldn’t mind another trip to Newcastle,” Jack added.