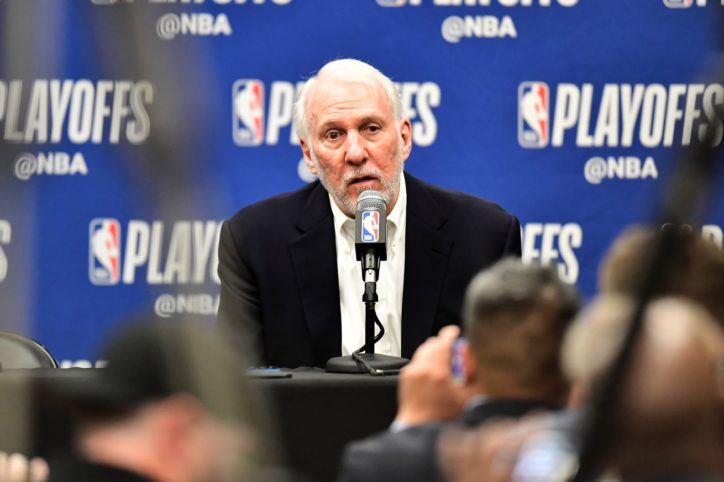 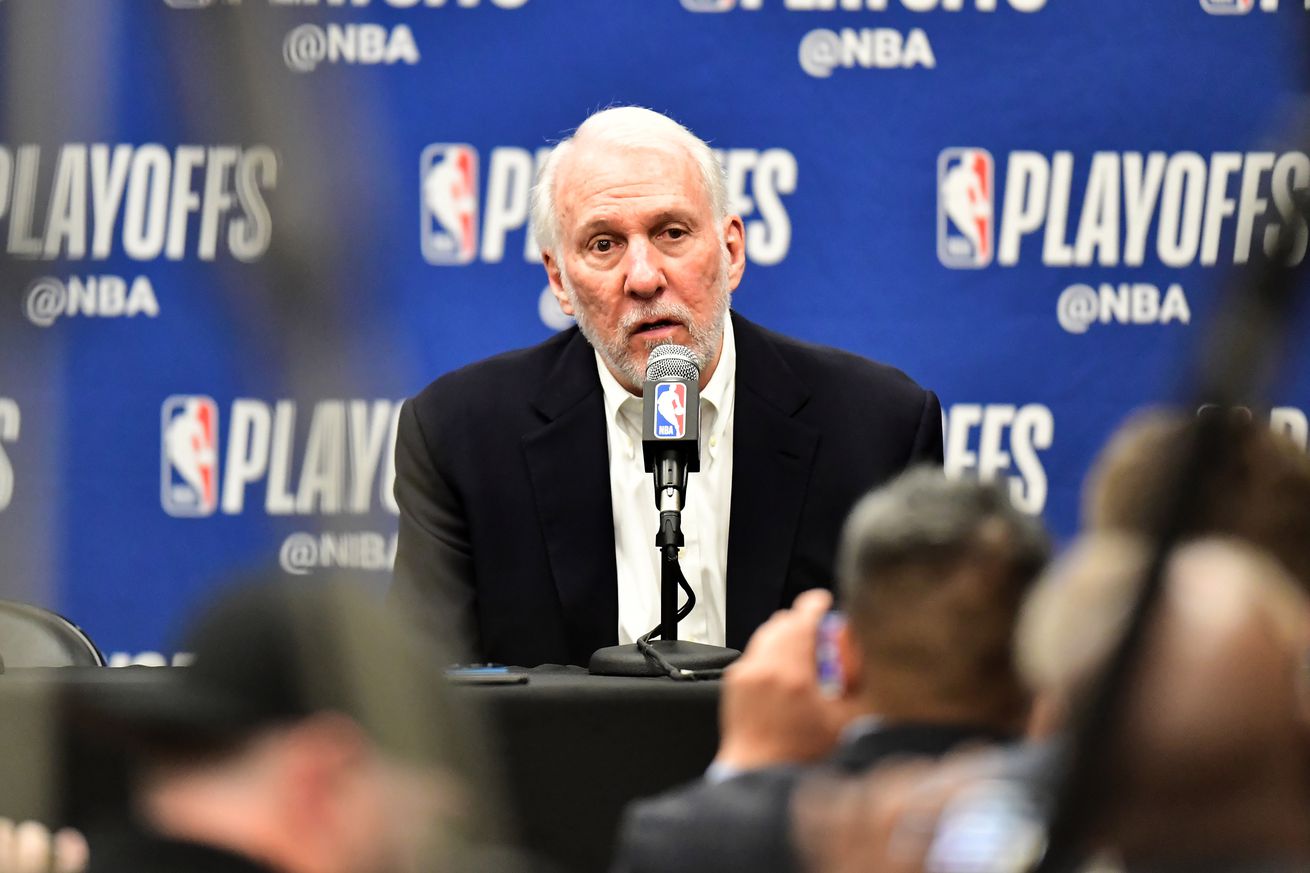 Despite a major defensive slide, anachronistic offense, and season filled with ups and downs, the Spurs have expressed an intent to build upon their new foundation.

The caveat to the Spurs’ uncharacteristically up and down 2018-19 season was that it developed more out of circumstance than by design. That’s what happens when you bid farewell to two pillars of continuity in Tony Parker and Manu Ginobili, then Kawhi Leonard, Danny Green and Kyle Anderson to offseason moves, and then lose newly anointed franchise point guard Dejounte Murray to a preseason ACL injury. For most teams, the resulting 48 wins and playoff appearance would be seen as an irrefutable success; in San Antonio, they’re expected to serve as a bridge to a return to contention.

In his end-of-season presser on Monday, Gregg Popovich briefly reconciled it all:

“I think the group did a fine job. It was strange circumstances, tough circumstances… that arose just because of the nature of the beast — a new group of players, the trade, some injuries. As we all reflect on the season, they achieved a lot more than a lot of people gave them the credit to have the opportunity to achieve. What I tell the players, I told them again today, is that I wish the season started today, with everything that we learned this last year about each other. These guys never played with each other before… it was a new system for everybody to try do that. At the same time, it’s very difficult. But they hung tough and showed a lot of character.”

It’s hard not to agree with Pop — who made do with injuries (not only Murray’s, but multiple ones to Derrick White) and loss of corporate knowledge while improving upon last season’s win total by 1, guiding his team to a near-first-round upset over the 2nd seeded Nuggets — but it’s also understandable for fans to question how much of this team’s core the team should move forward with. This summer does, after all, offer the organization a chance to do something it hasn’t been able to the past two: breathing room to assess where it’s at and change accordingly.

If Monday’s comments are any indication, those changes are likely to happen on the margins, just like this team likes it.

Anything is technically possible, but if there were hopes that this new era might signal a bit more volatility or risk-taking in how they operate, they should probably be tempered now.

“It’s not gonna be a whole lot different. Some of the bodies will be different, and people will execute better. It’s about building the culture and building upon what we did this year. It’s not about reinventing the wheel.”

The main factor in staying the course was alluded to that day and confirmed the next: Pop will be back. With him on the sidelines, the culture, direction, familiarity, and system power on, a unique advantage as the coach enters his 23rd full season.

The Spurs intend to try to retain Rudy Gay

Gay represents the biggest possible variance between this year and next year’s roster, at least as how things stand now.

“Sure,” Pop said, when asked if the team hoped to keep the 32-year-old forward who’s spent his last two seasons in San Antonio. “He just keeps getting better every year. He’s somebody we’re hoping to figure out a way to keep here.”

Gay was often last season’s big X factor, despite a move to the bench as the team went big. The fit has never seemed stylistically perfect, but his versatility on defense and willingness to morph into a floor-spacer have helped. We’ll see how much Gay agrees, and if there’s a number that both sides are willing to move forward with.

Despite technically playing the 3 in his first season in San Antonio, DeMar DeRozan was the Spurs’ primary creator on offense, averaging over 6 assists per contest and having much of the offense work through him. For that reason, the title of starting PG on the Spurs felt — and still seems — to be more technical than practical.

Still, questions around that distinction are abound. With Murray’s return, Pop will need to decide how he juggles minutes and rotations between him, DeRozan, Bryn Forbes and White — who excelled as both a nominal and legitimate 1 for the Spurs. That’s not even mentioning Lonnie Walker IV, who should spend far more time in San Antonio than Austin in 2019-20.

“Dejounte’s important, you know,” said Pop when asked about re-integrating the guard who missed this entire season. “He was an All-NBA defender. Everybody forgets that, I think. That’s where the defense begins and ends, with him, and the other point guard or two guard, because I’m sure he’ll do both.”

The last part of that quote is a little interesting, given the team had, in 2017-18, passed the point guard torch from Parker to Murray. With White’s standout play in the season and playoffs, and with the spacing issues that theoretically exist with Aldridge, Murray and DeRozan sharing the floor (especially after Poeltl’s promotion to the starting lineup), it’s understandable for Pop to be a little more open to new possibilities.

“That’s always a challenge for every coach. Minutes for players. But I’d rather have that challenge and have Dejounte back than have him gone again. Minutes aren’t a problem, really, and if we have a minutes problem, that’ll be a good one.”

Either way, the team can never have too much defensive talent, and the Spurs, especially after last season’s 20th ranked defense, will want to make an emphasis to return to the top third of the league. Murray figures to play a part in that.

Lonnie should have a bigger role in year two

Walker was mentioned alongside Murray’s name when Pop talked about the additional athleticism he was expecting to see as a part of next season’s team. Given the track record of the San Antonio developmental machine, there’s reason to be excited about what he might do. Of all three young guards, you could make the case he has the highest upside.

“You have to go with what you have, and all our players aren’t three-point shooters,” began Pop when talking about his team’s anachronistic aversion to the long ball and how that may play out next year. “You’re not gonna make them into Steph Curry just by practicing over the summer. I don’t think that’s gonna happen.”

And yet, the Spurs know better than to completely resist change, even with last season’s offense finishing ranked 7th in offensive rating. DeRozan, who attempted only 45 threes all of last season, was at the center of a question regarding the team changing with the times. Here was Pop’s answer:

“I think that that’s something that we really have to discuss and think about, because that’s what the league is all about now. You end the game and the first thing you look at is three-point shooting… it covers up a lot of warts.”

While the Spurs don’t figure to contend next season without an appreciable bump in shooting efficiency from their two stars, a return to elite defense, or a leap by one or more of their young guards, they stand to be better than this year’s 48-win squad. That’s reason enough to temper any desires for big changes and accept the stated trajectory of building on what they have. Any surprises that come should arise from within, and will hopefully be the good kind.

Expect the Spurs to refine rather than rethink this season’s squad
Source: Pounding The Rock