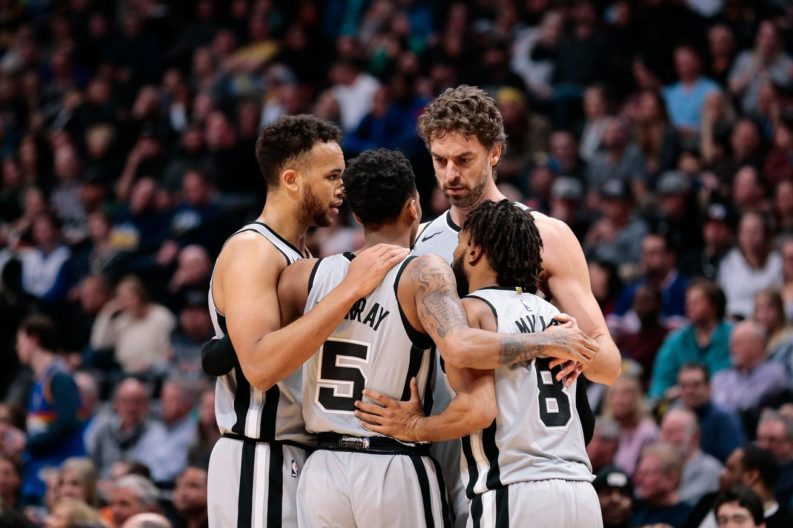 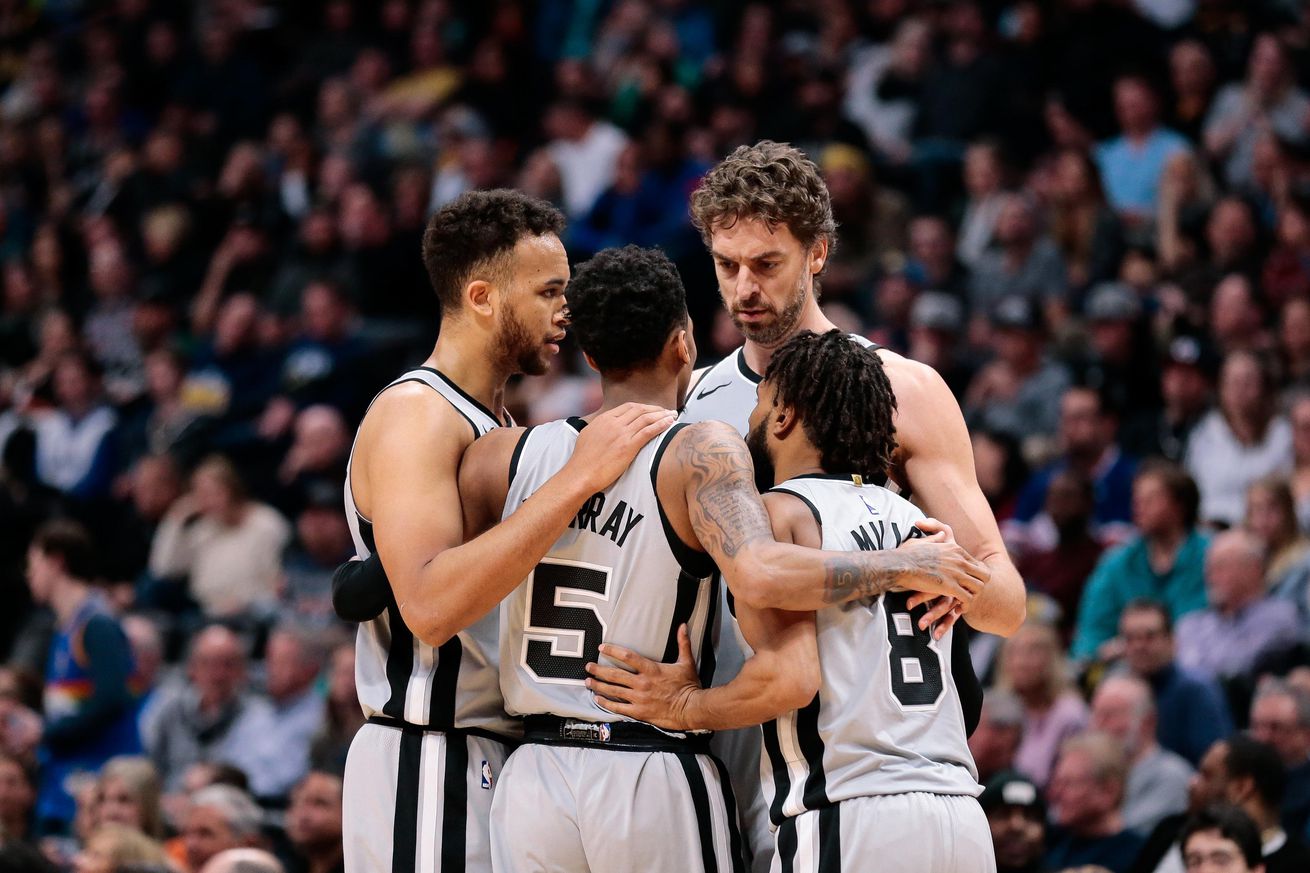 With plenty of new pieces and new roles, this year’s offense could look (and perform) very different.

This is the second post in a three-part series on how the Spurs pick-and-roll attack could evolve around their new pieces. Part 1 discussed how DeMar DeRozan could be the missing piece to the Spurs’ struggling offensive game over the last few years, and this is a look at the role the passing man plays in finding a shooter in the pick-and-roll.

One of the more common types of pick-and-roll plays the Toronto Raptors ran was the chin pick-and-roll. If everything goes to plan, I could see Dejounte Murray playing role of Kyle Lowry during these sets.

In the final play above, the defender was able to fight through the screen, but DeRozan, who was one of the most efficient isolation players in the NBA last season with 1.02 PPP (points per possession), was still able to create space for an open mid-range jumper.

Outside of Murray, the Spurs ball-handlers had relatively high shooting percentages. Unfortunately, with the exception of Bryn Forbes, they also had trouble holding onto the ball during pick-and-roll situations. For an offensively challenged team, not taking care of the ball is a death sentence. In watching Manu Ginobili, we’ve learned to take the good with the bad. Thankfully, the good has always far outweighed the bad. In this case, his ability to still get to the rim and create for others helps to overcome the high turnover rate.

Despite a huge volume of possessions, DeRozan has been excellent at keeping his turnovers down to a minimum throughout the years. Hopefully this trend continues, as it helps to offset his sometimes inefficient playing style.

Passing out of the pick-and-roll would be the area the Spurs could miss Ginobili the most, as there are not many viable options left on the Spurs roster. His court vision has certainly led to his fair share of turnovers throughout his career, but more importantly, his court vision helped spark the Spurs “beautiful game” movement of years past.

With the exception of last season, Ginobili has exxelled at getting the ball to spot-up shooters. In limited attempts the past two seasons, Forbes has also been good at finding spot-up shooters. He certainly hasn’t mastered all areas of the pick-and-roll (his finishing leaves much to be desired) but he generally keeps things simple, and that helps him get to his spots, limit turnovers, and find the open man when necessary.

Tony Parker really worked on this aspect of his game throughout his career. Even with last season’s struggles, he did an excellent job finding shooters, although the shooters didn’t male their baskets at a traditionally Spursian rate.

Finding shooters is not DeRozan’s strength, so it’ll be interesting to see whether Pop surrounds him with shooters or defenders. This iteration of the Spurs doesn’t have many players (if any) who can both defend and shoot.

In looking at these statistics, my initial gut instinct was to blame the ball-handler, so I dug a little deeper. I figured the spacing had to be off, resulting in more guarded attempts. Below were the results of my findings.

While the Spurs unguarded frequency certainly isn’t as high it was during the start of the decade, last season’s numbers were right in-line with the 2013-2014 championship season. The catch-and-shoot frequency being quite a bit down can likely be attributed to Kyle Anderson replacing Kawhi Leonard in the starting lineup. As we know all too well, Anderson regularly hesitated when facing a wide open perimeter shot and usually opted for dribbling into traffic. Then again, looking at his shooting efficiency on spot-up attempts, I absolutely see why he hesitated. Whether it’s Rudy Gay or Davis Bertans replacing Anderson in the starting lineup, we at least know there will be no hesitation in taking shots, and that’s half the battle.

Based on the offseason moves by PATFO, it seems clear the Spurs’ top priority was to get back to being a top shooting team in the NBA. Danny Green’s best shooting days seem like a thing of the past, and both Parker and Anderson are not a threat as spot-up shooters. Gasol was abysmal last season at spot-up shooting, but he was very reliable the prior three seasons. Taking into account his injured shoulder last season, I think we’ll see somewhere between the 2016-2017 and 2017-2018 versions of Gasol this season. I really hope he can get back to shooting the ball with confidence. If not, I expect Jakob Poeltl to start eating into his minutes rather early into the season.

Patty Mills is a spot-up shooting master, especially off a pass from the pick-and-roll ball-handler. He and Ginobili have been a fantastic 1-2 punch off the bench, and I hope we get to witness their chemistry on the court for at least one more season. The Spurs brought back Belinelli, who will help space the floor. Add in sharp-shooting Bertans, and the Spurs have a lot of firepower off the bench. The key to the bench’s success will be finding a ball-handler who can create for others as Mills, Belinelli, and Bertans are all far more productive off the ball. Ginobili would certainly help in this regard, but even if he returns for another season, his minutes will be limited. Derrick White has shown the ability to create his own shot out of the pick-and-roll, but I will need to see him create for others more often before I can feel comfortable with him running the show for long stretches off the bench.

Ginobili might be the best passer to the roll man in the entire NBA. He’s definitely the best in this category on the Spurs roster. If you factor in volume, you could certainly make the case for James Harden, Chris Paul, and a few others, but I would put Manu in the same tier. With the exception of Dewayne Dedmon, he has had the majority of his success without the benefit of an athletic, rim-running big. With Poeltl in San Antonio, I could see him and Ginobili causing a lot of chaos in the pick-and-roll by forcing defenses to commit to Poeltl’s rim-running ability. This should allow the shooters to find open areas on the court to knock down shots.

DeRozan had his best season in this category last year, and has shown steady improvement over the years. While it would be natural to assume this means DeRozan and Poeltl work well together, that has yet to be proven on the court. They only played 644 minutes together last season, and their net rating of 3.0 was ranked 26th out of the 30 2-man lineups for the Toronto Raptors who played at least 500 minutes together. Additionally, only eight of Poeltl’s 63 buckets as a pick-and-roll roll man came from DeRozan.

(The rankings in the above table are based on the 63 players in the NBA who recorded at least 100 possessions as the pick-and-roll roll man.)

The Spurs’ pick-and-roll attack will definitely benefit if Ginobili returns, but they also have good pieces to go alongside DeRozan’s style of attack should be be a main ball-handler.

Check back tomorrow for the final installment of this series, where we will delve deeper into the role of the man on receiving end of the pick-and-roll.