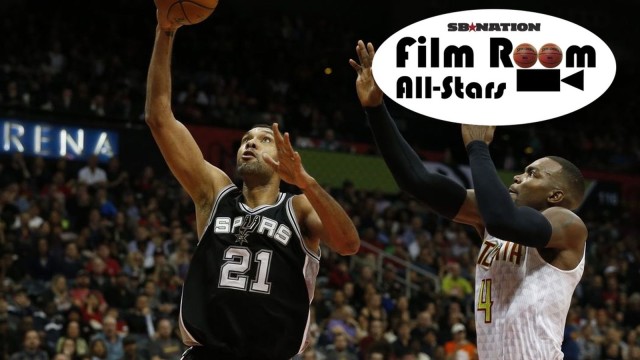 At this point, Tim Duncan gets by on muscle memory alone. He’s no longer a dynamic low-post scorer, his scoring efficiency is down, he’s snaring fewer rebounds and he’s a liability when defending in space. These things happen to big men 10 years Duncan’s junior, much less those pushing 40. The Spurs are Kawhi Leonard and LaMarcus Aldridge’s team now.

Muscle memory alone, though, still goes a long way. With Duncan, the Spurs are a historic team. Without him, they’re very good, yet vulnerable in the wrong matchup. It says a lot about Duncan’s disposition that he’s still this essential to the Spurs long after his athleticism and production have waned.

The last several weeks prove Duncan’s importance. With Duncan healthy and playing his supplementary role, the Spurs started 36-6 and were on pace for the best point differential of all time, a full two points more per 100 possessions than the Warriors’. Life was even better in the minutes Duncan played: San Antonio outscored opponents by 17 points per 100 possessions, and no other key rotation player impacted the Spurs’ historically great defense as much.

But in the 10 games since Duncan suffered a knee injury (he returned Wednesday against Orlando), the Spurs have only been very good. They were soundly defeated in both tests against elite opposition (Warriors, Cavaliers) and their point differential is nearly seven points worse than the Warriors’ over that same time frame…….Read More

Source: Even at age 39, Tim Duncan is still the Spurs’ backbone – SBNation.com