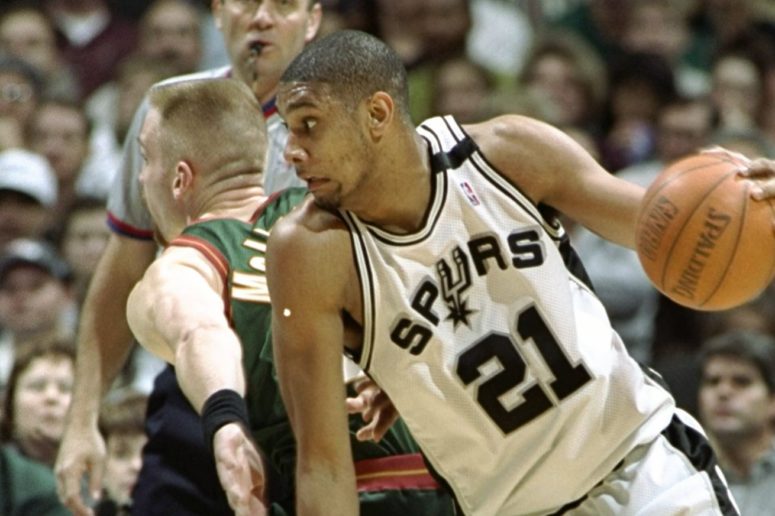 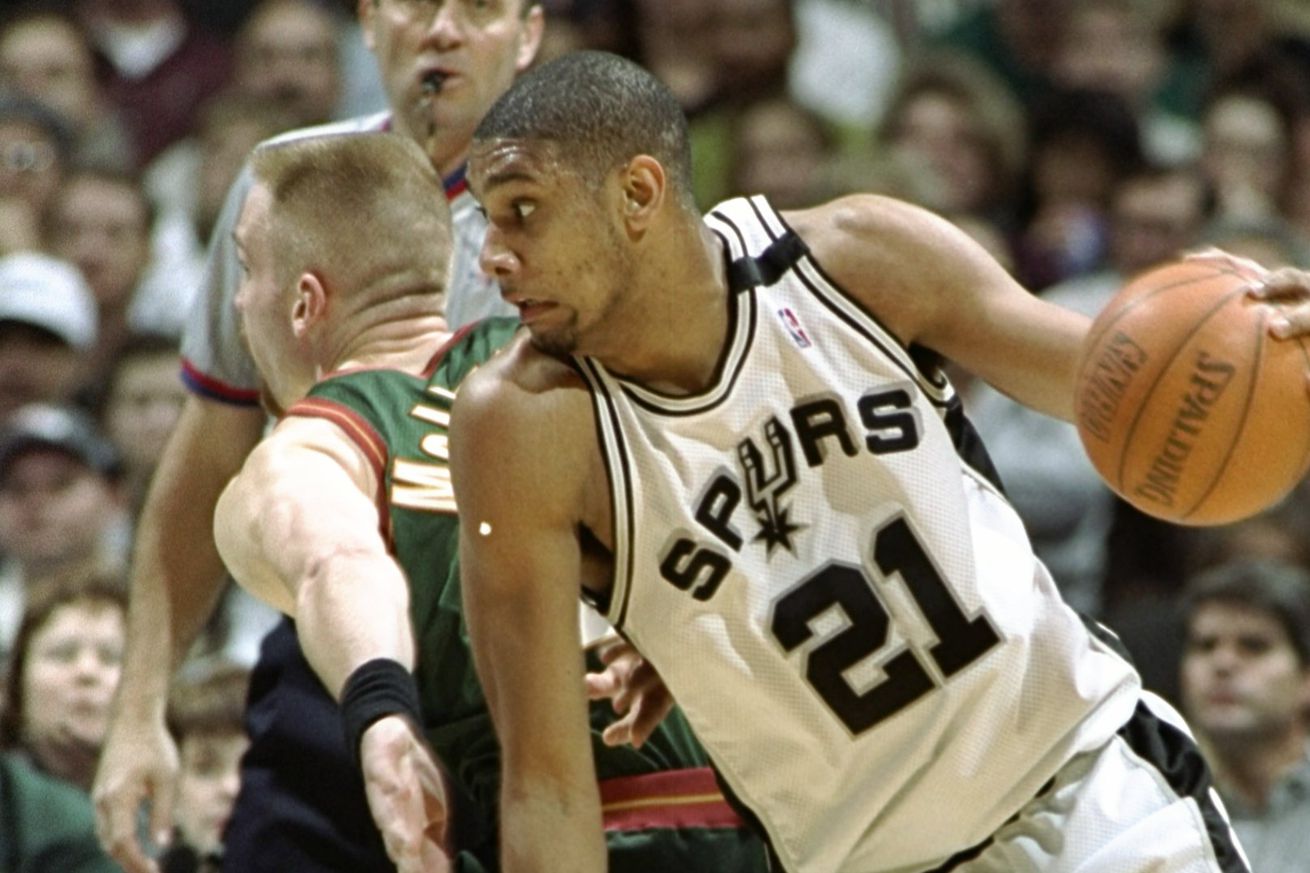 The first part of a series examining each phase of Big Fun’s career.

Amble down YouTube’s rabbit hole of late 90s NBA footage and you’re sure to stumble across a fun surprise or two. It’s as much about re-discovering those players you once had an irrational fandom for (shoutout to Antonio Daniels) and seeing all the future coaches still in Spurs jerseys as it is about appreciating the opulent harmonies of John Tesh’s Roundball Rock, the familiar timbre of Bob Costas’ voice and, if you keep auto-playing long enough, the occasional Russian broadcaster intermittently clearing his throat directly into his mic.

And then you find, amid the grainy nostalgia, a young Tim Duncan, looking like someone in a faded photo you think know—only the clothes and people around them are too outdated, the court too bedecked with pink, orange and teal, for it to actually be them. Except it is Duncan, with his usual three-quarters speed and the same nonplussed expression on his face, scoring on the likes of Elden Campbell and Greg Foster.

It’s worth taking in Duncan’s first-ever playoff game, if only to listen to announcer Kevin Harlan’s gravelly enthusiasm build, possession by possession, as Big Fun scores 28 of his 32 points the second half, cuing the first of many Spurs postseason comebacks. Duncan coming up big in the playoffs is now commonplace to us, but there’s something special about an announcer experiencing the full display for the first time and articulating it as Harlan does.

“Time after time, winning joust after joust, he cannot be stopped!”

“This is a rookie, single-handedly, taking over the game.”

“Foul on McDyess! What else is he gonna do? Put up a roadblock!”

(At some point in the fourth quarter, an inspired Harlan also waxes poetically about the Suns’ Jason Kidd: “Those piercing green eyes, searching like drill-bits, trying to bore their way into San Antonio’s defense.”)

These were the sounds of a league coming to grips with a transcendent talent who came straight out of the box, ready to dominate. In year one, Duncan was voted to All-NBA First Team, gaining top-dog status on a perennial playoff team that already boasted a future Hall of Famer, in his prime, in David Robinson.

And though he was almost immediately considered the superior player, Duncan benefited greatly from playing alongside the Admiral, sharing the defensive workload and, very likely, focusing more on developing as a player and less on assuming leadership duties. Duncan became only the third player to sweep Rookie of the Month honors through the entire season, and the numbers he and Robinson combined for in 1997-98 still jump off the page, especially when you consider the team’s 88-possession pace: 42.7 points, 22.5 rebounds and 5.1 blocks per game.

Those first three seasons provided the ideal buffer for Duncan to come into his own, and for Gregg Popovich to adjust to his new superstar. While Robinson remained a Spur beyond the spring of 2000, the decline in his game, and Duncan’s rise as the sole primary option, made for a logical transition from the first Duncanian Age, bookended by a knee injury that not only ended his season but may have impacted how he fashioned his game in the years to come.

Early Duncan was a patchwork of elite skills in a young man’s body. But more than possessing these raw, individual traits—size, strength, touch, IQ and ball-handling—was how, even as a 22-year-old, he knew how to use one to leverage the other, like a Rube Goldberg basketball machine.

He could already pick-and-pop comfortably from 18 feet, and defenders wary of his range would often dare him to put the ball on the floor. An easy finish at the rim was often just a pump fake or jab step away.

If he was still met with contact around the basket, Duncan had the strength and touch to finish through it.

Already back then, the word “fundamentals” followed him around like a shadow, the first descriptor on most broadcasters’ lips when they tried to summarize his all-around style of play. Angles, footwork, balance, and a hard-headed center of gravity meant his offensive game remained forever restrained—borderline minimalist. There was rarely a need to barrel into the lane or fully extend himself mid-air—a head fake, shimmy or ball show was often enough to get a defender off balance, creating enough space for him to go to work.

Yet, while his game never leaned on pure athleticism, you can go back to these grainy old clips and see the extra step that abandoned him somewhere along the way.

Duncan actually posted his best-ever field-goal percentage (55%) in his rookie season, benefiting in many ways from sharing the floor with another seven-footer who could play either facing the basket or with his back to it. Most opponents had, at best, one good post defender, and were usually forced to pick their poison between San Antonio’s two All-Stars.

When he wasn’t scoring from mid-range, Robinson’s preference as a lefty was the right block, where he could turn over his right shoulder and finish with his dominant hand. Duncan, meanwhile, was more versatile, and was comfortable scoring from all over. If teams put a slower center on him, he had the speed and footwork to take them off the dribble; if he had a traditional power forward on his back, he was usually too big and strong to be contained. Most of the time, though, it didn’t matter—he was going to get his shot one way or another. And the bank was always open.

Double-teams became the early answer to slowing Duncan down, especially in fourth quarters when opponents would force guys like Avery Johnson and Sean Elliott to knock down shots. And though he was a strong passer already, Duncan’s handling of that pressure definitely improved over time. He posted his highest turnover numbers (3.4 per game) in his rookie season, and some of those came from not properly anticipating the help defender to make the right pass.

Duncan and Robinson could be positioned on opposite sides of the paint. If teams denied one player the entry pass or quickly double-teamed the strong-side post, the ball could be quickly swung around to the other, or they could free each other up with a timely cross-screen. There was plenty of high-low action, as well, with Pop taking advantage of two sweet-passing big men.

Defensively, the two became the perfect backline of a team that ranked first, second and first in defensive rating between 1997-98 and 1999-2000. Duncan could patrol the paint or defend more perimeter-oriented bigs. Often it was the latter, with Robinson taking on the Shaqs and Hakeems, and Duncan assigned to the Horrys, Rasheed Wallaces and, in the 1999 Finals, Larry Johnson — but both players had the mobility and length to provide help D when needed.

And when possessions swung, the younger Duncan was usually the first big man down the floor, especially off rebounds or turnovers. Sometimes it was just a matter of him racing to the other end, establishing position in the post, and scoring. Other times he ran like a wing, catching and scoring with ease in the open floor.

But far more common were the buckets he got in the half-court, plays he could often win before even catching the ball.

The economy of Duncan’s game — a pillar of the Spurs’ trademark “strategic laziness” — was already visible in the Twin Towers Age. His innate feel meant that he was precisely where he needed to be, rarely doing more than necessary. This isn’t to say he lacked effort, but it was almost always held in check. Sprints, jumps, spins—all done with a concerted purpose.

Did such minimalism contribute to a clean bill of health through the last week of his 1999-2000 season? It couldn’t have hurt. But in overtime of an April matchup versus Sacramento, Duncan (who’d made just 5 of 21 shots from the field that night) felt compelled to dunk on Scot Pollard. It was a play that looked patently different from his usual moves, as he finished across his body at the expense of having his feet set for a landing. As a result (and potentially with the assist from the occasionally chippy Pollard), he came down awkwardly and tore the lateral meniscus in his left knee.

Pop shut Duncan down for the season and playoffs, where the second-seeded Spurs got bounced in four games by the Suns. They would, of course, be back, and the cautionary move may have played a big role in their dominance in the years to come. As a result, few people dwell on the ‘what if’ of the injury and whether the Spurs could’ve defended their 1999 title. For the purposes of this series, though, we’ll keep an eye on the toll it took on Duncan’s knee, both immediately and over time.