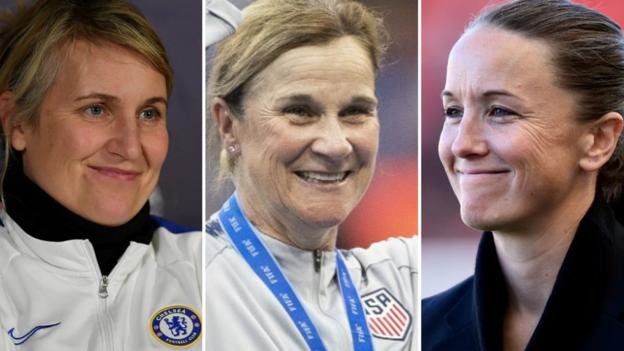 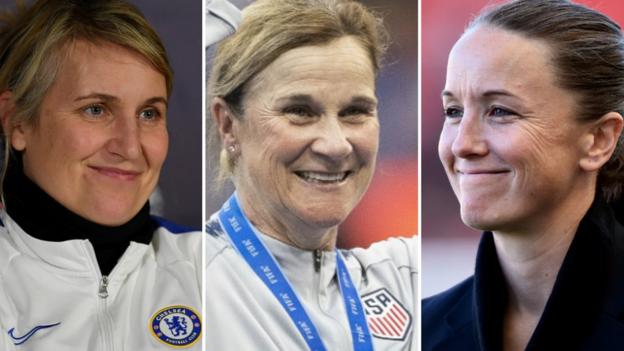 With England having reached the semi-finals of three consecutive major tournaments, the news that Phil Neville will leave his role as the Lionesses’ head coach in 2021 has opened a vacancy in one of the most sought-after positions in the global women’s game.

His successor will have the rare privilege of leading the team into a European Championship on home soil, and could even oversee five major tournaments in the space of five summers.

With the rearranged Olympic Games of 2021 set to be followed by the Euros in 2022, a World Cup in 2023, the Paris 2024 Olympics and then the 2025 Euros, and with many of the senior England squad approaching the peaks of their careers, there has arguably never been a better time to manage the national team.

Neville’s appointment in 2018 came as something of a surprise, but this time who are the main runners and riders to succeed him and, crucially, try to steer England to a first major trophy?

Here, in alphabetical order, are some of the leading contenders.

One of the standout WSL club coaches of the modern era, in terms of silverware won, is former Manchester City boss Nick Cushing.

The 35-year-old lifted six major trophies in six years with City before stepping down from his role in February, and during that time he worked with enough of the current England squad to fill an entire starting XI and most of the bench.

He named nine English players in his entirely British starting XI on the day City clinched their first league title in 2016 and has a strong relationship with senior Lionesses, including captain Steph Houghton, midfielder Jill Scott and striker Ellen White.

Yet, having only recently moved to New York with his young family to take the role of assistant coach at New York City men’s team in the MLS, the timing is not ideal.

And the Football Association will not have forgotten that the last time it was recruiting for a new Lionesses boss after Mark Sampson’s sacking in 2017, Cushing withdrew himself from the process and instead signed a new contract with Man City.

It is also understood that, ideally, the FA would like to recruit a woman this time around.

Having overseen the United States’ back-to-back World Cup triumphs in 2015 and 2019, Jill Ellis has a proven track record of succeeding at the highest international level and recruiting her would be a clear statement of ambitious intent from the FA.

After growing up near Portsmouth, the Manchester United-supporting 53-year-old has lived in the USA since the 1980s and it is not yet clear whether she would be open to moving back across the Atlantic to take the England role.

However, such a move would offer the chance for a quick reunion with one of her key allies from the USA camp, with the Lionesses having recently recruited Dawn Scott as physical performance manager, after she attracted widespread acclaim for her work in a similar role working under Ellis for the world champions.

It is believed though there are some reservations about Ellis within the FA, with some feeling that her World Cup successes have been predominantly down to the USA having the best squad of players in the world.

Another widely respected coach with the pedigree to take up the vacancy is former Arsenal boss Laura Harvey, who has previously worked with England as an assistant coach through the age-group teams, building bonds with many of the current senior side.

However, once again the timing of the news about Neville’s future might be at odds with her plans, with Warwickshire-born Harvey only having taken up the role of under-20 head coach of the USA in January.

Meanwhile, there are a host of other English coaches working in the American NWSL, including Orlando Pride’s former Birmingham City boss Marc Skinner and Portland Thorns’ former Chelsea boss Mark Parsons, who may well be among those considered by the FA, but they would not offer the kind of ‘big-name’ aura that the Lionesses might be looking for.

Respected by players all around the world, Emma Hayes has drawn widespread praise for her management of Chelsea, who had the destiny of the Women’s Super League title in their hands before football’s suspension on 13 March.

With a reputation for tactical prowess, getting the best out of her players and being comfortable in the media spotlight, Hayes has the attributes to thrive in the role.

Nevertheless, she is passionately determined to win the Champions League with Chelsea and topple European women’s football’s dominant force, Lyon, so has unfinished business in west London.

The earliest her side could claim the European crown would be at the end of next season, with qualification not yet guaranteed, so the England vacancy may have come too soon for Hayes this time around.

Hayes is also known for speaking her mind and has been an outspoken critic of the FA in the past, so may have reservations about potentially being shackled by the top job.

If the FA was determined to appoint somebody from within the biggest league they run – the English WSL – they may well look to Arsenal manager Joe Montemurro, who guided the Gunners to their first league title in seven years last season.

The 50-year-old Australian, who is a lifelong Arsenal fan, is popular with his squad, which includes England stars Jordan Nobbs, Leah Williamson and Beth Mead.

However, he has been linked with the national team job in his home country and the future of the Matildas’ current boss – Ante Milicic – is not entirely clear, with Milicic having initially only been appointed on an interim basis for 2019’s World Cup.

Elsewhere in the WSL, Everton boss Willie Kirk and Reading’s Kelly Chambers have both enjoyed strong seasons, but the vast majority of the England squad currently play for the top three sides, Man City, Arsenal and Chelsea, giving them perhaps at best only an outside chance in the running.

Despite this relatively long list of strong contenders, it is worth remembering that, when the FA was last searching for a Lionesses boss in the winter of 2017-18, many of their preferred candidates pulled out of the running, and Neville’s appointment came out of the blue.

So it may be that the association’s net is cast even wider this time and that may prompt them to approach some of the best-rated overseas coaches.

Should that be the case, former Germany boss Silvia Neid arguably has the strongest CV of any out-of-contract European boss.

In an 11-year spell as Germany boss, the 55-year-old won the 2007 World Cup as well as an Olympic gold and two European Championships, with a side that frequently enjoyed victories over England.

Elsewhere, Sarina Wiegman is in credit after guiding the Netherlands to 2017’s European title and then 2019’s World Cup final, but England may prefer to look for a coach who is not currently employed by another association.

Should the FA decide to look to promote somebody from within the existing Lionesses setup, Phil Neville’s number two Bev Priestman would seem best placed.

Relatively unknown outside of the inner circles of the women’s game before her appointment as Neville’s right-hand woman in August 2018, the County Durham-born coach has been at the forefront of the England backroom team along with Welsh coach Geraint Twose and goalkeeping coach Mark Mason.

Priestman was installed as the bookies’ early favourite to succeed Neville on Thursday, ahead of Ellis.

That came after reports that Neville might have a role in deciding who replaces him.

That said, despite her experience in previous technical roles in New Zealand and Canada’s national setups, Priestman would never previously have been put under the spotlight in the way an England boss is.

Another frontrunner will be Manchester United head coach Casey Stoney, with many commentators having long believed the former England captain will one day become the Lionesses boss.

Stoney, 37, has the respect of the current squad, having been a senior member of the team while many of them were breaking into the side, and is working with some of the country’s brightest young talents at United.

She has impressed as a leader in her first two years as a coach since ending her playing career in 2018, but many will question whether she has enough managerial experience to take the top job yet.

Given that Neville’s departure will not be finalised until the summer of 2021, that may give an opportunity for Stoney to gain a further year’s knowhow as a number one before taking the step up to the national team, but equally she may feel she wants to take her fledgling Red Devils side further first before moving on.