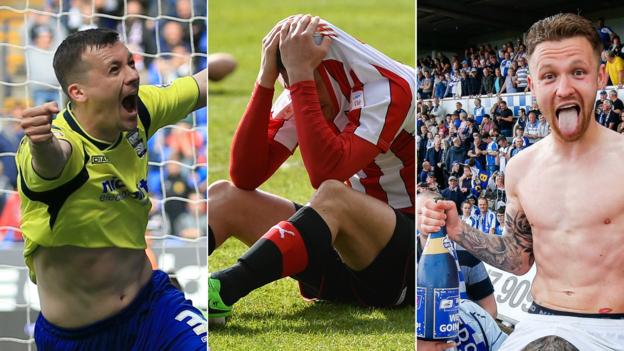 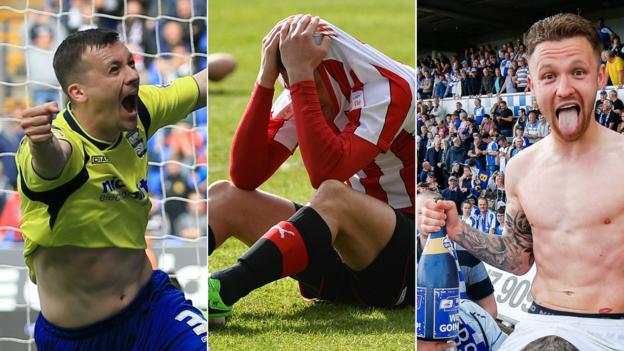 Saturday was supposed to mark the end of the Championship’s regular season.

Would Leeds end their 16-year Premier League exile? Would West Brom return to the top flight? Which teams would fall in the eight-way survival scrap?

Those questions remain unanswered, with professional football on hold indefinitely because of coronavirus.

To help fill the void BBC Sport have compiled a selection (in no particular order) of the English Football League’s most memorable final days – featuring winner-takes-all showdowns and the keeper who scored that goal.

Join us on Saturday from 12:00 BST as we ask you for your favourite final-day memories to coincide with when the last round of Championship games this season should have been played.

For the neutral observer, the final day of the 2012-13 Championship was about as thrilling as it gets, with promotion, play-off race and relegation fight all going to the wire.

There always have to be losers, but none more unfortunate than Peterborough United.

Darren Ferguson’s side went into their season-ender at Crystal Palace above the bottom three on goal difference after a run of just one defeat in 12.

Posh led into the final 10 minutes at Selhurst Park but Mile Jedinak’s 89th-minute goal – in off his shoulder – saw them lose 3-2 and go down despite having 54 points, the highest by a relegated team in Championship history.

“We were growing. We would have been top 12 the next season. It would’ve been Bournemouth-like stuff. We could have sold players for £10-12m. It would have changed everything.”

In the race for the second automatic promotion spot, Hull limped over the line with a draw against champions Cardiff, with Watford beaten by Leeds when victory would have seen the Hornets go up.

But we know how that particular story ended.

With the aggregate score level in stoppage time in their play-off semi-final against Watford, French winger Knockaert missed a 97th-minute penalty – with the Hornets going straight down the other end to score an extraordinary winner.

‘Football rewarded me with a moment’

It simply does not get any better than the last day of the 1998-99 Third Division – unless you were a Scarborough fan.

Carlisle were staring down the barrel of losing their 71-year Football League status as they entered the final minute of their game with Plymouth, which they had to win to have any hope of survival.

Up trotted on-loan Swindon keeper Jimmy Glass for a corner and the ball fell for him to half-volley in arguably the most memorable goal in EFL history, saving the Cumbrians from non-league football.

“I was always a frustrated forward and I probably enjoyed playing up front more than in goal,” Glass, now 46, told BBC Sport.

“I did love football and in the end it rewarded me with a moment.”

After a pitch invasion left him with a nosebleed, mass media interest followed in the pre-social media era.

But less than two years later, Glass retired from the game, aged just 27, and wondering whether his Roy of the Rovers goal had actually done him more harm than good.

“At the time it was fantastic but arguably it didn’t help my career, it actually maybe hindered it.

“For a long time I fell out of love with football. Some days I’d flick the goal video on and it would make me feel good and other times I didn’t really want to hear about it.”

Glass worked as a taxi driver and ran his own firm, but also struggled with mental health problems in the form of a gambling addiction.

He returned to football in 2016, using his experiences in and out of the game as a player liaison officer at Premier League side Bournemouth.

Asked whether he would have benefitted had such a role existed during his time in the spotlight, Glass said: “It was a very different time and had I had someone to support me and help me understand what was going on then definitely, it could’ve gone better for me.”

League One’s automatic promotion race went right to the wire this season, and threw up a dramatic finale which will take some topping.

Doncaster Rovers went into the final game second in the table, needing a draw to be certain of a place in the top two. Brentford were two points behind Donny in third, and knew only a win could see them pip the South Yorkshire side to promotion.

Rovers went to west London to defend, and largely frustrated the Bees – who hit the woodwork in the first half through Bradley Wright-Phillips.

With the game still goalless as the injury time board went up in the 90th minute, it looked like Brentford’s efforts to score would be in vain. But then Dean Furman brought down Toumani Diagouraga in the Doncaster box, and the hosts were given a 94th-minute penalty.

On loan striker Marcello Trotta stepped up to take the spot-kick, brushing aside captain and regular taker Kevin O’Connor, aiming to clinch a place in the Championship for the Bees.

But the Italian smashed his effort against the underside of the bar and Doncaster then broke away on the counter-attack through Billy Paynter. With just the keeper to beat, he squared the ball to James Coppinger for a tap-in. Just 18 seconds had elapsed since Trotta’s penalty miss.

Cue bedlam among the travelling fans, including flares being lit, as the long-serving midfielder’s goal gave Doncaster the League One title as well because Bournemouth had drawn at Tranmere on the final day.

Brentford were consigned to the play-offs and made it to the Wembley final, where they were beaten by Yeovil. However, the Bees did seal automatic promotion the following season and have been in the Championship ever since.

Brighton may now be a Premier League club, but 23 years ago the Seagulls were fighting for their very survival.

Fans spent most of the campaign protesting against the ownership of Bill Archer, who had sold the club’s Goldstone Ground for redevelopment, and the side was cut adrift at the foot of Division Three.

In December, the Sussex club were 11 points from safety, having had two points deducted for failing to control their spectators, but clawed their way back into contention to have a chance of survival on the final day.

A 1-0 win over Doncaster on the penultimate weekend, in the last ever game at the Goldstone, meant Brighton went into the final day ahead of Hereford United on goals scored.

Appropriately, The final fixture of the campaign was a scrap between the bottom two at Edgar Street.

An own goal by Albion left-back Kerry Mayo midway through the first half put Hereford ahead, but Robbie Reinelt equalised 17 minutes into the second half, and Brighton hung on for the point which preserved their fourth-tier status.

Hereford became the first club to be relegated to non-league in four years, and it took the Bulls until 2006 to get back to the Football League. The club eventually folded in 2014-15 after dropping back into non-league two years previously.

Crystal Palace, Huddersfield Town and Portsmouth were involved in a three-way fight to avoid the drop from the second tier in the spring of 2001.

Pompey went into the final day in the relegation zone, below Palace on goal difference, having suffered a 4-2 home defeat at the hands of the Eagles four days previously. Both clubs were two points adrift of Huddersfield.

Pompey took the lead inside the first 20 minutes at Fratton Park, setting them on the way to a 3-0 win. And when Huddersfield fell behind against the Blues, the south coast club were en route to survival. The same could not be said of Palace, who were still level at 0-0 at Stockport.

The Terriers then levelled just before the break, putting them three points ahead of Palace and with a better goal difference. But Lou Macari’s side immediately conceded before the half-time whistle sounded.

Huddersfield searched in vain for an equaliser in the second 45 minutes, but were set to stay up as long as Palace did not win.

But a brilliant individual goal from Dougie Freedman with three minutes remaining at Edgeley Park gave the Eagles all three points, meaning the south Londoners and Pompey stayed up by a point at the expense of Huddersfield.

Birmingham City have a habit of leaving things until the 11th hour – securing their Championship survival on the final day of both the 2016-17 and 2017-18 campaigns.

Needing to better Doncaster’s result to save themselves from the drop, Blues trailed 2-0 at Bolton with 12 minutes left, while Rovers were a goal behind at champions Leicester.

Caddis – now at Swindon – said his big moment was all a blur, and told Scottish football podcast Open Goal in October that the goal “probably shouldn’t have stood” because of a ‘foul’ by Jonathan Spector in the build-up.

Those in favour of last-minute drama are glad it did.