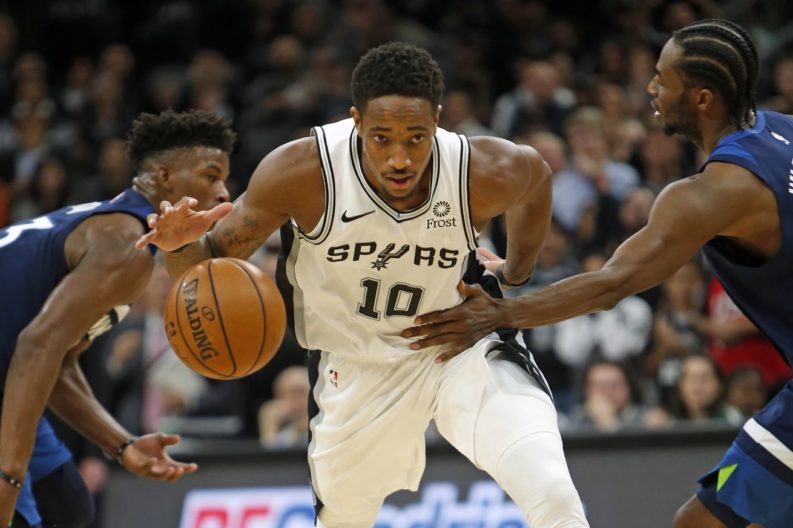 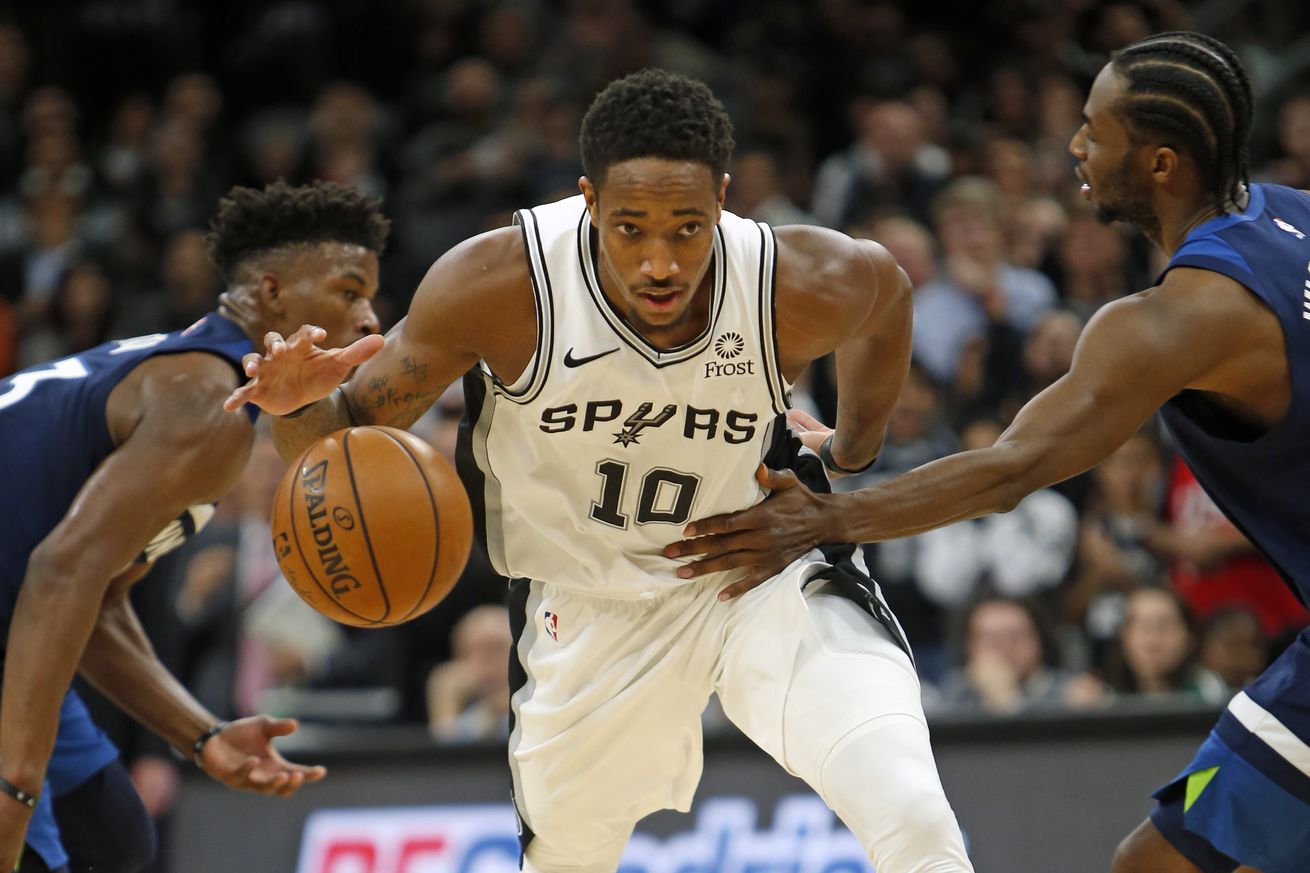 With San Antonio short handed from a troika of preseason injuries, DeRozan’s assists are making the game easy for his teammates.

Saturday’s game against the Trailblazers didn’t go well, but amid the defensive breakdowns and offensive struggles, Demar DeRozan provided some highlight reel passing to keep the team afloat.

Not much good for the @Spurs to take out of yesterday’s loss, but DeMar DeRozan’s vision and playmaking was on full display. #GoSpursGo pic.twitter.com/J7jBAxONQk

His ability to compromise a defense, make the right read, and deliver an on-time and on-target pass is critical to a Spurs offense that has, so far, been 7 points per 100 possessions better than last year. Just as important, he rarely turns the ball over on either his drives or passes, which is the main reason the Spurs currently lead the league in AST/TO ratio.

Looking at a few of his passes and assists from this game, it’s obvious how much value he brings on the offensive end.

LaMarcus Aldridge is set up on the left wing just below the three point line ready to set a screen towards the center of the floor. Just as Damian Lillard hops forward to deny the screen and force DeMar towards the baseline, DeMar begins his drive that direction. His timing takes Lillard out of the play immediately, and leaves him with just Al-Farouq Aminu to beat. He eurosteps around Aminu and has two good options immediately available to him.

The play is a typical Hammer set, run by just about every team in the league now. Once Jusuf Nurkic leaves Jakob Poeltl to help on DeMar’s drive, Jakob sets a back screen on the defender responsible for Rudy Gay in the corner, Jake Layman. This is where DeMar is supposed to go with the ball, but something interesting happened while DeMar was driving.

Lillard never really recovered out to LaMarcus, and C.J. McCollum must have thought he saw an opportunity to jump the pass, because neither of them are in good position. Rather than elevate to try to sneak the ball past Nurkic out to Gay, DeMar makes the much simpler play to get it to one of the team’s best shooters wide open on the wing. Whether intentional or not, though I’d like to believe it is, DeMar’s pass pulls Bryn Forbes just a little farther away from the close out and right into his shooting motion.

Early in the second quarter, on another foray to the basket, he dropped a slick bounce pass to LaMarcus for an open layup.

After beating Sauce Castillo baseline, DeMar sees that Meyers Leonard has both over-committed to stopping his drive and left a tiny window to get the ball to Lamarcus. The impressive part is the delivery. Rather than attempt to tap the ball over to him in the air, DeMar stops the rebound of his dribble low and snaps a one-handed bounce pass under the out-stretched arm of Leonard. The ball has a little too much heat on it though, and ricochets off LaMarcus’ thighs. Fortunately, the ball pops pretty much straight up in the air, and LaMarcus grabs it and spins directly into a wide open layup.

Then, midway through the third, he hit Rudy with this one.

DeMar is far more open than he has any business being as he comes around a pretty weak screen from Pau Gasol. That may have something to do with the score at the time, but he’s still faced with multiple defenders and multiple options for what to do with the ball. He takes one dribble and elevates towards the left side of the rim. Nurkic, Aminu, and Layman all converge on him, leaving Pau open on the right side, LaMarcus open under the basket, and Rudy open in the left corner. LaMarcus gives Aminu a little help staying out of DeMar’s way, then slides towards the opposite side of the rim. With Nurkic lurking, though, kicking the ball out is the better option. Pau may be more open, but Rudy’s definitely the right answer in this case.

DeMar consistently makes the right decision with the ball. Combined with his natural scoring ability, his vision and passing have been critical to the team’s ability to score. Per PBP Stats, the team’s offensive rating drops from 123.4 points per 100 possessions with DeMar on the court to 95.8 when he’s off. Much of that is because the team gets better shots with him on the court. The team’s shot quality, a PBP Stats estimate of the expected eFG% of a team’s shot attempts, drops by 2.5% when DeMar sits. That’s the highest on the team by far.

He’s not the second coming of Manu, and there are a lot of players who can make these passes. But not many can do it with as little risk of turnovers as DeMar, and even fewer can do so while keeping scoring as much as he does. It’s still early in the season, and the team should have another playmaker in Derrick White returning in the near future, so those numbers may not hold. Still, for now, he’s the most important player on that end of the court, and it’s not particularly close.