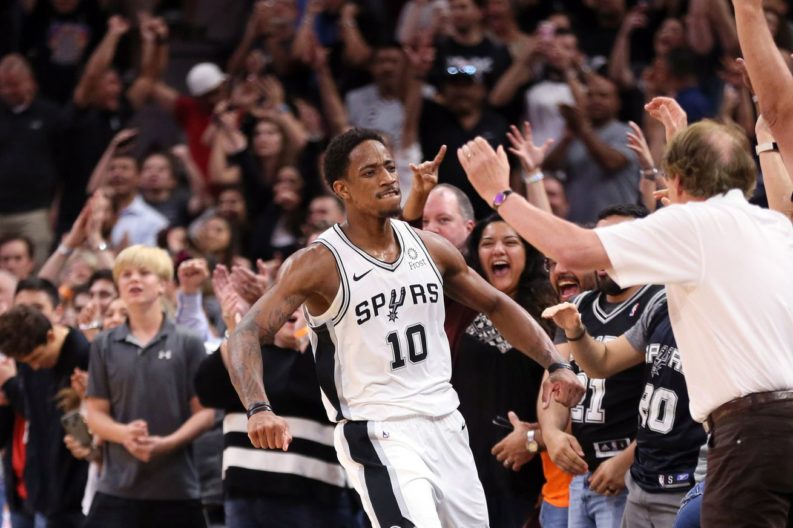 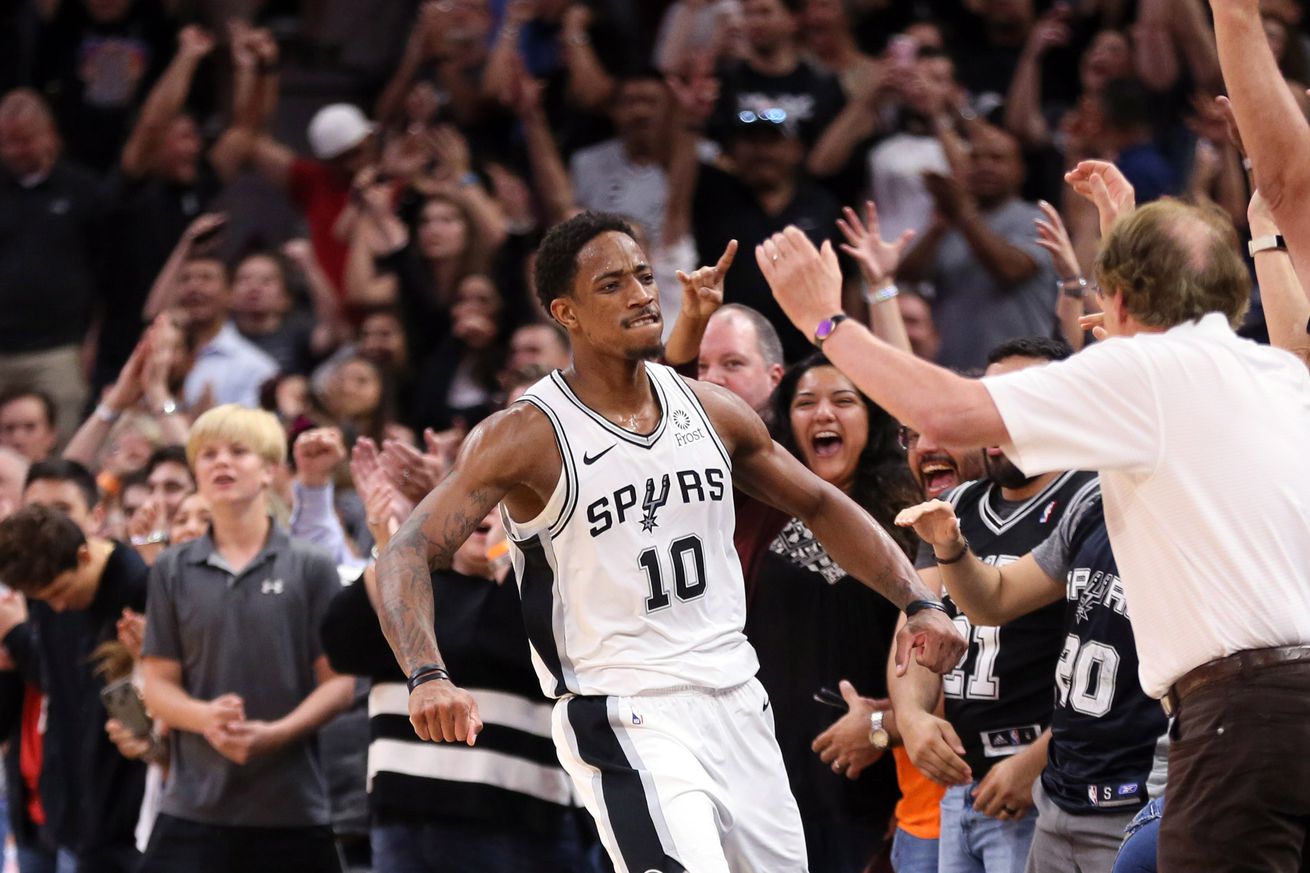 DeMar DeRozan is off to a great start in what looks to be a career year. While learning a new team and a new system, he’s somehow averaging career highs in just about every statistical category through the first 10 games of the season. How exceptional has his performance been? Well, I’m glad you asked.

Only 9 players have gotten to DeMar’s base averages (26p/6a/6r) for a whole season in NBA history. That kind of production in and of itself is a rarity, but one of DeMar’s most valuable attributes is his low turnover rate, at just 9.5%. The only player to ever hit those #s over a whole season with a turnover rate below 10% is Michael Jordan in 1989-90 and 1991-92. Actually, even if you ignore the rebounds, it’s still just Michael in those two seasons.

Aside from the volume of production, the sheer weight of the load DeMar is carrying is impressive, too. Only 22 guards have ever finished a season with a usage rate above 29 in more than 36 minutes/game and, FYI, Demar’s the only one doing it this year.

That he’s doing all this with what many consider to be an outdated approach is that much more impressive. DeMar’s throwback game has some interesting parallels. The last guard to average more than 25 point per game on 57% true shooting while hitting less than 30% from three was Dwyane Wade in 2005-06. Before that? Michael Jordan in 1991-92.

But is it sustainable?

Much of the conversation about DeMar’s performance revolves around that approach, specifically his shot selection, and that makes sense. Per Cleaning the Glass (CTG), he’s one of only three players who’ve taken more than 60% of their shots outside 4 feet and inside the 3-point line. That he’s increased his point production, while simultaneously drawing fewer free throws, is largely attributable to shooting career best percentages on those shots.

Per CTG, he’s hit 48% of his long midrange shots so far this year after averaging just under 41% over the last two seasons. They haven’t been especially high-quality shots, either. Only 3 of his makes were open looks. The other 29 were contested. He’s been even better in the short midrange, knocking down 52% so far, after averaging a little over 47% the last two seasons, but only 8 of his 30 makes were open shots.

He’s knocking down difficult shots, and doing it more often than ever before.

The common theme for most of DeMar’s attempts is that he gets to his spot and takes the shot he wants to take, almost without consideration for what the defender is doing. He’s never in a rush and rarely looks uncomfortable. In the long-term, though, he hasn’t shown the ability to make more than 44% of his midrange attempts over a full season, so it’s unlikely he’ll continue to hit these shots at such a high rate, especially without a corresponding improvement in shot location or openness.

It’s understandable if all of this sounds like a bad case of regression waiting to happen, but there’s reason to think DeMar won’t cool off quite as much as you might expect.

He could keep it up all season

Even if he falls back to last year’s averages in the midrange, that’s not even one less made basket per game. It would hurt the offense a little, and probably lead to at least a little adjustment in shot selection, but it’s not the end of the world. Most of DeMar’s long midrange shots come late in the shot clock because he serves as the option of last resort when the team’s primary and secondary actions don’t work. That he can even get a decent look late in the clock has its own value.

On top of that, DeMar’s game has evolved enough since last season that the Spurs might not even notice. While it seems every player in the NBA is increasing their 3-point attempts, DeMar has gone the other way this year. He’s never been that good of a shooter off the dribble from distance, so it makes sense that he’s cut the number of threes he takes nearly in half, down from 3.6 per game last year to 2 per game so far this season. He’s also limited the number of non-catch and shoot threes he takes, which is good, because he’s missed every single one he’s attempted so far.

But he’s only taken six, and all but one came at the end of the shot clock or quarter and were good attempts, given the game context. He’s shooting 5/13 on catch and shoot threes, which is a very small sample size, but a good sign nonetheless (NBA.com will show you he’s 5/20 from three overall even though that turnaround at the end of the 4th quarter of the first Lakers’ game was clearly a two).

In place of those threes he used to take, he’s increased his attempts at the rim, where he’s making 62%, per CTG. Nearly a third of his shots this year have come within 4 feet of the basket. Some quick math will tell you that making 62% on 2s is worth as much as 41.3% on 3s. In terms of overall value, that’s an over-simplification, because it obviously ignores drawn foul rates, offensive rebound rates, and effects on spacing, among other things. But for a player like Demar, that reallocation of shots can be powerful, especially since his forays to the rim open up his playmaking ability.

That leads to another reason to be optimistic about DeMar’s uptick in production. He’s driving more often than ever. After averaging around 16 drives per game the last 3 seasons, Demar is driving more than 19 times per game so far this year — which leads the league. And he’s been incredibly efficient with those opportunities.

Of the 35 players averaging at least 10 drives per game, DeMar is scoring the 4th most points per drive and has the 11th lowest turnover rate on those drives. He’s the reason the Spurs have risen from near the bottom of the league in points per drive last season to 2nd this season. That he’s scoring so well on his drives isn’t surprising at all. In fact, DeMar scored more points per drive than any player with more than 10 per game in both 2015-16 and 2016-17, before dropping to 13th last season.

The Spurs appear to have reinvigorated his attack. Some of that has to do with him filling in for the team’s two injured point guards, but it also has to do with the way DeMar’s skills fit into the Spurs offense and how capable he is of taking advantage of the opportunities it provides him. So far this year, nearly 20% of his made shots are essentially uncontested looks at the rim.

He does an excellent job attacking one-on-one, especially against mismatches.

He excels at attacking seams in the defense and moves well off the ball.

He puts his pump fake and outstanding footwork to good use, turning solid defense into open layups.

And he spends a lot of time on the floor with + passers, which means every now and again, he gets a freebie.

All of that penetration, and the points it produces, leads to double-teams, traps, help defense, and eventually, over-helping, and DeMar has been great at finding the open man. According to PBPstats, his 68 assists have been worth 161 points to the team so far, and his 16.0 assist points created per game is 16th in the league.

Along with the 264 points he’s scored, DeMar has accounted for over 38% of the Spurs’ total offense, highest in the league.

Of all the things that make DeMar’s first 10 games feel special, this seems like the most relevant. For a team, and in particular an offense, that struggled with so much last season, he’s been the perfect addition.

The return of Derrick White should mean a decline in some of these numbers. With another ball handler and playmaker available, it’s likely DeMar’s minutes will decrease. He’s still 2nd in the league in minutes per game, but will almost certainly slip down the board at some point. That alone will cause a dip in his per game numbers, and it will be interesting to see how Derrick assuming some of the pick and roll duty affects the rest of Demar’s game.

Other issues will arise as well. The NBA season is long, and team’s go through multiple evolutions as they develop throughout the year. Nobody, not even the Spurs, knows what they’ll look like in April. They need look no further back than last year to see that. The 2017-18 squad spent much of the year in 3rd place, before nearly falling out of the playoffs as the season came to a close.

That could still be the fate of this team. After all that transpired over the last year – the DNP-RIM’s, the injuries, the unrest, the turnover – it might be more surprising if it isn’t. But there’s much more to a player’s impact than points scored or wins and losses. This year’s team feels completely different that that team did, and it’s easy to see why.

Regardless of how the season plays out, DeMar’s blistering start has completely changed the conversation around this team and its place in the league. Whether he can midrange his way into dark horse MVP candidacy or not, he’s already made more of an impact than almost anyone expected. It’s only been 10 games, but oh what a 10 games it’s been.

* Stats from Cleaning the Glass, PBPstats, Basketball Reference, and NBA.com. Video from 3ball.io.