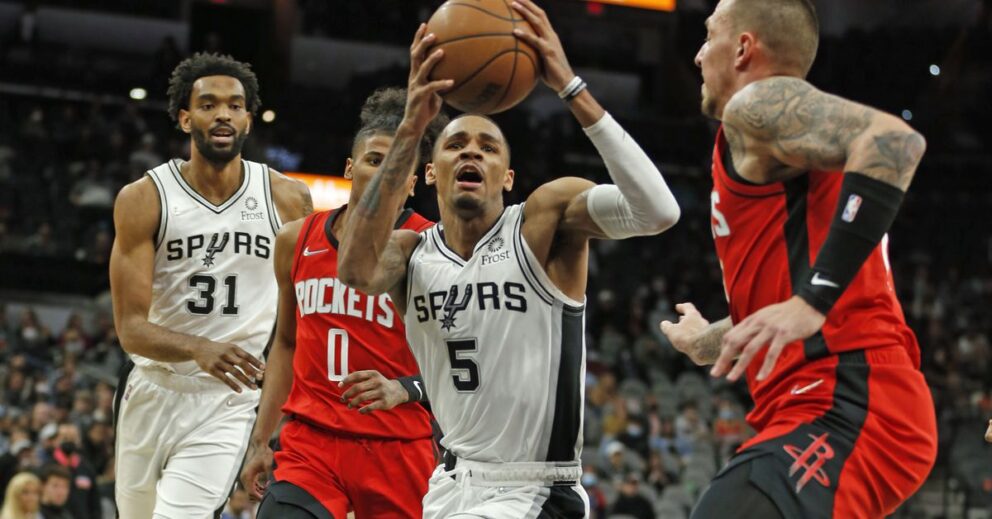 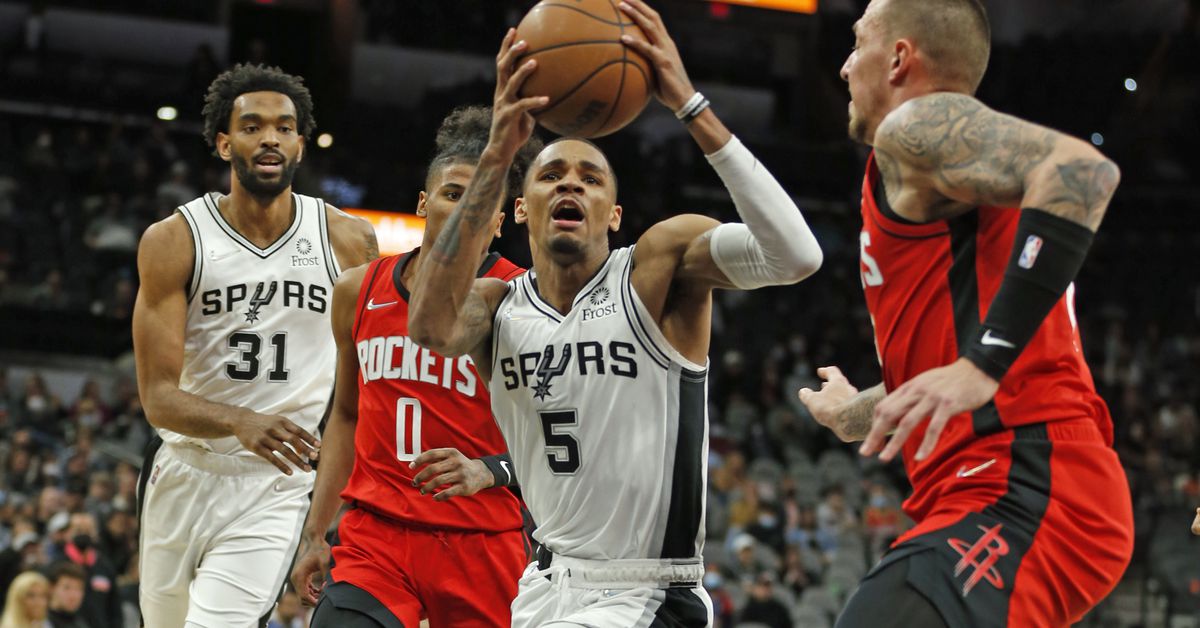 The Spurs’ MVP notched another triple-double and set a new career-high in scoring, but it was not enough to overcome the Houston Rockets. A quick-paced game between the two teams had the good guys in position to win their first game of a seven-game homestand, but the Spurs came up just short. Dejounte Murray led all players with 32 points, 10 rebounds, and 11 assists. Bryn Forbes came off the bench and contributed 21 points on 6 for 11 shooting from the arc. Fresh off his stint in Health and Safety Protocols, Keldon Johnson poured in 18 points.

Dejounte Murray continues to carry the Spurs in virtually every statistical category this season. Not only is he a nightly threat for a triple-double, but the team values his floor leadership and his work on the defensive end as well.

Murray’s evolution as a player includes his ability to attack the basket and make buckets when the Spurs need them. This drive to the hoop complete with an And-1 demonstrates how far the young point guard has progressed.

Oh my word. Lonnie Walker IV cocked this one back and fired it into the hole. I wouldn’t be surprised to find tiny trampolines in his shoes with how high the man jumps.

Bryn Forbes was on fire on Wednesday night. He had the greenlight to shoot, taking 11 shots from beyond the arc. Making 5 threes in 8 minutes, Forbes kept heat checking himself anytime he found himself with the ball from deep.

Murray, here, makes great use of those long arms to snake his way to the paint and softly guide the ball through before the halftime buzzer. Murray’s ability to use a combination of speed, body position, and timing allows him to create shots for himself like this pretty layup.

Keldon Johnson and Dejounte Murray played a little hot potato in this back-and-forth sequence where Johnson ends up with the spud for a reverse layup.

In this sequence, Lonnie Walker was nice enough to share with Murray after his steal on the defensive end. The Spurs had 10 steals for the game, which made up the majority of the Rockets’ 14 turnovers for the night. San Antonio averages 8.0 steals per game, which is good for top ten in the league. Their fast-paced offense needs fuel from their defensive game to create easy points off of turnovers like this one.

Never leave your feet while holding onto the ball–unless you’re Dejounte Murray. Murray on this play made his into the paint and hung in the air looking for a teammate to pass to, but at the last second he threaded the ball to Keita Bates-Diop for a no-look dime. Bates-Diop’s minutes have been up and down this season, but he remains an integral player for the Spurs whenever they need a quick sub-in starter.

And last but never least, the full-game highlights:

Next up, the Spurs take on the Cleveland Cavaliers in the first game of a back-to-back on Friday, January 14, 2022.