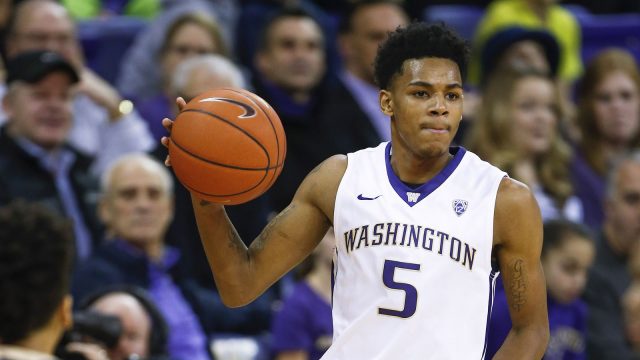 With the 29th pick in the 2016 NBA draft, the Spurs selected Dejounte Murray out of Washington.

Before the draft, it was hard to imagine him being there when San Antonio selected, as he was one of the players invited to the green room. The 19-year-old combo guard had shot up in mock drafts and many considered him a lottery talent. Yet there he was late in the first round for the Spurs to take him and possibly turn him into their latest draft night steal and their sixth man of the future.

Murray wasn’t supposed to be a one-and-done prospect but the great individual season he had in Washington had scouts sniffing around. He averaged 16 points, six rebounds, four assists and two steals as a freshman and decided to declare. That means he’s a project but one that seems to have the talent to be worth the wait, as he could have been a higher pick in a couple of years had he stayed in college.

It’s hard to see Murray playing right away for the Spurs. He’s 6’5″ and has good length, sporting a 6’9″ wingspan, but he needs to add weight before he’s able to defend anyone at the NBA level. He’s also turnover prone at this stage and lacks the solid three-point shot required to play off the ball. Just like Cory Joseph did, Murray might spend most of his rookie season in Austin, where he will get to continue to develop his point guard instincts and his shot. Fans will have to be patient with him….Read More

Source: Dejounte Murray could be the Spurs’ sixth man of the future – Pounding The Rock