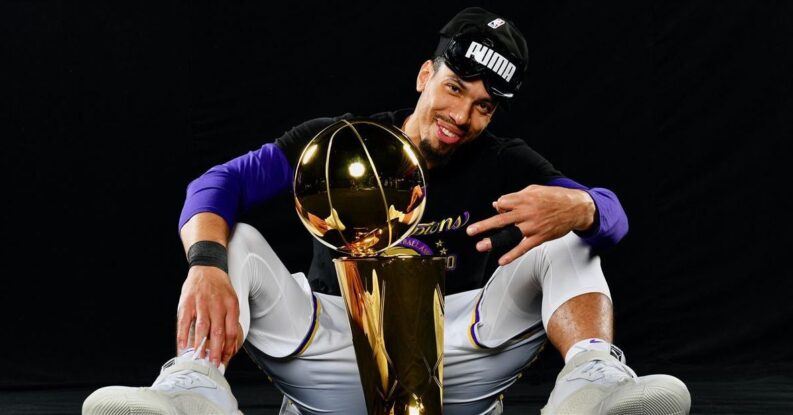 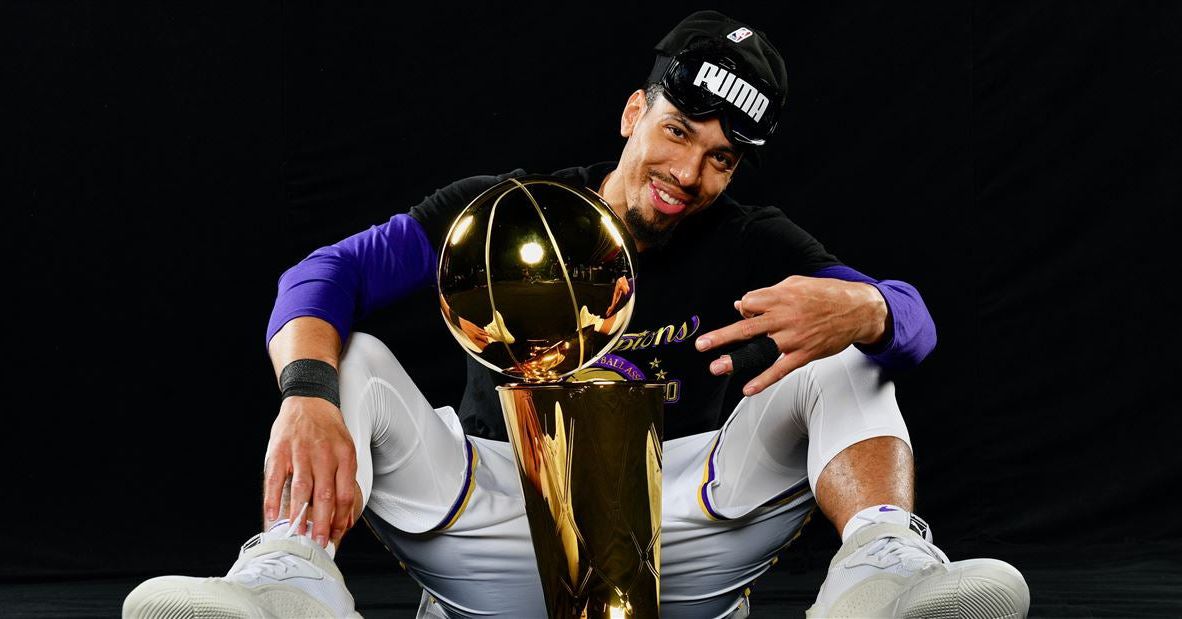 I have written a great deal about Danny Green for Pounding the Rock over the years. At one point I wrote a piece which compared him to notorious non-shooter Tony Allen of the Grizzlies. That piece led directly to a faux late night call from Danny to me, described in a 2016 piece. In that phone call, DG pointed out that his winning percentage was the highest ever. I just checked for an update: DG still has the sixth highest winning percentage in the history of the NBA at 72.7%. That translates to 59 wins per season. Those are amazing numbers. (If you are curious, the all-time NBA leader in winning percentage is Kawhi Leonard.) Danny also had the sixth most wins in the 2010-2019 decade.

An article from 2018 included a poll of Pounding the Rock readers asking them to identify their favorite active ex-Spur. The winner, handily, was Danny Green.

Earlier this year (in the Before Times), I wrote about finally meeting Danny at a Staples Center event, in an article entitled “Danny Green is still a Spur at heart”. I didn’t mention the Tony Allen comparison when we met. In a bit of foreshadowing, my piece talked about how cool it was that he appeared at a Fan Appreciation event while rumors circulated about whether he was about to be traded.

One of the reasons Danny is a Spurs fan favorite, and a favorite of mine, is his back-story. He spent four years at North Carolina, but even as a senior he was not first-team All-Conference, let alone All-American. After those four years, he was a second round pick of the Cavaliers. The Cavs thought so much of their Tar Heel rookie that they cut him in October 2010 before he even started his second season. The Spurs picked him up a month later, but then cut him six days later.

Does anything from the start of Danny’s career sound like a player who would become a three time champion with the sixth best winning percentage in NBA history? Fortunately, the Spurs gave him a second chance, re-signing him in March of 2011. He then became a key component of excellent Spurs teams, earning All-Defensive team awards, and coming inches and several bad bounces from winning an NBA Finals MVP in 2013. And he started for the 2014 Beautiful Game Spurs when they won the Redemption Finals in 2014.

Unfortunately, being a great teammate, a solid citizen, and a winner, does not protect a player like Danny from being traded. When Kawhi told the Spurs that he would not be staying with the team, Danny became collateral damage when the Spurs traded Kawhi to Toronto — where the two of them won their second NBA crown. Once that happened, Danny was finally able to choose his next team to play for. He signed a two-year deal with the Lakers and won his third NBA crown, starting every game in which he played.

But Danny’s two-year contract with the Lakers did not have a no-trade provision, meaning the team could trade him. Which the Lakers did, trading him from sunny Southern California to the Oklahoma City Thunder for a younger player. OKC is a step down from L.A., both in terms of weather and likelihood of winning another crown.

Fortunately for Danny, OKC re-traded him several days later, this time to the Philadelphia 76ers. If you turn your head just right, and squint a bit, the 76ers may be a contender to win it all. If the 76ers make it to the Finals, I will be rooting for my guy DannyGreen!! to win his fourth crown. Unless the 76ers are playing the Spurs in the Finals (but it’s not looking like that will be a problem).

Side note: If you want to have a long NBA career with one team, don’t have Green as your last name. DG will be a free agent after this season, which means he might be on his fifth team in four years when the 2021 season starts. Another Green and former Spur, JaMychal Green will be on his fifth team in six years when he suits up for the Nuggets on opening night. And Jeff Green will be on his tenth team in his thirteen-year career when the Brooklyn Nets start their season. Put another way, if you are an NBA player named Green, rent — don’t buy. (Unless your first name is Draymond.)