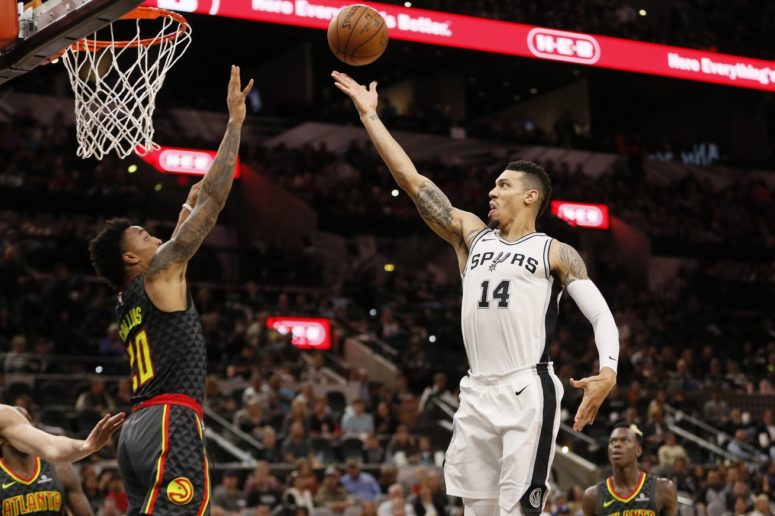 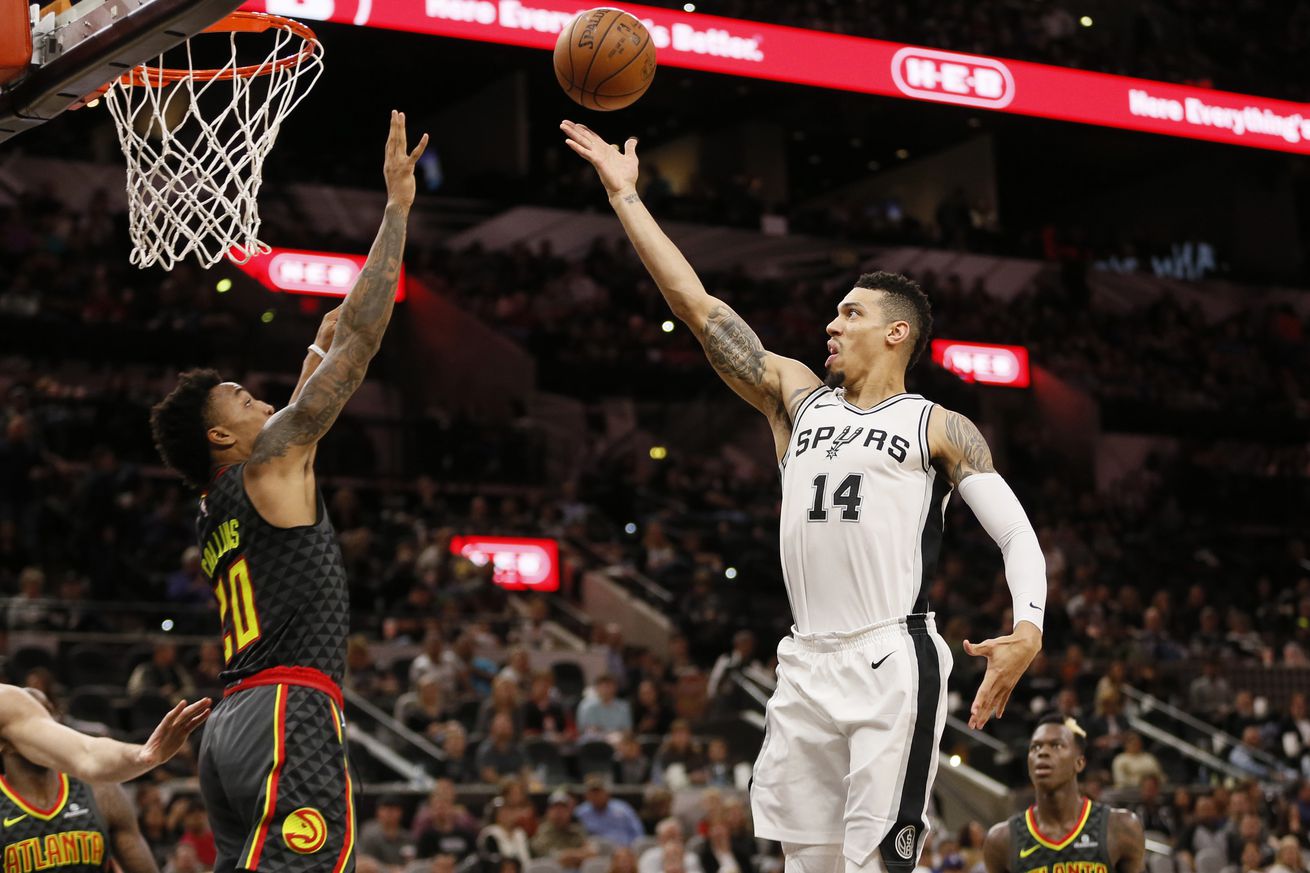 Improvement is a process. It’s also typically non-linear. There’s no guarantee that because someone shows growth in one skill, they will continue to get exponentially better at it. That’s why it’s so frustrating to project player development.

Danny Green was an anomaly, in the best way. He fulfilled his perceived potential in a weirdly tidy manner. He projected as an elite 3-and-D wing and became just that. And he did so in a predictable, continuous path.

As a defender, he first made things hard on his assignment using his length and energy. Then he became a bonafide stopper. Last season he was selected to the All-Defensive team. As a shooter, he honed his craft, first hitting open looks with his feet set. Then he started hitting shots on the move. Now, his percentage might be down, but he’s a deadly weapon from everywhere beyond the arc that other teams have to honor. His development in those areas was like a video game in its linearity — he just kept leveling up.

That’s probably the reason why there was some dissonance when he started showing improvement as an off-the-bounce threat. We’d seen him try this before, and he failed embarrassingly. He’d turn the ball over with his clumsy dribble. He’d launch floaters that had no hope of falling and commit charges while he was attempting them His one-dribble pull-up showed promise at one point but it was abandoned. There was nothing tidy or linear about Green’s development into a more well-rounded scorer. So it was easy to dismiss it.

Sometime last season, I kept reading tweets about Green doing better on offensive plays that didn’t involve catching and shooting. I wasn’t convinced. The narrative and the eye test were showing that something was changing. The numbers, however, suggested things were largely the same. He was scoring more on the break and more of his makes were unassisted, but his offense was more three-point reliant than ever. His drives per game were around his career average. So were his dribbles per touch.

It would take another year before the small leap that was foreshadowed in 2016/17 actually happened. Now, it’s undeniable that he’s become a more versatile offensive threat.

This season Green is averaging more drives and more pull-ups than he ever has. He’s also averaging more dribbles per touch since the NBA started tracking that. Two-pointers account for a larger percentage of his buckets than at any point in his time as a Spurs rotation player. He’s been doing that through an uptick in points in the paint and, more significantly, points from the mid-range area. He goes all the way to the rim when he can, but he also pulls up if the painted area is crowded.

Now, most of Green’s value still comes from his 3-and-D ability. He’s a mediocre finisher inside and is shooting 39 percent on mid-range jumpers, a solid but unspectacular percentage for his volume. Still, it’s a big deal that he can put the ball on the floor when he’s chased off the three-point line and make a play even if his passing targets are covered. It gives another dimension to his game, one most of us assumed he’d never develop.

It was hard to imagine Green improving his off-the-bounce game at this point in his career, especially since he hadn’t showed steady growth in the past, like he had in other areas. Yet he has done just that, despite arguably being at the tail end of his prime.

It’s a testament to his work ethic, and just the latest example of how hard it is to predict development.

The Spurs were supposed to evolve into a small-ball oriented team. It hasn’t happened yet. Their two most used lineups — by far — include two bigs. The third most used lineup, however, is an effective unit featuring just one big man.

The Patty Mills, Manu Ginobili, Danny Green, Rudy Gay and LaMarcus Aldridge lineup is outscoring opponents by a very good 10 points per 100 possessions. It’s not a great offensive unit but it plays incredibly stingy defense, allowing just 90 points per 100 possessions, a mark that would lead the league. It’s a switchy unit that can smother opponents into mistakes. It also has plenty of size up front to punish opponents in the paint and the offensive glass.

Yet it’s been featured in just 11 of the Spurs’ 24 games and has gotten just a little over three minutes a game of run.

Fouling is a problem for that lineup, as is rim protection. That group has turned the ball over a lot, too. Still, it’s killing opponents even while shooting 27 percent from beyond the arc, a number that is bound to go up. It’s also the closest version of the lineup the Spurs will likely have to use in the playoffs if they run into the Rockets or Warriors. Giving the players time to get familiar with each other in that configuration seems like a good idea.

Maybe Pop is simply waiting until Kawhi Leonard returns to fully deploy his small-ball units, including a variation of this one. It would still be great if this iteration got a little more run in the meantime.

The Spurs getting crafty to free Bertans

With Kyle Anderson out for a while, Davis Bertans has been getting more minutes. Some teams seem to have forgotten about him and have left him open. He’s made them pay, as Mark Travis expertly pointed out.

After the last few games, however, opponents will start recognizing the threat that he is and stay close to him. So the Spurs will have to work to get him open shots. Let’s look at a simple yet clever way to do that, using a strong side pick and roll as a distraction and a weak side cutter as decoy.

The initial pick and roll gets the defense moving, but the juicy stuff is happening on the weak side.

Mills starts on the corner but uses a Bertans screen at the left win. Shooting the gap is not an option for Mills’ defender, because Patty could easily stop behind the screen and take an open three-pointer. Since he’s tracking Mills, the big man guarding Pau Gasol has to take one step toward the paint to help as his teammate recovers. Bertans’ defender should have taken a step toward Gasol, but instead also chases Mills. The second he does that, Bertans doubles back and uses a Pau screen to get open.

Bertans misses, but it’s still a great play. The Spurs have others that are as equally crafty. If Davis keeps getting minutes, we’ll be seeing more and more of them.