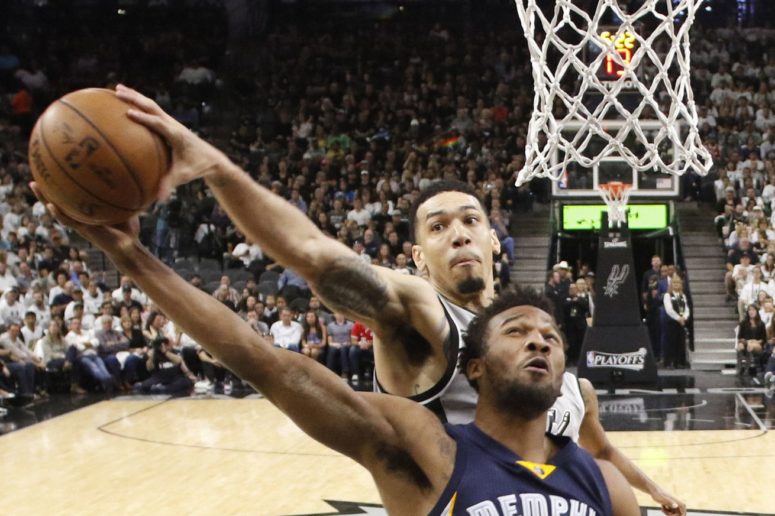 Green’s shot returned to him last season, while he remained one of the league’s best wing defenders.

Midway through the second quarter of Game 1 versus Memphis, Danny Green was the lone defender back on a three-on-one fast break. The Grizzlies’ Brandan Wright advanced the ball to Mike Conley who returned it to Wright just in time for the big man to go up for the dunk. Green, positioned under the basket, didn’t jump, foul or get out of the way; he simply timed his swipe at the ball perfectly to knock it loose. The third man on the break, James Ennis III, collected the ball and kicked it back to a trailing Vince Carter, who was chased off the three-point line by a sprinting Green. Carter would instead pump-fake and dribble the ball out again. Green had recovered to switch onto Marc Gasol, whom he was now desperately fronting to prevent from receiving the ball in the post from Carter, who would then opt to drive the ball into a mob of silver jerseys and miss a contested reverse layup.

Despite going 0-for-2 from the field and scoring just two points, Green was probably the second-most-important Spur on the floor that night, rotating, blocking shots (he had four), and shadowing Conley in the game’s decisive third quarter. That’s how the shooting guard remained a subtly impactful player in the aggregate, even when his shots weren’t falling.

In the micro, he does the little things that elevate his teammates’ play. His gravity allows an aging Tony Parker to penetrate without facing help; his quick release keeps defenders from doubling LaMarcus Aldridge in the post, and his constant off-ball movement takes attention off Kawhi Leonard (Zach Lowe has highlighted one wrinkle, the “Danny Green cut,” as one of the ways Green is able to keep defenses guessing despite a lack of playmaking abilities). He’s also finished between 1st and 6th among shooting guards in ESPN’s Defensive Real Plus Minus every season since the stat’s been around.

In the macro, Green is an ideal complement to Leonard on the wings, taking on primary defensive responsibilities often enough to allow Leonard to focus his energies on the other end. It’s at least worth asking: does Leonard develop into the type of offensive force he’s become without a guy like Green who can readily pick up the defensive slack?

He may never become a true creator off the dribble — a dash of dread is still the appropriate reaction any time he puts the ball on the floor — but Green showed improvement in that area whenever teams took his three-point shot away last season.

Guarding Danny Green is no longer as simple as chasing him off the three point line pic.twitter.com/c7WOOXFbwv

Opponents are wise to try and turn Green’s offensive weakness against him, but it’s becoming more difficult. We saw it best in the Western Conference Semis, whenever the Rockets tried to hide James Harden on him. Green was an aggressor throughout the series and was able to get to the rim often, most notably with this and-one that helped push the Spurs to victory in Game 5.

Danny takes it to the rim! #NBAPlayoffs pic.twitter.com/73PDqp1nRV

Counting stats won’t sell Green’s value to people who still focus on the “shooting” part of his positional designation. His scoring average (hovering just over 7 PPG for a second year in a row) doesn’t impress, and his 37.9% three-point percentage, while a big improvement over 2015-16, was still middle-of-the-pack among Spurs players. Defensively, he gets about a steal and a block a game — which is fine — but still greatly understates his impact. Even his on/off numbers are softened by the Spurs’ terrific bench.

In that way, he remains the Spurs’ Peter Parker: tirelessly erasing mistakes, maligned by at least a certain portion of the public, and never far away from his next earful from a silver-haired boss. Yet, he should continue to be a bargain for the contract he’s on and a quietly important part of whatever the team is able to achieve next season.