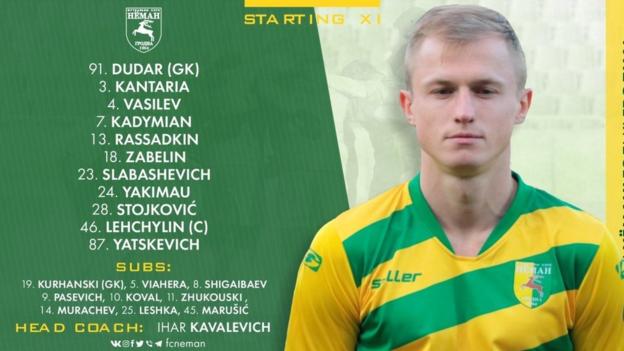 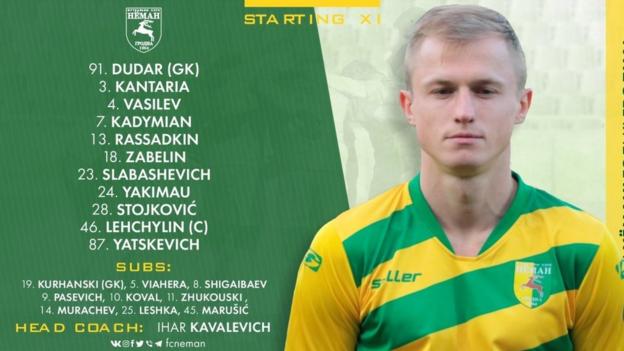 I knew Neman Grodno were the team for me the moment I saw their kit. And I knew for sure when their goalkeeper came up for a free-kick at 1-1 in a league game four weeks into the season.

As a football journalist you often have to hide your allegiances, but in this case I cannot – I am a Neman Grodno fan (since 29 March).

Following this Belarusian team and watching them every week has helped fill the void in the absence of any ‘normal’ live football.

It is the only European league not to be suspended because of coronavirus. While I don’t condone the league continuing during the pandemic, if people are going to keep kicking a football, I’m going to watch it. Except the Nicaraguan league. Even I have my limits.

I knew picking a club to follow in the Belarus Premier League would be a big decision. It did not feel very BBC to pick a team with a rude name (an FK Slutsk Worldwide Facebook fans page now has almost 6,000 followers) and I’m too much of an underdog to pick Bate Borisov.

As an Oxford and Republic of Ireland fan, Neman Grodno’s yellow and green crest stood out. They have only won one major competition in their 56-year history – the Belarusian Cup two years after independence in 1993.

Yellow and green both in their kit ✅

From the moment I watched their, sorry our, first game I was hooked. Their kit is magnificent, much better than their Wikipedia page had suggested. In fact it looks similar to the shirt my Fantasy Premier League team had.

Their fans made plenty of noise in the first game which helped too (although I wasn’t convinced about a Minions banner I saw in the crowd). However, that was the last time I heard them as they have since boycotted games in protest at the league still carrying on during the coronavirus pandemic.

In total I have watched six Neman Grodno games streamed legally through my TV (I did not start following them until the second weekend). The Belarus Football Federation shows every game live on its YouTube channel – although for the first couple of games I was relying on betting websites and a Belarusian stream the club tweeted a link to.

I was there (on my sofa) when he did it again in the next game and Dinamo Minsk scored into an empty net to make it 2-0.

I was there (on my sofa) when we gave those upstarts from Minsk, FC Energetik-BGU, a 3-0 hiding.

My 16-month-old baby – who adopts my teams by default – has probably watched more Neman Grodno matches than Oxford games in his short life so far.

There are sacrifices too. You try telling your wife you can’t use a click and collect slot at the supermarket on a Saturday because Neman are away to Shakhtyor Soligorsk (it ended 0-0).

Also nobody tell her why I’ve genuinely started looking into going to Grodno – near the Polish and Lithuanian borders – for our family holiday when this is all over.

And I am far from the only one – there is now an English language Neman Grodno fans account on Twitter, Glasgow and Yorkshire supporters pages and ones for Ireland and Turkey too. And “we” are far from the best supported Belarusian team worldwide.

I should say the standard of football is terrible. But having spent most of my match-going days watching Oxford in England’s lower leagues or Limerick in the League of Ireland First Division, that is nothing new.

It will be hard to say for sure whether I keep watching every game when English football returns. But I’ll certainly always keep an eye out for their results.