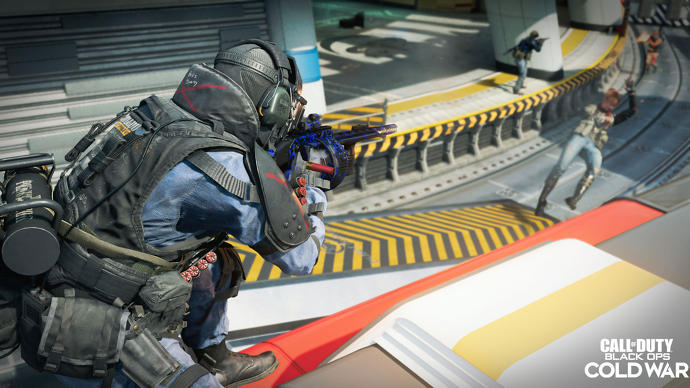 It’s a remake of Black Ops 2’s Express, and it’s due out on 4th February.

Express is known for its hi-tech train station. It’s a roughly U-shaped map with two train tracks looping around the main hall. The focus is mainly on close-quarters combat in the hall, but the glass ceiling means scorestreaks can have an impact inside. There’s room for some long-range combat across the train tracks. The high-speed trains bolt by the station on one of the tracks, and they will kill you if you get in their way.

Added to Black Ops Cold War and Warzone yesterday was the Wakizashi, a sword that has slightly better reach than the standard knife but is slower. The Wakizashi is unlocked via an in-game challenge (with the combat knife equipped, execute two finishing moves in 10 different matches), or you can shell out real-world cash for a blueprint of the sword via the 1600CP Disavowed Assassin bundle.

On 21st January, Black Ops Cold War and Warzone gets a new operator called Zeyna who fights for NATO. Zeyna fought alongside Bulldozer and Russel Adler at The Pines mall to take down stitch in the season one cinematic.

Here’s the official blurb on Zenya:

“This Senegal-born DGSE Mobility and Heavy Weapons specialist has been a motorhead for as long as she can remember. Growing up around the garages of her rally driver father, she jokes that she has gasoline in her veins. Although she is a risk-taker and a bit of a wild card during infiltrations, Zeyna’s colleagues know her to be the one you want at the tip of the spear.”

Meanwhile, expect a snipers-only moshpit to hit Black Ops Cold War later in season one. Fireteam is also getting an endurance mode (there will always be five bombs available instead of an initial set of five that gets reduced to a single bomb). Here, the score limit will be doubled from 500 to 1000. Treyarch said this makes endurance mode a good place for completing multiplayer challenges.

And finally, Treyarch said league play is coming during the second half of season one, although we don’t know how exactly it will work. Here’s the roadmap for the rest of Season One: