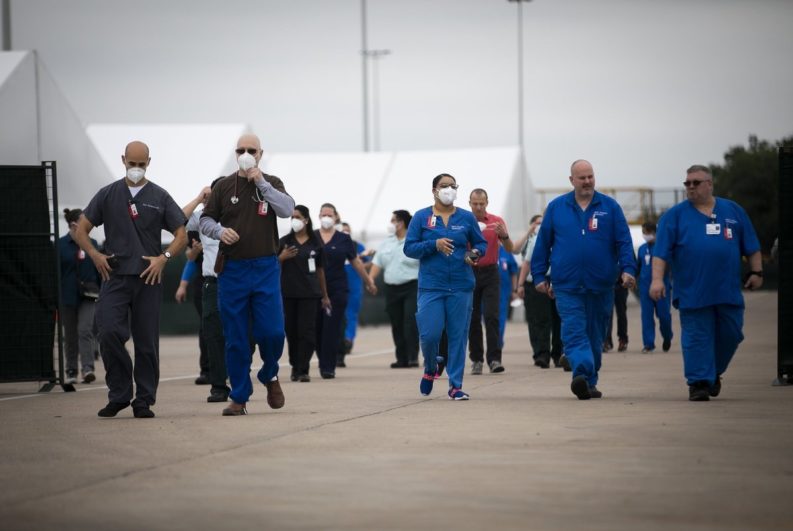 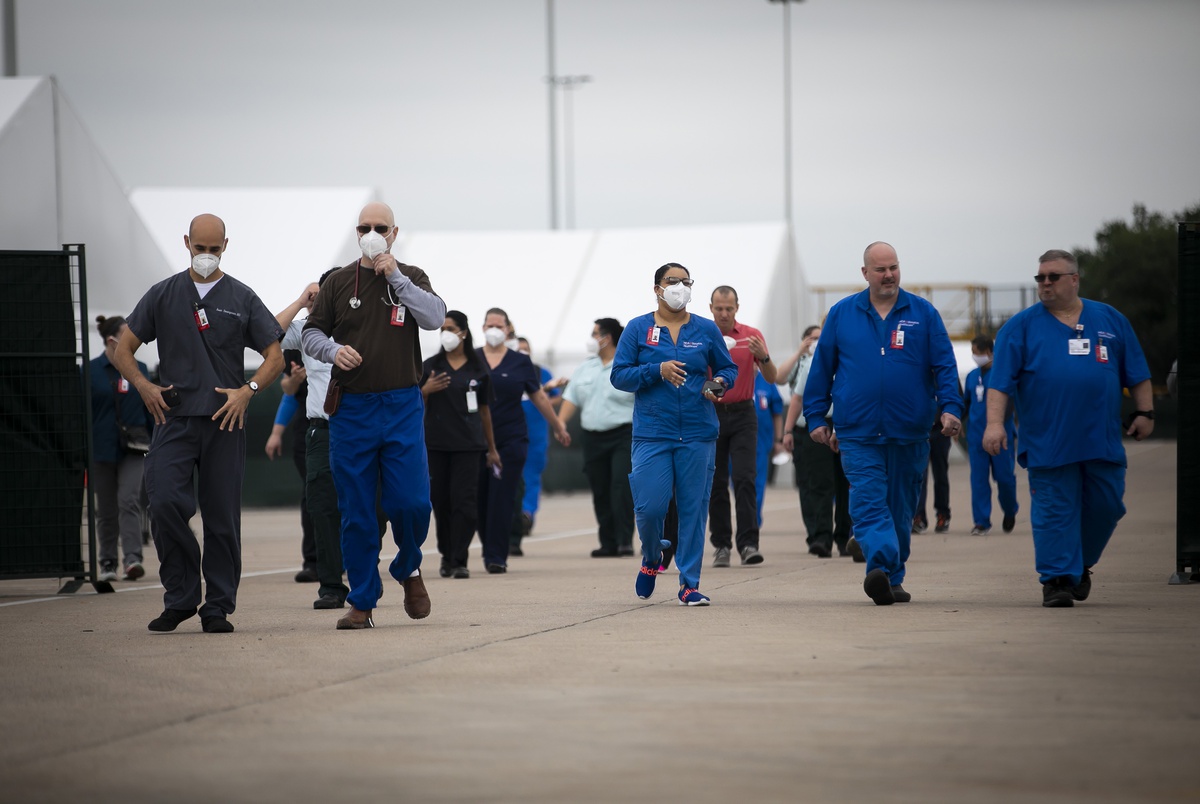 A call center run by the University of Texas at Austin Dell Medical School gets a notification every time its nurse triage team calls a patient with the bad news that they’ve tested positive for COVID-19, the disease caused by the new coronavirus.

That’s the signal for a separate team of a few dozen medical students, graduate students and volunteers to make a second call to the patient, beginning an arduous process that experts say will be crucial for monitoring the spread of COVID-19 as society inches toward reopening: contact tracing.

The caller’s goal: to quickly obtain a list of people and places where the patient might have spread the virus. Then they must track down everyone on that list to encourage them to self-quarantine and get tested for the virus before they potentially infect a whole new group of people.

First, “we develop a bit of a rapport with the [patient],” said Darlene Bhavani, an infectious disease epidemiologist who oversees the center’s operations. How are they feeling? What resources do they need? Do they have a thermometer, and can they isolate themselves from other people in the home?

The phone call might last hours and cover weeks of the patient’s movements. Bhavani had 67 contact tracers working in partnership with Austin’s public health department as of mid-April. That may be enough for now, but she said she needs more volunteers “to prepare for an eventual increase in cases that may or may not happen as Austin opens up and people start moving around more.”

With Gov. Greg Abbott poised this week to announce a plan for easing restrictions on Texas businesses, experts are raising questions about whether the Texas public health surveillance system can ramp up its testing and contact tracing operations enough to safely inch back toward normal life.

Health experts say that even gradual steps to reopen businesses will increase the number of people who become sick from the virus. To better understand where the virus is lingering, they say the state must rapidly increase testing. To track where it is spreading, they’ve urged the government to hire more workers to track down the contacts of those who become infected.

“An exit strategy, as we call this, is sort of difficult to suppose right now,” said Rebecca Fischer, infectious disease epidemiologist at Texas A&M University School of Public Health. “The risk being that as soon as we lift restrictions, whatever that strategy is, if it’s gradual or tiered or certain sectors of the economy or population are released first, we can certainly expect to see a spike in cases.”

“What we want to make sure is that we’re far enough into the tail end of the epidemic that that bump will be minor and it won’t wind up shutting down the economy again,” Fischer said.

Interviews with 10 infectious disease experts show a growing consensus among health experts that four steps are necessary to measure how successfully Texas is containing the virus — and guide politicians seeking to reopen businesses. Texas needs to test a larger percentage of the state’s population, isolate those who test positive, track down their contacts and order those people to quarantine themselves for two weeks.

Doing so, the experts said, will require personnel and lab capacity for testing and contact tracing that is perhaps an order of magnitude greater than what is currently available. And they say it will be expensive.

At the same time, pressure is building across Texas, and the nation, to end stay-at-home orders and other restrictions that have shuttered businesses of all types, slowed the economy to a crawl and cost millions of people their jobs.

“You’ve got two different camps that have two different altruistic goals,” he said. “So there’s always going to be some tension between those.”

Abbott has said that any orders to reopen will follow the advice of medical experts and will be linked to an increase in the state’s coronavirus testing capacity. He is expected to make an announcement Monday to provide more details about how businesses may begin to reopen.

Texans can expect a “massive amount of testing capability coming to Texas by late April or early May,” Abbott said on April 17 when pressed on specific numbers and a timeline.

For now, Texas ranks among states with the fewest tests administered per capita, according to the COVID Tracking Project, though the state’s reported death toll per capita is also lower than many other states’. Local health officials have blamed the unimpressive testing figures on kinks in the supply chain, as regions of the country with larger and deadlier outbreaks are given priority for testing kits.

In the eyes of public health researchers, the ability to perform contact tracing in Texas may be an even more limiting factor than testing. If public health workers cannot find an infected person’s contacts, it is far less likely that those people will be tested.

“You can’t just have one piece scaled up and the other not,” Bhavani said.

About 800 people are currently doing contact tracing in Texas public health departments, a figure that includes employees at state and local offices, said Chris Van Deusen, a spokesman for the Texas Department of State Health Services.

“We’re making plans now to increase that number significantly,” he said, promising that the state will provide more details about those plans this week.

How many is enough? Estimates vary, and experts said it will depend on the extent of the outbreak. Some policymakers have called for Texas to increase its contact tracing workforce by a factor of 20 — or even 50.

For weeks, teams of medical students and other volunteers who answered the call have done excellent work, Herbold said. But it’s not a long-term strategy.

“That’s not sustainable,” he said. “They’ve got other things to do.”

Governments may begin hiring more workers to fill the gaps. The U.S. Centers for Disease Control and Prevention plan to hire hundreds of people to perform contact tracing, according to the New York Times. In Ireland, more than 1,000 furloughed government employees are being redeployed to do contact tracing.

Workers must be trained to skillfully interview people and handle their confidential information with sensitivity, said Marilyn Felkner, a public health professor at the University of Texas at Austin.

“This is not something that we do all the time for all diseases, so we don’t have a lot of staff,” she said.

The U.S. needs about 180,000 contact tracers for the coronavirus, Andy Slavitt, former acting administrator for the Centers for Medicare and Medicaid Services, told The Texas Tribune. Other officials have put the figure even higher. Tom Frieden, the former head of the U.S. Centers for Disease Control and Prevention, has called for an “army” of 300,000 contact tracers.

Having an adequate workforce is “going to be a big limitation,” said Diana Cervantes, director of the epidemiology program at the University of North Texas Health Science Center School of Public Health.

“Testing is important, but you also have to consider what is done with those test results,” she said.

One of the medical advisers guiding Abbott’s plans to reopen businesses is Mark McClellan, director of the Duke-Margolis Center for Health Policy at Duke University, who co-authored a report about steps the country could take to “enable the U.S. to move beyond extreme and disruptive physical isolation measures.”

It proposed a COVID-19 surveillance system based on widespread diagnostic testing for people who are symptomatic or at higher risk of contracting the virus, such as health care workers or nursing home residents. And it called for robust surveillance of those tests — usually collected in a nose or throat swab to scan for the presence of the virus — for public health workers to quickly detect small outbreaks.

But politicians deciding how to implement those recommendations are finding that how to respond to the crisis has become a politically charged question. Asked whether there was a bigger threat to the country in staying home too long or not staying home long enough, voters’ answers split along party lines, according to a recent University of Texas/Texas Tribune poll.

The poll nonetheless found widespread support for stay-at-home restrictions. Seventy-seven percent of respondents, including a majority of Republicans and Democrats, said they supported requiring Texans to stay home except for essential activities.

“What we want to do is make sure that as we enter this phase of reopening that we’re paying attention to the counsel and advice that we’re getting from our health care experts,” he said.

And expanding testing capacity remains a top concern for local officials. “We’re hearing from our members that their citizens are still having a hard time getting access to tests,” Ott said.

Texas has administered more than 270,000 coronavirus tests in the nearly two months since the state’s first reported COVID-19 case. Expert opinions differ on how much larger that figure needs to be.

McClellan’s proposal recommended the U.S. build capacity to administer more than 100,000 tests per day, a benchmark the country has recently passed. Other proposals are far more ambitious. Researchers from the Harvard Global Health Institute have called for at least 500,000 tests per day nationwide.

“If you don’t find who’s positive or negative, then you can’t isolate them,” said Rodney Rohde, an infectious disease expert at Texas State University. And a shortage of lab employees is also a factor limiting the ramping up of testing.

“You can have millions and billions of tests, but if you don’t have the professionals to run them, there’ll still be a backlog,” he said.

As capacity increases, the state should expand testing for vulnerable populations, including people who are homeless or in nursing homes and prisons, said Ben King, an epidemiologist and research scientist in the Department of Neurology at Dell Medical School.

And the people identified by contact tracers who have been exposed to COVID-19 patients should also be prioritized, King said.

“That’s the lowest hanging fruit I can imagine,” he said. “We’re just not doing it.”