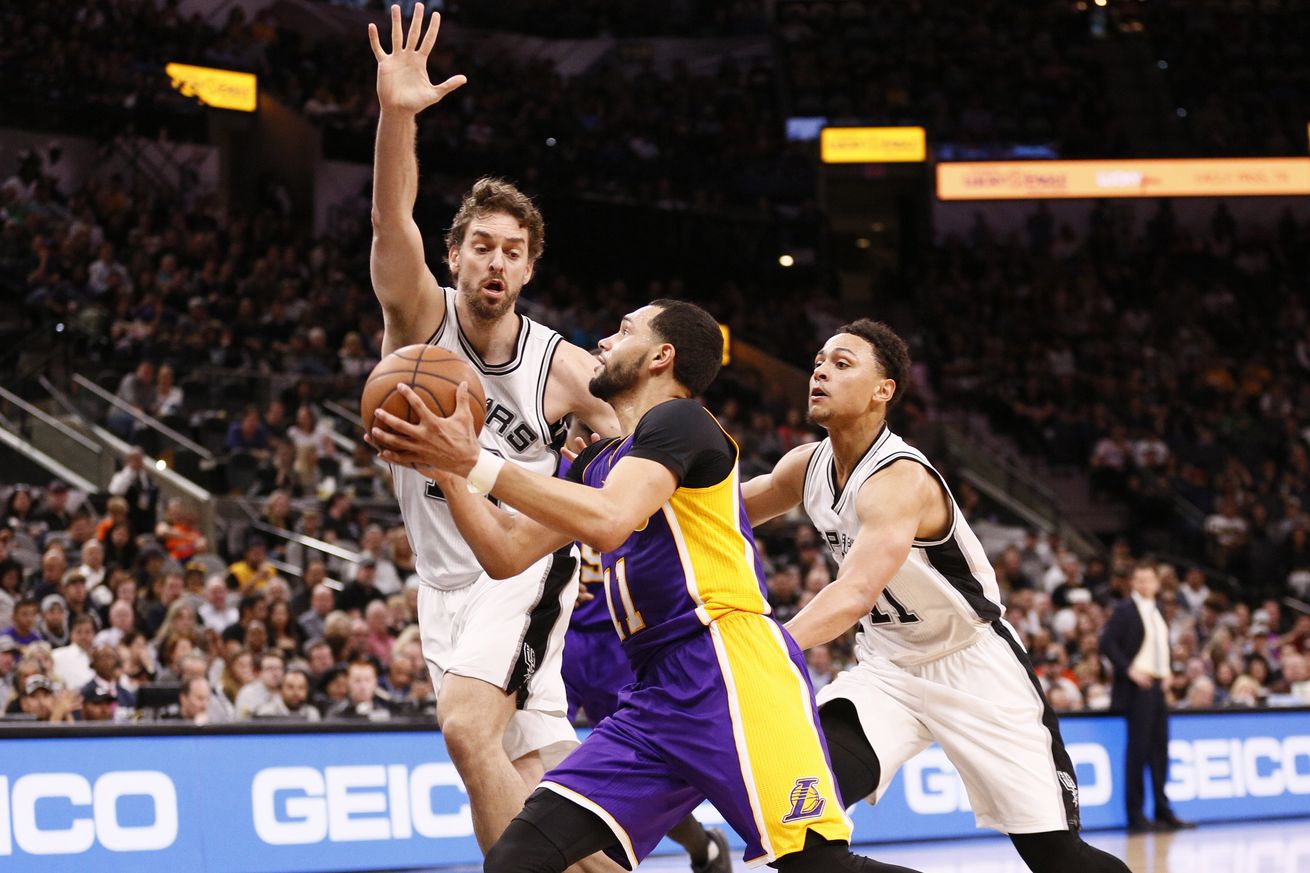 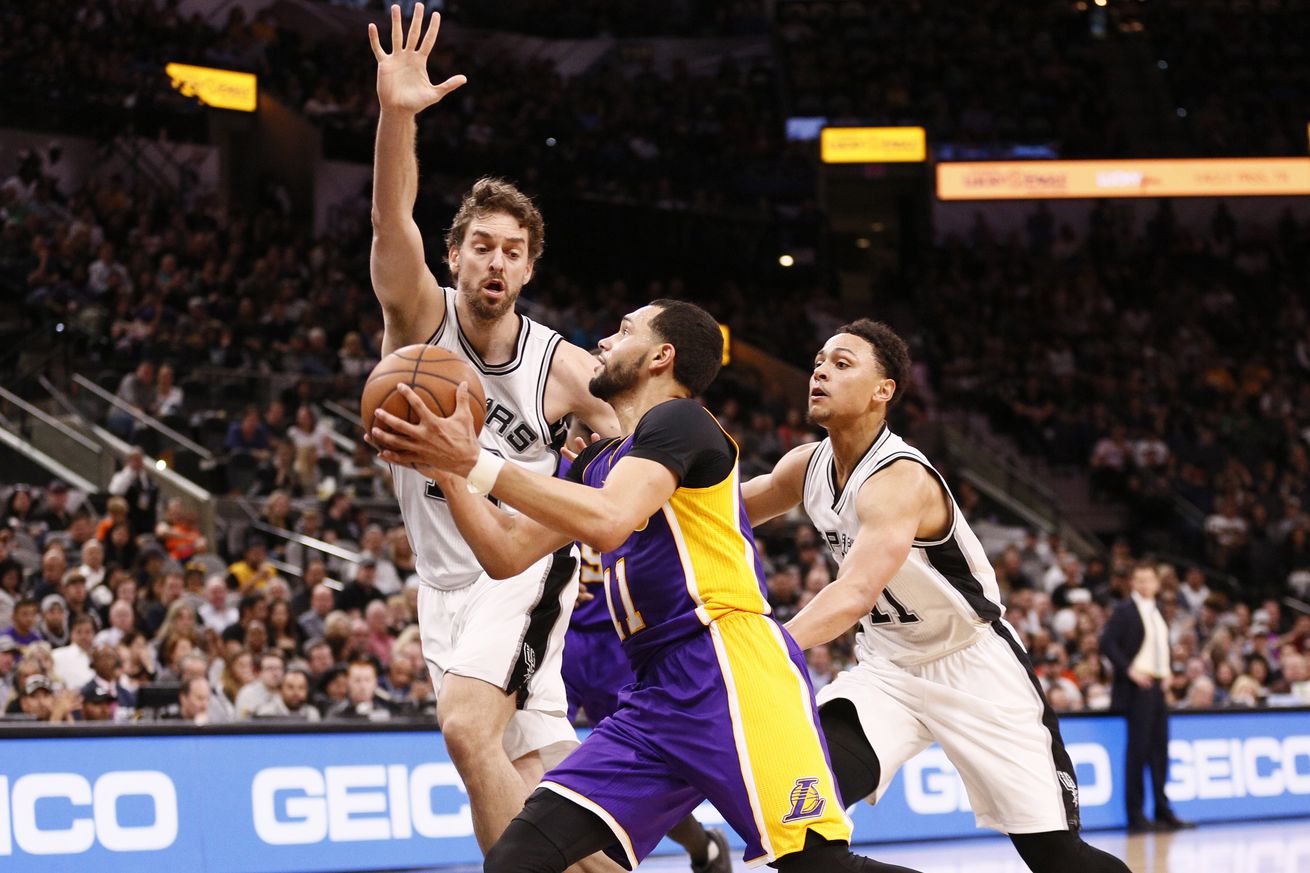 There’s one less game left in the season now.

Well, that was something. With the Spurs on the second game of a back-to-back (SEGABABA) and the team locked into the two-seed I was expecting to see at least LaMarcus Aldridge get some rest and maybe Kawhi Leonard as well with the team needing overtime to take care of the Memphis Grizzlies on Tuesday night.

But Gregg Popovich went with his normal starting lineup in this one, minus the injured Danny Green, and let’s just say they didn’t seem particularly interested in this game.

The game had an interesting start, with the Lakers dropping 31 on an uninspired Spurs defense in the opening quarter. The Lakers got 20 of their 31 in the paint. Combine that with a struggling Spurs squad that only managed 17 points for their side and it didn’t look good for San Antonio in the game.

Los Angeles would run their advantage all the way up to 26, at 40-14, in the early part of the second quarter at the end of a 17-0 run before the Spurs started to fight back. A 9-0 San Antonio run, fueled by defense (three blocks and two steals) got the good guys back into the game and by the time halftime rolled around the Spurs had cut their deficit to a manageable 12.

Gregg Popovich decided to give Kawhi Leonard and LaMarcus Aldridge rest in the second half and started Davis Bertans and Kyle Anderson in their place. With the Lakers playing loose the Spurs kept chipping away at their deficit. Tony Parker in particular was fantastic in the third, scoring eight points early on as the Spurs cut it to a one possession game with seven minutes left in the quarter on a Davis Bertans triple. Credit Tony with the helper. That was it for Tony for the night, joining LA and Kawhi on the bench for the rest of the contest.

The Spurs got back in the game but getting over the hump just didn’t happen with the Lakers doing just enough to keep the Spurs at bay, keeping it between a two and five point game for most of the rest of the third before Metta World Peace hit a three to push the Lakers advantage out to nine with a minute left to play. Jonathon Simmons hit a three to cut it to six going into the final period.

The fourth started with a pair of threes from Simmons and Bryn Forbes to tie the game up at 76. It seemed like the Spurs reserves would complete the comeback and put the game away as the momentum was fully with the Spurs but credit the Lakers players for digging in and fighting.

LA would run their lead back up to 16 with three-and-a-half minutes left to play and it looked like it was all over. That was when SA put together an 11-0 run, because why not in a game like this, to make it a 100-95 game with 1:19 left. The Spurs even had a chance to cut it to a one possession after getting a stop but Davis Bertans took a tough three that bounced off the rim.

And so one of the wackiest games I’ve ever seen came to an end with the Lakers, who are actually looking to lose games, came up with a win over the Spurs where they never trailed.

Time to move one, there’s nothing to take away from this one. Your Spurs fall to 60-18 for the season.

The Spurs get a night off before another back-to-back. They’ll visit the Mavericks on Friday and host the Clippers on Saturday. They finish the season on the road at Portland on Monday the 10th and then in Utah on Wednesday. The first round starts the weekend of the 15th with the Grizzlies almost certainly the Spurs’ opponent.