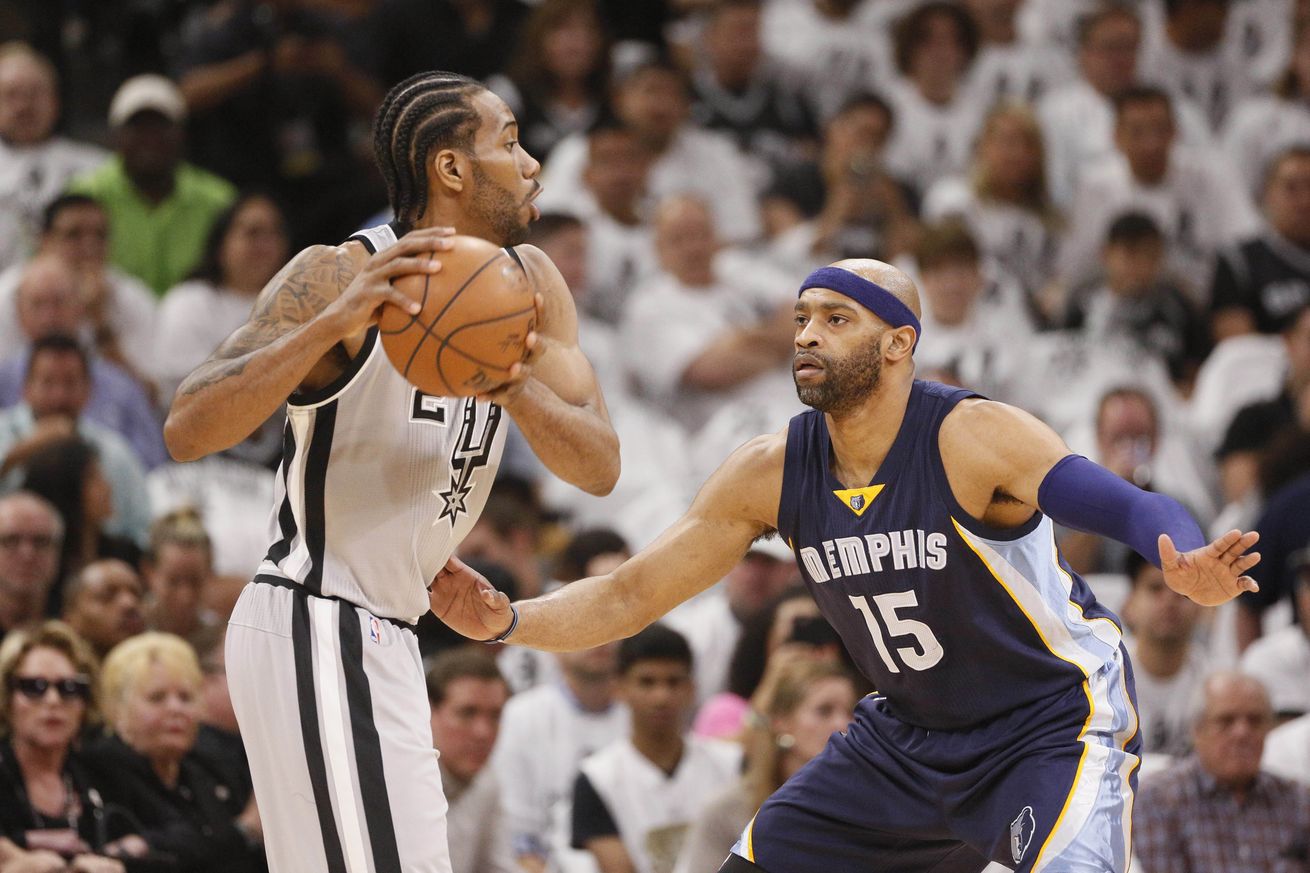 The Grizzlies loaded up on Kawhi, so we did his work off the ball.

A question from day one of this Spurs season was: Who would be the five guys on the floor when the game was on the line? Bill Simmons discussed the possibilities of a crunch time lineup of Kawhi Leonard, Patty Mills, Danny Green, Manu Ginobili and LaMarcus Aldridge with Zach Lowe on his Ringer podcast before the playoffs. There was a Spurs Playbook that looked at that same lineup but with Pau Gasol in for Green. It was hashed over and over in the comments section of Pounding the Rock. But nowhere was there an expectation of the Tony Parker, Mills, Leonard, Aldridge and David Lee lineup Spurs coach Gregg Popovich has used in Games 4 and 5 — a lineup that played a grand total of six minutes together during the regular season.

Why would Pop choose these five?

Aside from this ofer game, Parker has been a consistent scoring threat all series and is the only player besides Kawhi who can penetrate and create passing angles. Kawhi is Kawhi, the best player in Silver and Black. Aldridge, while having an underwhelming series, still changes the way the defense matches up and provides another isolation option late in the shot clock. Ginobili was nonexistent until Game 5 and Danny Green has been streaky from the perimeter, so Patty Mills is the most likely to help score the basketball. Finally, Lee doesn’t have the offensive arsenal of Gasol, the ability to stretch the defense like Bertans, nor the rim protection of Dedmon, but he might be the best blend of offense, defense, rebounding and passing. He grabbed eight rebounds in limited minutes Tuesday night. With the defense keyed in on Kawhi, Lee’s ability to slip to the rim and grab offensive boards is valuable. Still, no one would have predicted this unit being the closing group against the Grizzlies, and it was shaky defensively Saturday night in Memphis.

In Game 4, this lineup ultimately failed due to several key defensive breakdowns. Playing Parker and Mills together creates problems when they’re used in the pick and roll, and while Aldridge and Lee have had nice defensive seasons, they made critical errors positioning their bodies both on the pick and roll and in help. Offensively, Kawhi had to shoulder almost all the offensive load.

But Pop doubled down on Tuesday night in San Antonio, and this group exploded offensively and did enough defensively for a decisive win.

Here was a key play that gave the Spurs a seven point lead with just under five minutes left.

Such a beautiful play between Parker, Lee, and #Kawhi. pic.twitter.com/laUaqnVAPt

Parker initiates the offense, and it’s not just his shooting this series that adds value, but his ability to control the tempo and allow Leonard and Mills to play off the ball. What this also does is prevent Parker’s man from being an extra help defender.

Mills and Aldridge are on the weak side wing and block respectively. Again, their defenders have to hug them, and so the weak side help is limited. Lee, the player most likely to be ignored in this case, starts at the high post and comes down to the strong side short corner — a subtly brilliant move. Parker and Lee’s defenders can’t leave them as Parker has the ball and Lee is one pass away. This leaves Kawhi with room to operate.

Initially, it looks like Lee is setting a pindown for Leonard. Memphis sees this coming and is well positioned to switch the taller JaMychal Green onto him. Instead Kawhi circles under the hoop and cuts hard up the middle with James Ennis face-guarding him. Parker dumps the ball to Lee.

When Lee has the ball, Green has to respect him in the short corner, probably his most effective area on offense as both a scorer and passer. Conley drops down a bit, but not too far because he has to respect Parker. When Kawhi gets to the free line, he plants his right foot hard and uses a swim move with his right hand to backdoor cut through Ennis. Lee hits him with a pass right between the free throw line and the restricted area. Marc Gasol is late to the rim, and Leonard elevates and then shifts away from Gasol’s momentum to finish with his left hand.

Gasol isn’t late by accident. While Kawhi, Lee and Parker are setting up the cut, Aldridge and Mills run a decoy screen for Patty away from the basket. Andrew Harrison is completely glued to Patty and although Marc quickly senses this is a lure, this action forces him a couple steps away from the ideal help position. It’s enough for Leonard to receive the pass and have room to time his finish.

The Grizzlies had been matching the Spurs shot for shot until this play happened, leading to Patty Mills going nuclear from three. The main difference from Game 4 was that guys other than Kawhi, namely Mills, made shots and they weren’t forced into make-or-break defensive possessions. With Parker initiating and Mills shooting, it allows Kawhi to move without the basketball.

This unlikely group now has a +58.8 net rating in 12 playoff minutes. They’ve been elite on offense at 177.2 (the higher the better) and rough on defense at 118.4 (the lower the better). Moving forward, if the games gets tighter with under three minutes, hopefully, unlike Saturday in Game 4, there are offense/defense substitutions in crucial moments. But for now, it looks like Pop has found a group he trusts.