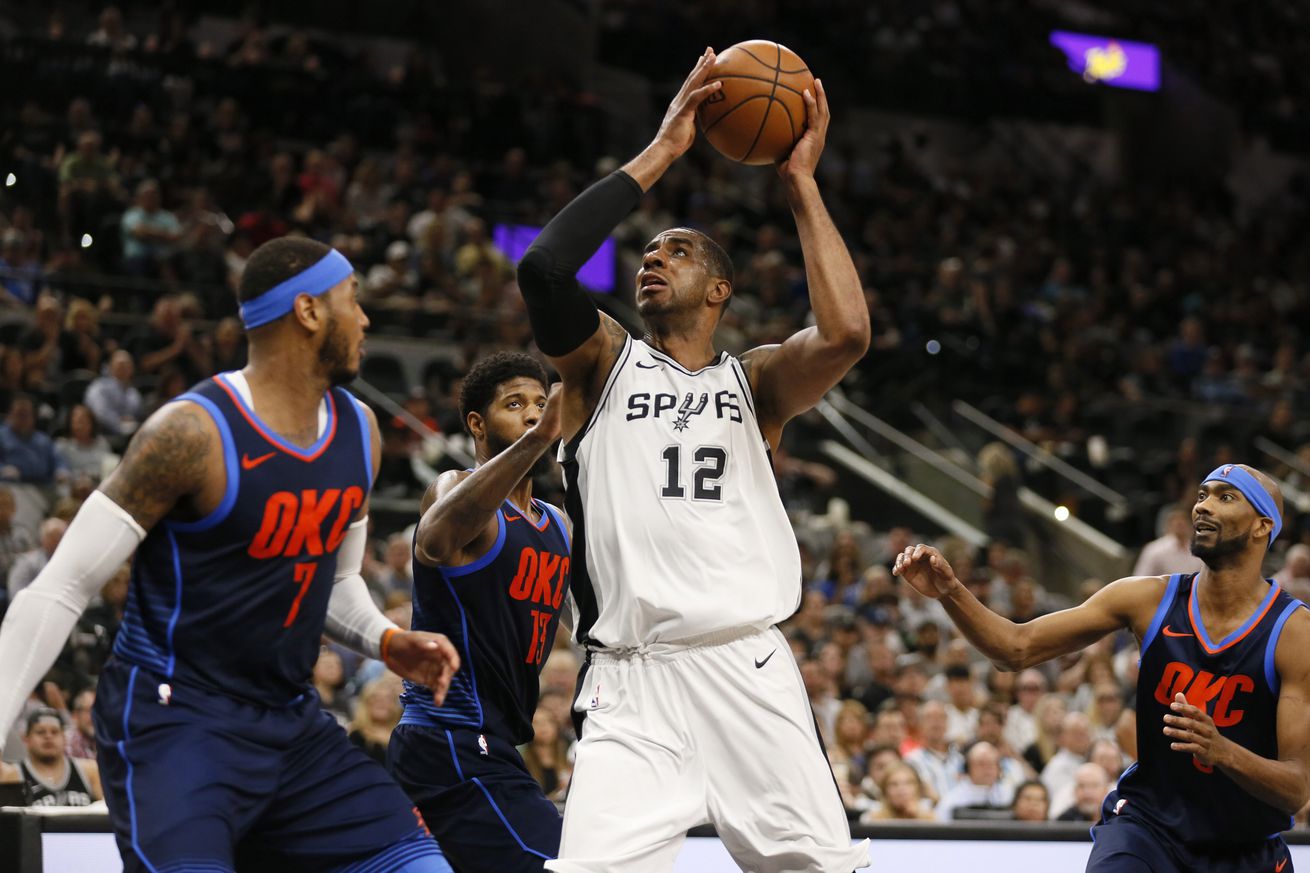 Good defense and a boost of confidence got the Spurs a crucial win at home against OKC.

If you like ugly basketball, then this was the game for you. Poor shooting? Check. Long scoring droughts? Check. Turnovers? Check. However, all it takes is a win to make things pretty again, and the Spurs pulled out a huge one tonight against one of the many teams they’re jockeying with for playoff positioning: the Oklahoma City Thunder.

The biggest sigh of relief came right before the game started when it was announced that LaMarcus Aldridge would play tonight after suffering a knee contusion in Washington. If you still wonder how important he is to the Spurs not just statistically, but what his presence means as well, here’s what Manu Ginobili had to say about seeing him start:

“I didn’t even want to know if he was playing or not. I was like this (covers ears). Once I saw (Pop) put him in the first play, I was like ‘Whew!’ At this point, playing without him is almost like handing them the win.”

With that cloud of uncertainty that had been looming over their heads lifted, the Spurs came in and played with a sense of determination that had been lacking in their previous two games on the road.

However, if it was obvious already that this wasn’t going to be easy against the scrappy Thunder regardless of who played, the Good Guys learned soon enough. With Pau Gasol back in starting line-up in place of Danny Green, presumably as a means to draw Steven Adams away Aldridge, the Spurs started decently enough but fell behind as the quarter wore on. They found themselves down 29-24 heading into the second on the back of 6 turnovers and only hitting 7 of 21 from the field.

In a move that many have been clamoring for, Davis Bertans got the tenth man’s minutes over Bryn Forbes, and the Spurs started the second quarter on a quick 7-0 run, forcing a Billy Donovan timeout after just one minute. They would extend that run to 14-2, and the Spurs appeared to be in a good place as they built a comfortable 49-39 lead with just under 4:30 left in the half.

However, as they have been prone to do, the Spurs relaxed a little once they had some breathing room, and the sloppy ball returned. The Thunder managed to cut their lead down to 59-56 at the half largely thanks to an 18-11 advantage in points off turnovers. The Spurs were actually lucky it wasn’t tied after Rudy Gay threw the final inbounds pass right to Russell Westbrook, who bounced his three off the rim.

Fortunately for the Spurs, that would be the closest the reigning MVP would get to hitting a big shot, and a lot of that was thanks to the defense of Dejounte Murray. Although his other numbers were solid (7 points, 8 rebounds, 7 assists), his five steals stood out as he harassed Westbrook all over the court and didn’t allow him his usual drives to the rim. Overall, Westbrook was held to a modest (for him) 19 points, 11 rebounds and 5 assists. As Pop would say after the game:

“This was Dejounte’s best game as a pro.”

It was a good thing the Spurs had their defense going, because the third quarter got off to another sloppy start for both sides with plenty of poor ball-handling and both teams being too content chucking up threes. In the middle of the quarter the Spurs missed nine straight shots to spot the Thunder a 71-66 lead, but fortunately a familiar face was there for the rescue. Two threes by Manu Ginobili and one by Gay kept things close, and the Spurs entered the final frame only down 81-77.

The hot shooting carried over as Green opened the fourth quarter with a three, and the Spurs quickly regained the lead while also getting in the bonus early. Back-to-back threes by Patty Mills and Bertans gave the Spurs a 94-87 lead with 4 minutes left, and that would prove to be just enough for them to hold on despite holding OKC to just 6-21 shooting in the quarter.

Paul George hit three crucial free throws after Adams hip-checked Murray into him on a three attempt to cut the lead to one with just a minute left. Aldridge respond with a driving dunk around Adams, and Westbrook went full Westbrook-mode by launching an air-ball three instead of passing it off to the hotter hands of George or Carmelo Anthony.

Mills and Ginobili hit their free throws, sandwiched around a George three, and the Spurs got the vital 103-99 win to tie series 2-2 and move up to fourth in the standings (for now). It was a game that felt very ominous coming in, making this one of the sweetest — and most important — victories of the season.

Aldridge came into shoot-around this morning uncertain if he would be able to play.

“I was pretty iffy, and then I did some things this morning, and so I said ‘Why not?’”

Some may see the word “contusion” and scoff, but I can tell you from very recent experience (like, two weeks ago) that a bone bruise is no laughing matter. I bruised the fifth metacarpal on my left foot, and for a while I could barely walk. However, after some ice and elevation it was like nothing was wrong 24 hours later. That’s probably similar to what Aldridge was feeling and why he looked fine tonight even without a wrap or brace on his knee.

With two steals in the first half, Ginobili surpassed David Robinson for the most steals in franchise history (1389). Here’s what he had to say about it:

Naturally there was a lot of discussion on TNT about the ongoing situation between Kawhi Leonard and the Spurs, There are plenty of reasons to speculate about what’s actually going on, but the one I found most difficult to believe came from sideline reporter David Aldridge during the first quarter, and that was that the Spurs may not see Leonard, even at his best, as capable of leading them to championships and they are ready to find another franchise player.

That is something I just cannot buy. It’s one thing to think that something is so off about his injury that he will never be the player he was before, or that there really are irreconcilable differences, but the idea that he’s simply not a good enough player makes zero sense. Not only is he a Finals MVP, but he showed last year what heights he can lead an otherwise average team to, and at his best he’s arguably a top three player in the league. The argument that he’s simply not good enough doesn’t hold much water. It won’t be that easy to replace him, and the Spurs know it.

For the Thunder fans’ perspective, visit Welcome to Loud City.

The Spurs return to the AT&T Center on Sunday to take on the league-leading Houston Rockets. Tip-off will be at 2:30 PM CT on ABC.