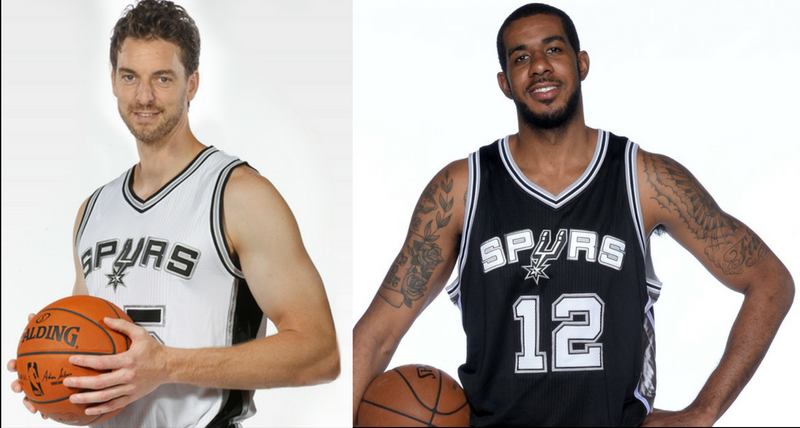 If you try to rewind your mind back to the second round of the 2016 NBA Playoffs between the San Antonio Spurs and Oklahoma City Thunder, you might recall that some of the Thunder bigs in Steven Adams, Serge Ibaka and Enes Kanter would back off of Tim Duncan when the Spurs were in the halfcourt offense, as the furthest out Duncan usually went on offense was near the free throw or mid-range area. In the latter portion of his career, the mid-range jumper wasn’t a shot Duncan usually took very aggressively, so, defenses like the Thunder backed off Duncan to provide more help defense in either stopping penetration to the paint, or they were able to help more often when Kawhi Leonard or LaMarcus Aldridge were trying to post-up their defender in the low block.

With the addition of Pau Gasol, not only will Gasol not hesitate to shoot an open mid-range jumper, but, he will also be able to provide the Spurs’ offense with more spacing because of his ability to shoot from 3-point range, if the shot is needed on a possession.

Last season with the Chicago Bulls, Gasol took 69 three point attempts (1.0 per game) in 72 games for the Bulls, and he almost shot near league average by making 34.8% of his attempts. While Gasol wasn’t a high-volume 3-point shooter in Chicago’s offense, he did show that if the shot needs to be taken and he’s standing there from the outside as the recipient of an open pass, he won’t hesitate to shoot from long range.

In his first season as a Spur, Aldridge wasn’t looking to take many, if not any three pointers with San Antonio, as he only attempted 16 threes through his 74 games in the regular season with the Spurs in year one. Aldridge’s reluctance to take threes in year one was more-so because he was just trying to find his comfortable mid-range and low-block shots first in a new system, and with new teammates.

On Monday at media day, Aldridge was asked if he’ll shoot more this season from three like he did in his last season with the Portland Trail Blazers, and for Aldridge, now that he’s comfortable with the Spurs’ system, he’s indeed looking to shoot more three pointers.

“I do,” said Aldridge about taking more threes this coming season. “I mean, last year was a big learning year for me, as far as getting comfortable, as far as trying to find my role on the team, trying to learn where my shots were going to come from, so I feel like this season, I’m going to know more. I’m already going to know all of my spots where I’m going to get shots from, so I’ll see if I take more threes this year.”

When asked if three pointers were an area of focus for him this past summer, Aldridge had this to say: “Yes and no. Yes, because I wanted to get back comfortable with it, like I was my last year in Portland, but then also I wanted to keep getting more comfortable with my shots here, as far being at the elbow and being on different blocks.”

In his last season with the Blazers during the 2015 season, Aldridge did seem comfortable with his outside shot, as he took 105 threes in 71 games with Portland, while shooting near league average at 35.2% from beyond the arc…..Read More