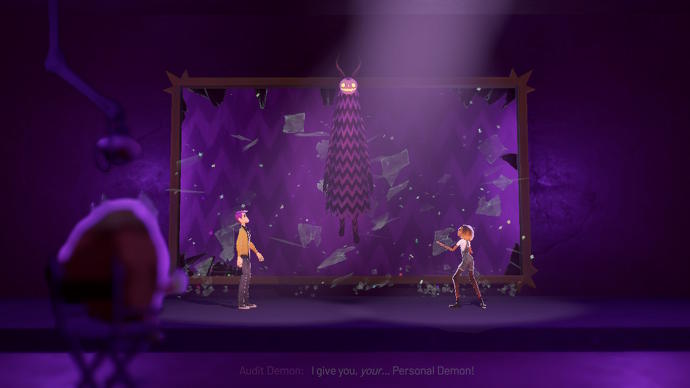 Despite enjoying it during my initial review, I never connected to Afterparty in the same way as its predecessor Oxenfree, one of my favourite games. Both are narrative-focused – you walk two characters from A to B and pick dialogue options, some of these options will change the course the story takes. Your protagonists are young people with a very natural way of speaking – they mumble and interrupt each other should you so choose, sigh loud and use “like”, like… you know.

I think I never liked Afterparty as much as Oxenfree because it’s a less hopeful continuation of the same problems – Oxenfree ends at a point where Alex can choose to go to college in a different state and start over, whereas Milo and Lola spend college just as miserable as before. They aren’t nice to each other. They may in fact be very tired of each other and ready to explore something new, but they’re also scared of letting go.

Both games try to make a point about autonomy, about their protagonists never really being their own people, not only because they’re literally being controlled by you. Alex is trying to move on from a traumatic experience in her life and needs physical distance for that, and Lola wants to move town after college, which frightens Milo enough to sabotage even a tentative attempt to do so. Alex in Oxenfree by contrast is much more of a video game hero protagonist, as she has the power to alter reality and undo the source of her trauma. What actually happened on Edward’s Island, what happened to her brother before that, will be a thing only she remembers. I liked that option better, because what I want when thinking about traumatic experiences is a do-over. As Cher puts it: “If I could turn back time”.

Through Milo and Lola’s personal demon, you see the past hurt that’s led to both of them developing low self-esteem. For Lola, it was her parents’ divorce and her fear of not turning out as successful and well-adjusted as her sisters, who attained all traditional forms of achievement – marriage, money, beauty. Milo suffers from the difficulties of being a second-generation immigrant – the high expectations of his father, his name that inevitably brands him as different. Their personal demon digs up these hurts to use against them, and eventually she succeeds, because after showing Milo and Lola all the relationships that traditionally should work for them, she shows both of them that the family they made in each other instead is also crumbling.

For Milo and Lola, and for most of us, the only way is forward. Afterparty suggests both landed in Hell simply because they didn’t live their lives to the best of their ability, and over time just let resentment and fear get the best of themselves. The idea behind this is simple – Living in fear isn’t really life at all. If you just live life trading favours, you don’t give and receive real kindness. It’s literally a hell of your own making. The fact that they can do nothing but talk, dance and drink may not make for riveting gameplay, but it’s very close to the truth of what being in the actual situation is like. In order to get what they need, however, Milo and Lola have to pick between sticking to their values or becoming their worst selves – Lola can condemn an innocent prisoner even though she values justice, and Milo can lose his conscience. They still behave like undefeatable video game heroes. That’s what we do in games – make whatever decision we need to in order to get the job done, because the alternative is to give up and stop playing, something Afterparty openly acknowledges.

Sometimes, however, it’s best to just stop playing. To achieve something at any cost isn’t necessarily a win, and to let go may be the better option. This is a path you can take in the game in order to help Satan, but there is no ending that acknowledges the work Milo and Lola could have done on themselves. They seem perpetually stuck with the next best thing. They don’t seem to be in tune with what they want. Milo in particular seems to never have developed past being a sidekick. The best thing for both could have been to let go of each other. They’re not particularly nice to each other over the course of the game, and judging by the story you uncover, haven’t been for a long time. But they’re both scared, because this is what they’re used to. They haven’t been friends with anyone else in years. Wormhorn offers up the most telling thing about their relationship pretty early on in the game: “I know who of you hates the other almost as much as they hate themselves.” At least one of them stuck with someone they dislike because being all by themselves was even worse.

I think all endings are somewhat unsatisfying because Afterparty’s premise is set up in a way that would ultimately make any ending feel somewhat uncertain. That, just like all things that supposedly made Milo and Lola land in Hell, is just life. You’re not either the winner or the loser, and for a game, that’s a difficult note to end on. After all, we don’t like to ponder whether the fairytale prince and princess got a divorce later on, either. (Actually, Telltale’s The Wolf Among Us and the comic book it’s based on do just that, but that’s beside the point.) We want our endings to be neat, or as neat as possible, and Afterparty gives no quarter in that regard.

In fact, the supposed “good ending”, the ending where you win and get to go home immediately, is likely the worst option. It leads Lola to pondering if her real friends have been in Hell all along, which sounds like another mistake, seeing as the game plays out over a single night. Both Hell and earth suck in their particular ways, it seems, and here is where the lesson comes around full circle – Hell is what you make of it, and in neither version Milo and Lola seem to be ready to make that decision and be their own person quite yet.