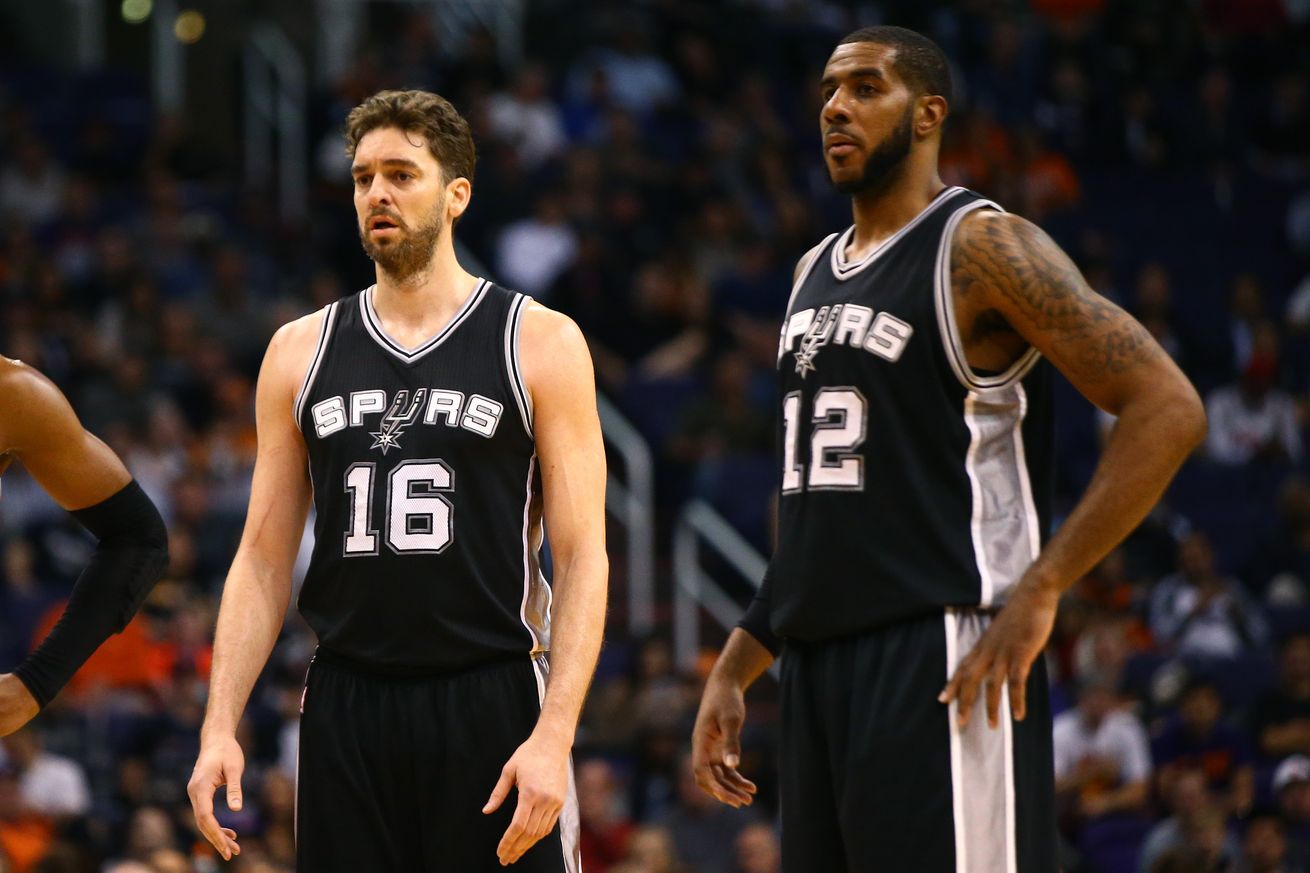 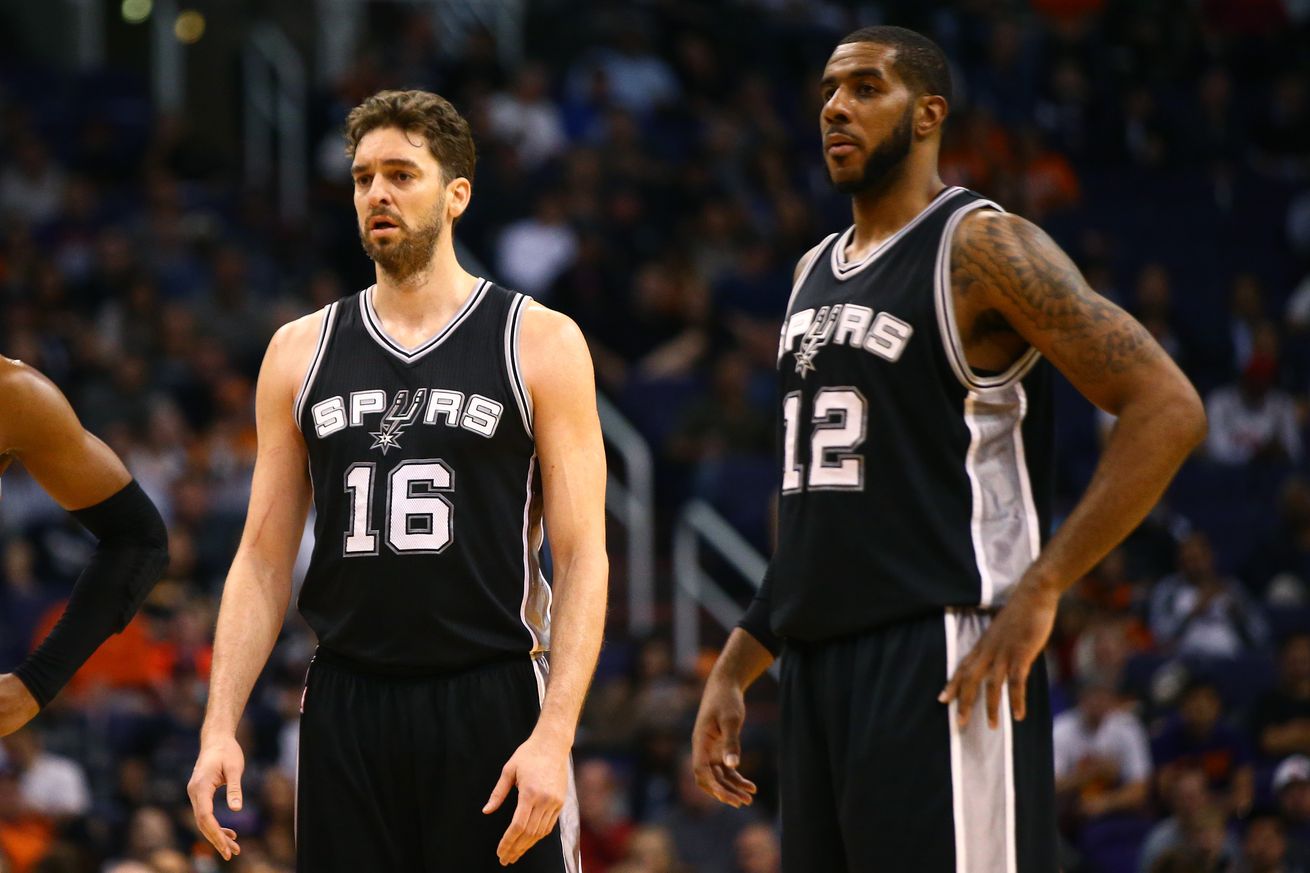 For anyone who has ever talked with someone who’s griped about the contract of Tony Parker, LaMarcus Aldridge, Pau Gasol…

Well, Thursday was certainly an eyebrow-raising day for fans of silver-and-black sports teams. One organization announced a move to Las Vegas, while another declared, in their own, understated way, why it’d be a sin to bet against them in the playoffs with an absolute drubbing of the defending champion Cleveland Cavaliers. Indeed the 2016-17 season has taken some interesting twists and turns for the Spurs, who are still battling for home-court advantage despite the retirement of the best player in franchise history during the off-season. (Tim Duncan joked he’s rooting against them during his tour-de-force guest appearance on Richard Jefferson and Channing Frye’s “Road Trippin’” podcast.)

The ironic thing about the Spurs is that despite their glossy 57-16 record, some feel that they’re not getting the bang for their buck with most of their higher-earning players. LaMarcus Aldridge certainly hasn’t been a “bust” free-agent signing, but he’s the Spurs’ highest-paid player and has mostly performed at a fringe All-Star level. Even with his recent uptick, he’s averaging just 17.6 points and 7.5 rebounds while shooting 47.4 percent from the floor.

Pau Gasol was San Antonio’s big splash this past off-season, and even though he’s had a bit of an offensive renaissance thanks to his newfound marksmanship from downtown, he’s also been relegated to a reserve role and is generally thought of as someone who’ll be practically unplayable against the Rockets and Warriors in the playoffs. Then there’s the old hands on the roster, Tony Parker and Manu Ginobili. They’re making nearly $30 million combined, neither can play more than 20 minutes a night consistently and they’ve both struggled to string good games together. Heck some fans out there even think that Danny Green, who had perhaps the greatest 1-of-7 shooting night of any two-guard in NBA history against the Cavs, isn’t living up to his eight-figure salary.

When I look at the Spurs salary table, courtesy of Spotrac.com, San Antonio doesn’t immediately look like a particularly intelligent organization. They’ve gotten great value from Patty Mills, Dewayne Dedmon, David Lee and Jonathon Simmons, but not enough to offset how overpaid the veterans are relative to their performance, right? There’s quite literally a price to pay for the organizational philosophy of being loyal to the “Big Three” in their golden years that separates the Spurs from teams like, say, the New England Patriots, where Bill Belichick has shown loyalty to no one but the ageless Tom Brady, but even still Aldridge and Gasol’s contracts don’t strike you, in retrospect, as something that the “smartest front office in the NBA” would do.

I wanted to see if this view had merit, so I looked up the contracts of every guy making at least $10 million in the league, to see how they were producing relative to their paychecks. I wanted to cover all the bases in terms of efficiency, two-way usefulness and minutes on the floor, so I decided to use PER, Win Shares, Win Shares-per-48 Minutes, Real Adjusted Plus-Minus and Real Adjusted Plus-Minus Wins. To balance out the five values into something that would be a relatively equal scale: I multiplied the WS48 numbers by 50 (so “.200” would = “10”) and divided PER by two (so “20” would = “10.” Then I added the five numbers together to produce a sum that gives us a fair evaluation of how a player’s season has gone. While much of the results were predictable, in some cases the numbers were nothing short of astounding.

I think a straightforward way to interpret the scale is anything over 50 is an MVP candidate, 45-49 are difference-making alpha-dogs, 40-44 are surefire All-Stars, 30-39 are fringe All-Stars, 20-29 are solid, productive players, 10-19 are role guys at best and anything below 10 is “Danger Will Robinson” territory. The problem, as you can see, is that many of the guys aren’t being paid where they should be. The Celtics and Raptors aren’t quite getting “max contract” value out of Al Horford or DeMar DeRozan (for entirely different reasons, of course) and teams like the Lakers, Knicks and Mavericks are getting negligible results for the money they’re shilling out to their stars, which the standings reflect.

Focusing on the Spurs (highlighted in bold for convenience) there are certainly some surprises with them, aren’t there? Yes, Parker, who’s been limited to just 55 games due to various injuries and has often looked like a shell of his former superstar self, is overpaid, but not by as much as I expected. He’s got the 60th-highest paycheck but his production ranks 81st of the guys earning eight figures. The 81st-highest salary, represented by Charlotte’s Marvin Williams, is $12,250,000. So by my scale, The Wee Frenchman is only making about two million more than he should be, if we’re just judging pay by this season’s production. Then there’s Aldridge, who’s 27th in salary but 37th in production here. The 37th-highest salary happens to belong to Detroit’s Tobias Harris, who’s earning $17,200,000. So Aldridge is being overpaid by nearly $3.4 million.

What’s surprising is those two examples are the only ones that exist on the Spurs. Ginobili, enjoying a make-good $14 million salary in his swan song season, has still been worth the money, even in his limited role. That’s how valuable his defense and three-point shooting off the bench have been. He’s actually outperforming his contract by a million or so. Since Ginobili has been dramatically underpaid for so many years, now that he’s actually adequately compensated, it seems like he’s stealing money.

Gasol’s case is even a bigger surprise. He’s actually outperformed Aldridge this season, even though he’s missed a month with a broken finger. The move to the bench has rejuvenated him offensively, to the degree he would be a top Sixth Man of the Year candidate if he’d been there all season. His defense isn’t good, but it’s not reprehensibly bad as we’ve been led to believe. Gasol’s got the 53rd-highest salary, at $15.5 million, but has been the 30th-most productive guy in the league by this formula. He’s been underpaid by $3.2 million.

Now let’s look at the relative youngsters on the wing. Green, as you may have guessed, has been an absolute bargain at $10 million per season. He’s actually worth $14 million. He’s one of the best defenders in the league and still shooting 38.3 percent from three, even with his slump. People complaining about him are annoying and need to go away. But the real eye-popper is Leonard, who’s in year two of a 5-year extension he signed in the summer of 2015. He’s the 35th-highest paid player in the league, at $17.6 million, and still earning only two-thirds of what he should be.

Add ‘em all up and the top six earners on the Spurs are on the books for $92 million and change ($92,158,381 to be specific). They’ve produced at $103,775,463 worth of value though, meaning even with their loyalty and largesse, the Spurs are in the black with their top half-dozen dudes. No, they’re not getting nearly the same bang for their buck the Warriors are, but the bill will come due for Stephen Curry this summer, Kevin Durant’s going to get a hefty raise too and Klay Thompson and Draymond Green’s deals will be up in 2019 and 2020, respectively.

Curry’s been the most underpaid guy in the league for years, but that’s not the case anymore. No one on the list is.

The rankings are where they would be if they were placed on the original table. Gobert and Antetokounmpo are making peanuts and producing like superduperstars. They’ve both agreed to massive extensions that will kick in next season, as have a few others on this list. Jokic will be the most underpaid guy next year, for Denver. He’s still two years away from his extension. Ditto Towns with Minnesota. What’s instructive of this list is that Mills has performed like the 43rd-most valuable player in the league, and that salary is $17 million, which should give you an idea of the type of contract he’ll be looking to land this summer as a free agent. He’s not a Jokic-level heist, but not that far off, and we’re lucky to have him for at least a bit longer.

It just goes to show you even when the Spurs seem antiquated, sentimental and dumb they’ve got a ways to go before we start comparing them to the Knicks or the Jacksonville Jaguars. Also, they’re not threatening to relocate, so they’ve got that going for them.