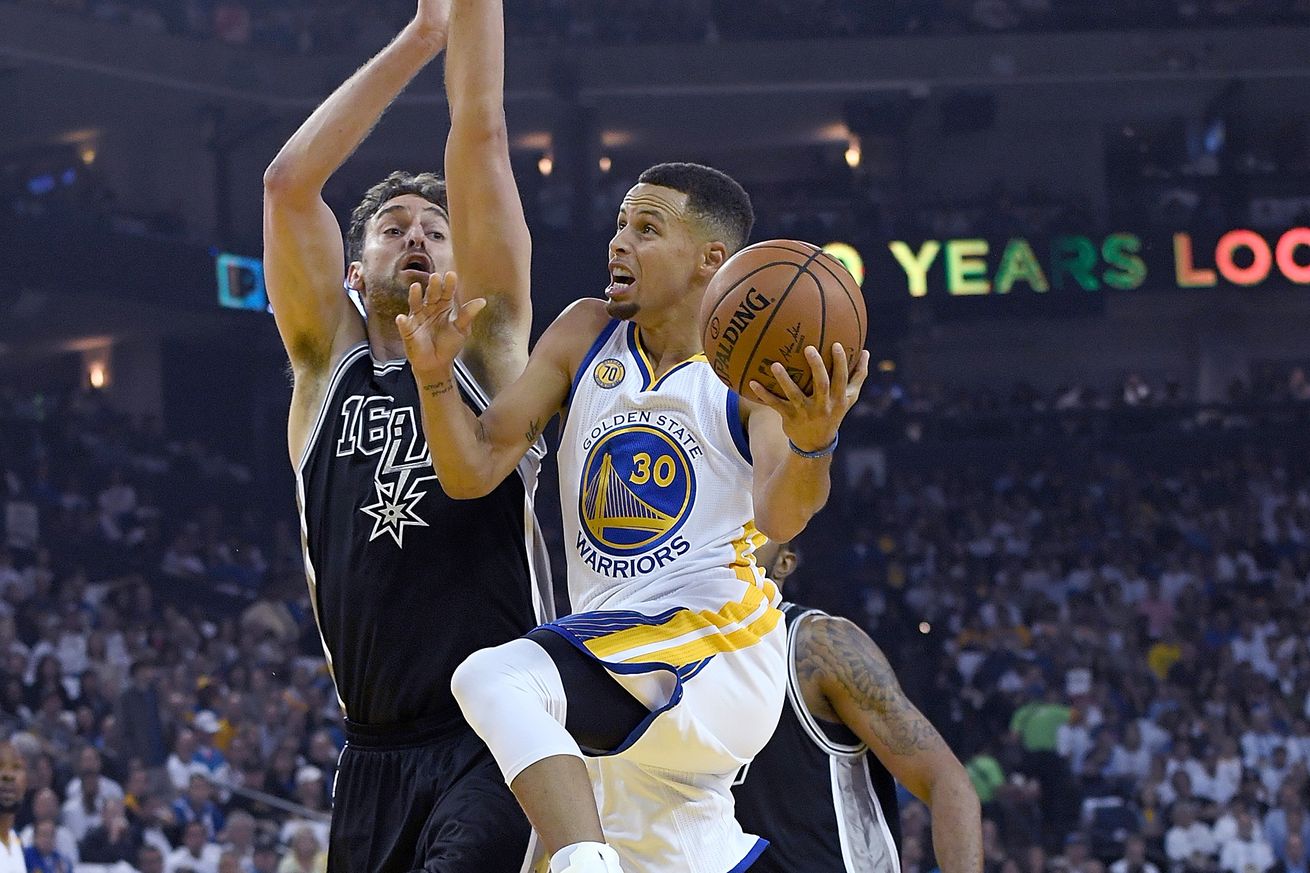 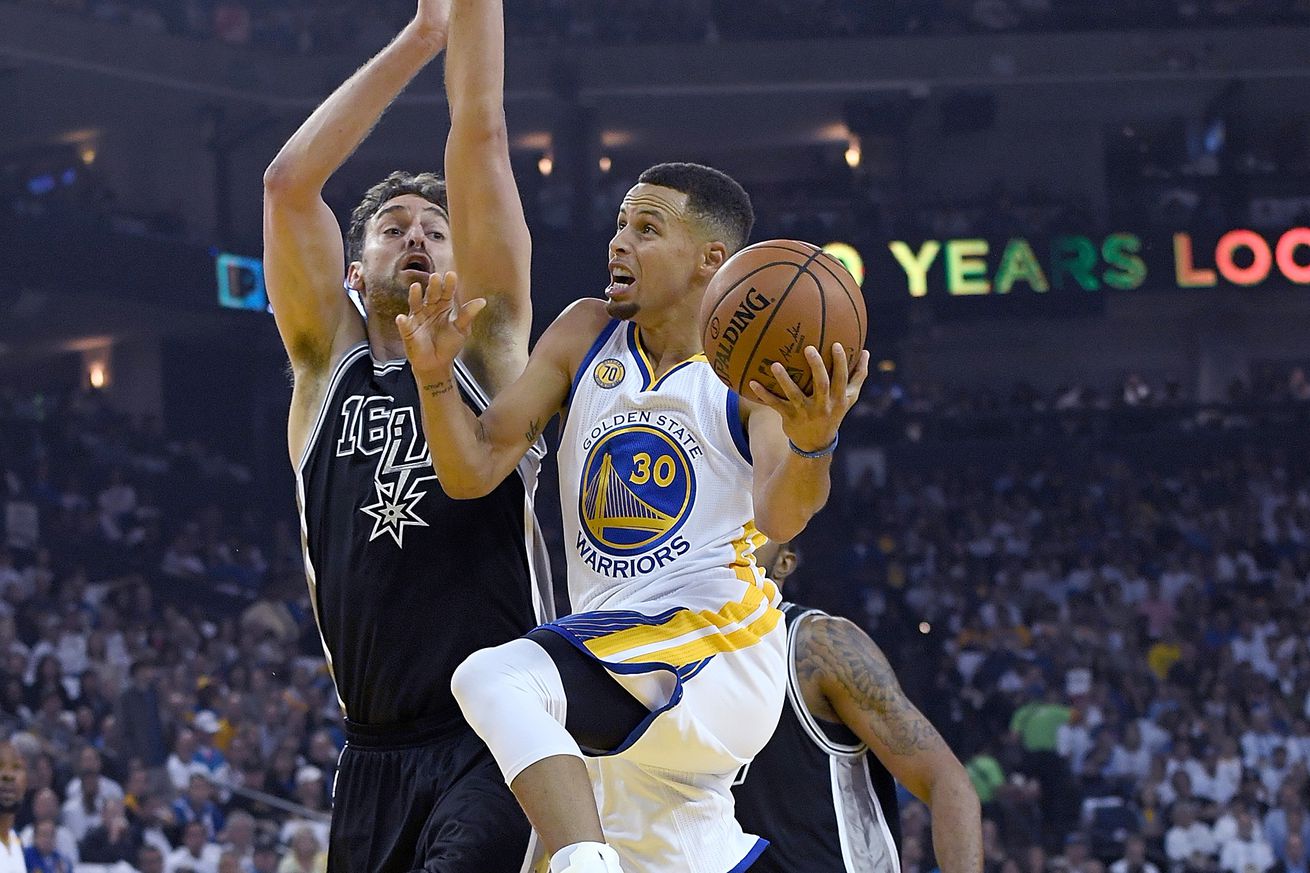 Our resident coach has connected with his friends and former players to take a look at the upcoming GSW @ SAS game.

With the Spurs’ recently deceased hot streak, and the Durant-less Warriors struggling, the fait accompli first place finish in the West for the Warriors is becoming less fait every day. (Except for Thursday’s OKC game, of course, when the Spurs did not accompli much good.) As a result of the Warriors recent losses, the Saturday night game between the Spurs and Warriors could be much more that a look at a possible Western Conference Finals match-up. Instead, it might help determine where those games are played if both teams get there.

Just as Spurs fans have their strongly held opinions about the Spurs, so do Warrior fans. To get a little insight from the other side on the state of the Warriors, , I reached out to several friends of mine (before the OKC game) who are staunch Warriors fans and knowledgeable about basketball in general, with the following inquiry:

So, the Spurs had a crazy start to March with a Kawhi buzzer beater against Indiana, two overtime wins against the Pelicans and T-Wolves, and two incredible comebacks against the Rockets and the Kings. Meanwhile, the Warriors seem to have decided that having three All-Stars is not enough to win any more games.

Thoughts on the Ws? Who is the better team right now?

Here are a few of their lightly edited responses:

First I went to my ex-player, former All-American Chris Greene. Chris grew up in the Bay Area and is a life-long W fan:

Without KD, we are back to watching Draymond miss open 3’s. Klay and Steph are prone to just go cold as they did in 2H last night against Celtics team which plays good D. Announcers were stressing how tough it is to come off a long road trip and play well first game back but meh, don’t buy it. KD has also been tough defender and Kelly Olynk was player of game last night. Kelly f’ing Olynk.

Steph is not playing MVP basketball these days.

Hard to call Warriors best team in NBA with $26 million in payroll missing. Spurs looking better at 8-1 to win championship.

Next I asked Fergus Intemann, former member of the Irish National team, and also a Bay Area native:

Spurs hands down. Barnes pickup was absolutely terrible. Zaza has not filled half the shadow of Bogut. Without KD, our severely middle-of-road bench depth is wilting in the spotlight.

Next I went to my college roommate Corey Levens. Corey grew up near Chicago, so was a big Bulls fan, and was well-positioned to enjoy the MJ/Pippin/Jackson years. He moved to the Bay Area 20 years ago, slowly switched allegiance to the Warriors, recognized that Mark Jackson was choking the life out of the team, and went full-on fandom once Steve Kerr came aboard. Corey’s comments:

The Dubs were off even before Durant got hurt; the All-Star break did not help them.

Before the break, they were great. The difference is that before KD got hurt, you knew they would fix it and, when they did, would go back to blowing people out. That Warriors team is one of the greatest ever. But, since then, Green’s passing has been off (in fact, the whole team’s passing has been mediocre), and the three-point shooting of Thompson and Curry has been inexplicable. Without Durant, they still have not found themselves, they don’t know who’s going to score (it seems to me that without KD teams have really stepped up the defense on Curry and Thompson, and the holding going on with Curry is just plain obscene) or even look to score.

Watching Curry is getting painful; he’s trying so hard to make things happen, and it’s just not happening; his drives to the basket are forced, no one is cutting giving him an escape valve when he gets double-teamed underneath, and his passing has been abysmal. He makes some of the best passes you’ll ever see; but he also throws the laziest, most careless passes you’ll ever see, too (see game 7). And, last but not least, the Dubs made it very hard to root for them (i.e., hard for me) by picking up uber-shithead Matt Barnes. Can’t stand that guy. Notwithstanding the public, complimentary comments the Dubs are making about him, I get the feeling they already regret having him.

So, for Saturday’s game, I couldn’t begin to predict who’ll win, but I give the edge to the Spurs. The Dubs will figure it out soon, though, and even without KD will get back almost to where they were. Whether that will be in time to keep home court advantage is questionable. Then when KD comes back, there will be another readjustment period, but I think that will go fast; whether it will be fast enough to win the championship will make it fun to watch.

I’m stating the obvious, but the body language on the Ws has been horrible. The loss of Barbosa and Bogut plus the decline of Iggy make them a dramatically different team than they were the last two years.

With all that being said, IF Durant is healthy in June, I would be surprised if they do not get through the Spurs and make it back to the Finals.

My view: Fans of good teams often accentuate the negatives, and don’t fully appreciate how great their teams are until they look back at it later. See, for instance, Spurs fans stressing about this version of their team. Perhaps proving my point, I don’t expect the Spurs to steal home court advantage, regardless of the outcome Saturday night. While the Spurs have a lot of home games coming up, many are against very good teams – and Pop will likely continue to rest players because he knows that going into playoffs healthy and rested is more important than anything else. Moreover, the Spurs’ hot streak had some serious smoke and mirrors attached. A few different bounces, breaks and bail-outs could have made the Spurs 9 -0 record beginning February 13 into something like 5 – 4, and we would be more worried about holding onto the 2 seed than reaching for the top spot.

That being said, beating up on the Warriors Saturday night would be good for this Spurs fan’s soul.