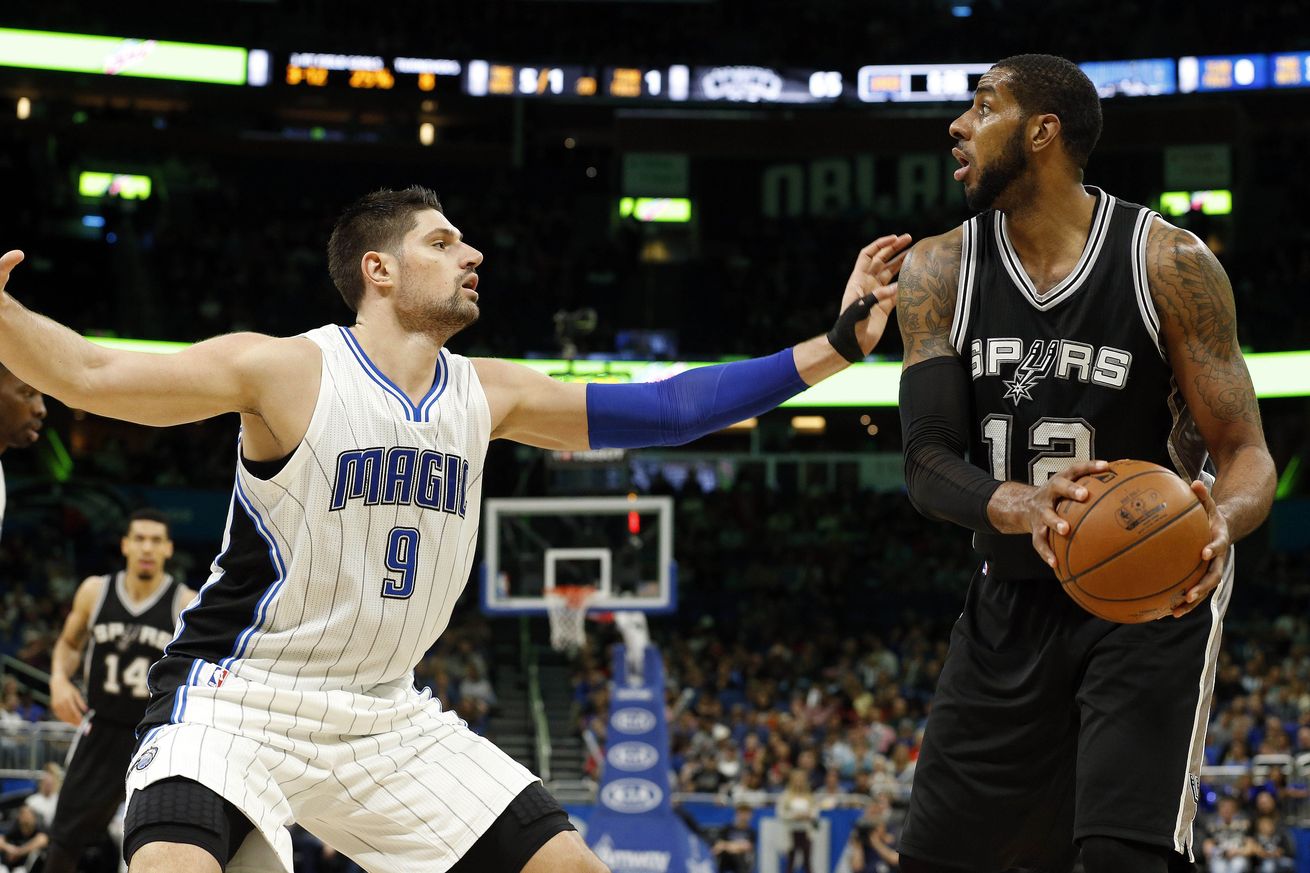 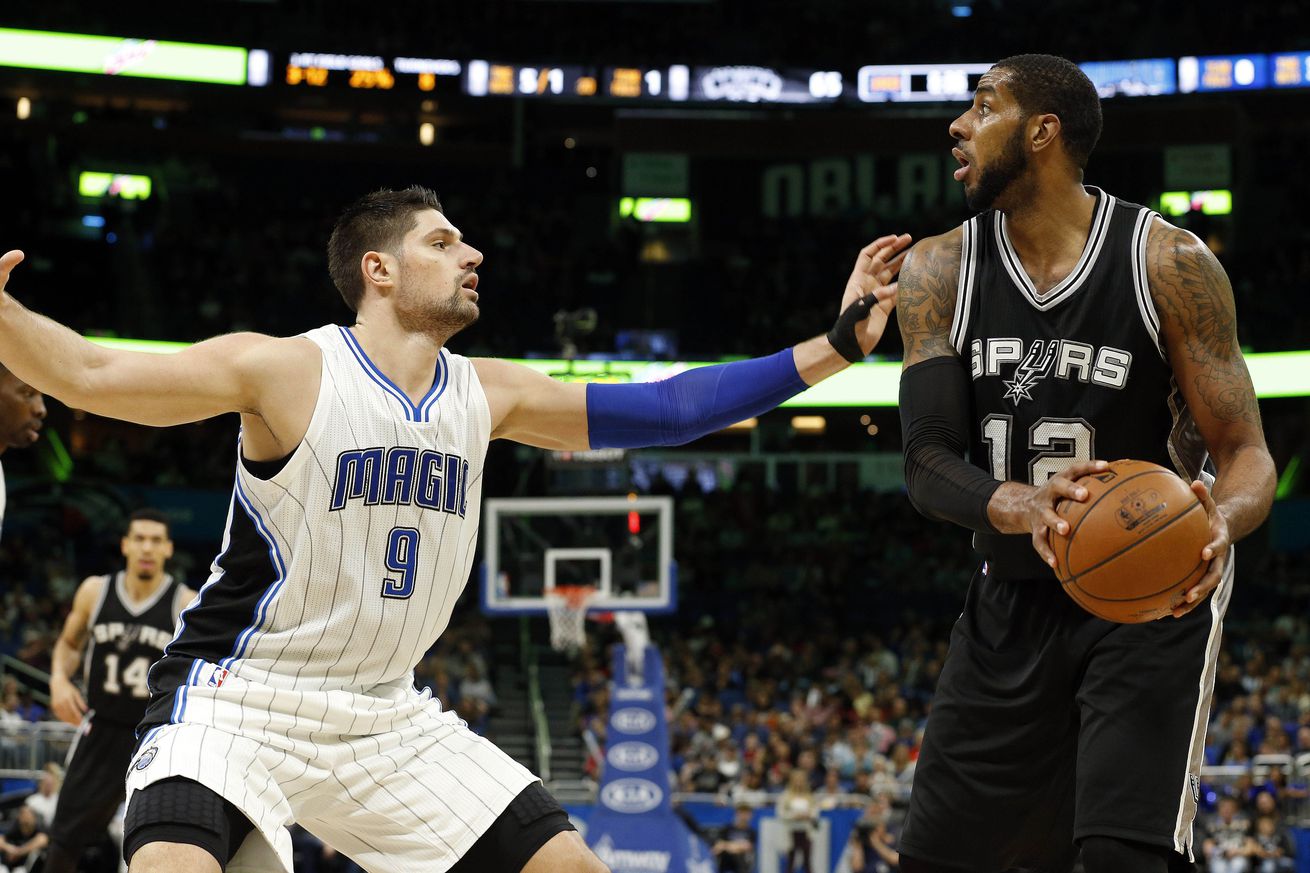 Aldridge and Dedmon each had nights to remember in the last game before the All Star break.

By all accounts, LaMarcus Aldridge needed a break.

His shot was off-kilter, evidenced by his 34.1 field goal percentage in the first five games of the Rodeo Road Trip.

San Antonio was outscored by eight points with Aldridge on the floor in this five-game stretch. While he sat, the Spurs were beating its opponents by 12 points.

Without Aldridge operating at his normal efficiency, Kawhi needed to ascend to the basketball heavens and essentially be Superman in order for the Spurs to compete in games.

But, first, he was the beneficiary of an early All-Star gift. Orlando traded Serge Ibaka to Toronto Tuesday afternoon, meaning he had one less frontcourt player to spar with.

Vogel inserted Jeff Green in the starting lineup to replace Ibaka, creating a tasty matchup for the struggling Aldridge.

He started the game by going to work over the smaller Green, tossing mid-range jumpers that were more reminiscent of the old Aldridge. Orlando switched Nikola Vucevic on to Aldridge, but he wasn’t quick enough to keep up with the rangy 7-footer.

Here, Ibaka was missed because of his long arms and athleticism.

Now this was the break — facing Orlando’s 22nd-ranked defense, without its best interior defender — Aldridge needed to escape from his mini-shooting slump.

It didn’t even matter that Kawhi was scoreless for the first six minutes of the game. Aldridge was locked in, finishing with 23 points in 28 minutes. He only needed 13 field goal attempts, too.

Once the lead was in good hands, Aldridge lobbed the baton to Dewayne Dedmon, playing his former team that had sent him into free agency for Bismack Biyombo (four points and three rebounds last night).

Dedmon added 10 points and 11 rebounds, marking his fifth double-double of the season.

With about eight minutes left in the game, Dedmon twisted the knife a bit deeper. Tony Parker probed the defense with his dribble for a few seconds, before calling for a screen. Dedmon obliged, sticking his large frame into D.J. Augustin’s hip.

Dedmon’s screen created enough space for Parker to duck into the paint, as Augustin worked to recover. Vucevic, defending Dedmon on the play, was out of position too and Mario Hezonja lingered in the weak-side corner for a beat too long. Parker lofted a high-arcing pass to Dedmon, now in a dead sprint to the rim, that he caught almost directly over the basket, and slapped it home for his 27th alley-oop dunk of the season.

Dedmon’s dunk was a crushing reminder for what could have been if Orlando re-signed him and spent its money elsewhere in free agency.

No matter. San Antonio left Orlando, Florida — home of Disney World, known colloquially as the happiest place on Earth — with a win before a much-needed reprieve from basketball.

It’s no Disney World, but the Amway Center proved to be at least the second happiest place on Earth for the Spurs’ frontcourt duo.

Relevant stat: San Antonio is 43-9 over the last two seasons when Aldridge scores at least 20 points in a game.

“He has been stupendous. He runs the floor, he guards, he rebounds, he gives us a lot of energy. He has been absolutely super.”

Manu could thread a haystack through a needle. That doesn’t make any sense, but neither does Manu.

The Magic trick we’re seeing now is the Spurs sawing them in half.

Confirmed: Manu Ginobili has eyes in the back of his head pic.twitter.com/rTqyybe8uL

*Disclaimer: This section is not sponsored by Taco Bell. I’m just a huge fan. It’s in my Twitter bio (@quixem), after all. Direct any negativity towards Taco Bell in the comments below. It’s cool. I don’t mind.

Let’s go with the double stacked tacos — an unimaginative alteration to an old classic. Wednesday’s win was typical Spurs (blowout), but it wasn’t much fun.