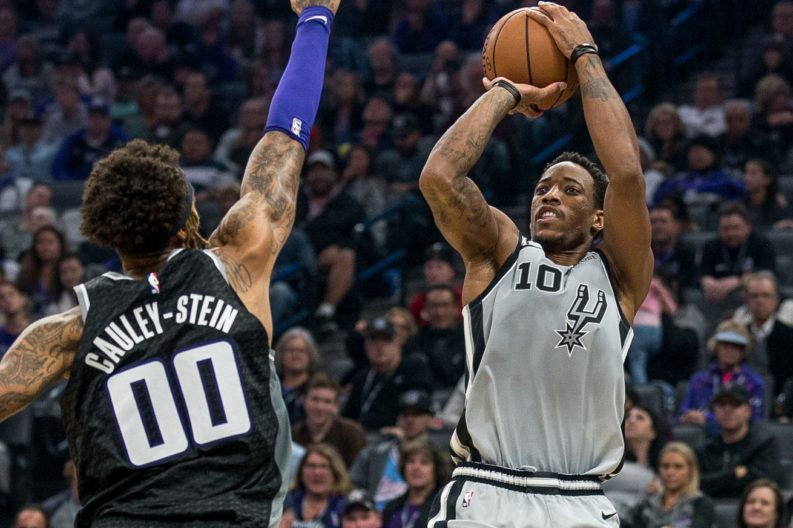 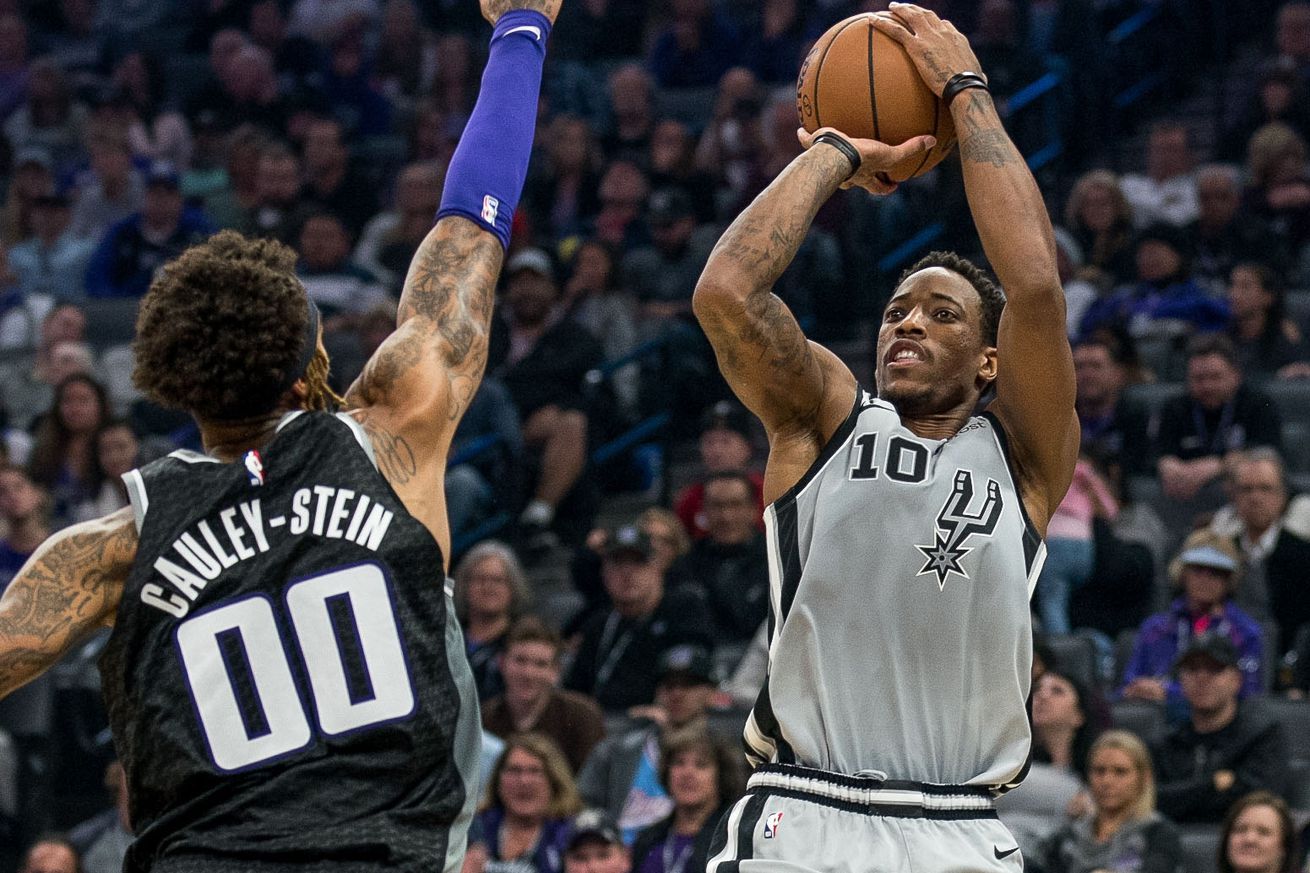 How the Spurs fought back into the game — and then gave it away.

For nearly 3 minutes midway through the 4th quarter of Monday night’s game in Sacramento, the Spurs looked and played like a team set on taking over and closing out like the Spurs of old. Down 6 with 7:30 to go, DeMar DeRozan and LaMarcus Aldridge ran a pick and roll at the top of the key.

Aldridge doesn’t land the pick, but he rolls hard to the rim and seals Harry Giles so low that Derrick White has an open layup off the pump fake and drive. White leaves it just a hair short, but LMA is right there to clean it up and pick up the foul. He hit both foul shots to bring the Spurs within 4.

On the ensuing possession, the Spurs played straight man defense, after spending much of the game switching.

On the weak side, Harry Giles and Nemanja Bjelica set up like they’re setting staggered screens for Buddy Hield to get free at the top of the key, but Buddy cuts in towards the paint after the first screen, putting Dante Cunningham in a difficult position. Cunningham has to get up and around the screen that Giles is now setting for Bjelica without getting in the way of Bryn Forbes as he chases Hield. Cunningham gets it done with some quick footwork and is right behind Bjelica coming over the screen, so the Kings transition immediately to a dribble handoff into a side pick and roll.

White does a great job of sliding under the screen to stay with De’Aaron Fox and cut off penetration, forcing Fox to kick the ball back up top to Bjelica. The movement and potential penetration forces Aldridge to drop low in the paint, so for a moment at least, Giles has deep position on LMA. It doesn’t last long. By the time Bjelica makes the entry pass, Giles is almost out at the foul line.

Hield makes a good cut to the rim, but Forbes stays right on his hip and deflects the ball before grabbing the steal. He takes off in transition and times the pass to DeRozan so the defender can’t quite recover, but DeRozan has enough room to make a play, which he does, cutting the lead to 2. That only lasted for a moment, though, as Willie Cauley-Stein hit a jumper from the free throw line to push the lead back out to 4.

On the Spurs next possession, DeRozan draws a switch, forcing Cauley-Stein to guard him on the perimeter.

With Aldridge in position for a potential rebound down low, DeRozan pulls up for a relatively open 18 footer. He sinks it to pull within 2 again, and the Spurs rush to get back on defense. Sacramento pushed the ball off makes all night, and Fox is almost fast enough on this possession to turn it into a transition play.

Cunningham manages to cut off the ball, and the rest of the Spurs do just enough scrambling to prevent an open 3. Hield drives by White who reaches instead of trying to keep up with his man. Fortunately, Aldridge plays it perfectly down low, and manages to force a pass and still recover into good defensive position on Cauley-Stein. He gets the block, and Hield is unable to save the ball as he goes out of bounds.

The Spurs next offensive possession wasn’t great, but a Derrick White pullup 15 footer isn’t a terrible shot, either. He missed, though, giving the Kings the ball back with a 2 point lead and just under 6 minutes to go.

The Kings try to catch DeRozan with a backpick and a cut to the rim, but he slips around the screen and stays with Iman Shumpert, so Bjeleica kicks the ball back up to Fox for a pick and roll with Cauley-Stein. White and Aldridge snuff this action, too, so Cauley-Stein passes back to Fox with just 5 on the shot clock. White does a good job of moving his feet this time and stays in front of Fox enough to draw the contact and the charge.

LMA catches in the post, waits for the double team, then turns baseline and shoots right over top of both Cauley-Stein and Bjelica. That leaves Cunningham down low in great position for a rebound if he misses, but the ball hits nothing but net, tying the game, and capping the Spurs last good run of the game.

If you’d like to have happy thoughts for the rest of your day, go ahead and stop reading now, because the next minute of game time was rough.

On the very next Kings’ possession, DeRozan dies on a pretty straightforward pick and gives Shumpert a wide open jumper.

Then DeRozan turns the ball over trying to split two defenders, and the Kings get out in transition. Nobody even tries to close out to Fox, who nails the wide open 3.

After the make, and now down by 5 with 4 minutes and some change remaining, the Spurs walk the ball up the court. They run essentially no offense for 10 seconds, then start a pick and roll for DeRozan with 11 to go on the shot clock.

He takes two dribbles and pulls up for a lightly contested 18 footer, with three Kings boxing out Aldridge. Bjelica gets the rebound, jogs down the floor, and walks into an open 3. That bucket pushed the lead back out to 8 and forced Coach Pop to call a timeout to stop the bleeding.

It was as ugly a minute of basketball as the Spurs have played all season. With their defensive limitations, they cannot afford lapses in attention, communication, or hustle, and they had all three in the most important stretch of the game. To be fair, this Kings team is far better than any recent previous iterations. They fought all night long, executed their offense, pushed the pace, and played hard-nosed defense the entire game.

This version of the Spurs isn’t going to beat a team like the Kings playing this poorly, and if they don’t find a way to execute for 48 straight minutes, they’re going to lose a lot of close, winnable games. Not to go all “Any Given Sunday” on you, but their margin for error is so small, a fact that was painfully clear as they failed to close out this game.