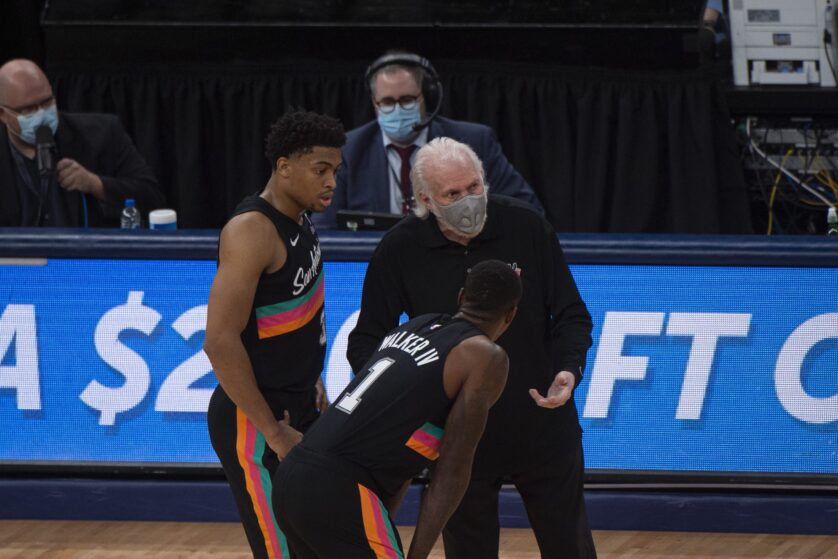 The San Antonio Spurs made one hell of a first impression last night. After a winless preseason, there were some fears that the team would fall flat in their regular-season opener. And through the first bit of play, those fears looked valid. But once the team got rolling it was all good news.

Without being overly hyperbolic, the flow of last night’s game was almost perfect. Gregg Popovich and the veterans did an excellent job of letting the young guys run wild and the young players fed that energy right back into the veterans when they needed a jolt.

The result was a resounding 131-119 road win over the Memphis Grizzlies. That 131 point mark is impressive, especially for an offense that looked stagnant at times last year. The best thing about it was that nothing the Spurs did last night wasn’t repeatable.

They didn’t have one player go off. Everyone was getting involved, they were moving the ball around, playing with pace, and trusting each other to knock down shots. It was truly one of the more fun Spurs games in recent memory.

Frankly, everyone played well. Every San Antonio starter finished well into double figures and two of them got close to recording triple-doubles. The whole team is deserving of a round of applause for their performance last night but the play of these three players stood out more than others.

Dejounte Murray silenced his critics with his play last night

After the team went 0-3 in the preseason there were some pretty heavy criticisms thrown at Dejounte Murray. Hand up, I was fairly critical of his high amount of turnovers and wondered if he was destined to have the ball in his hands as the Spurs lead guard. Credit to DJ, he made me and every other detractor look like an absolute fool last night.

Murray was everywhere. He recorded 21 points, 9 assists, 6 rebounds, and 2 steals and looked completely in control of the game every moment he was on the court. There were the typical Murray moments that we’ve come to expect but he also showed a more advanced feel for the game.

His scoring and defense were on point but it was his passing that stood out most. He was getting everyone involved. It looked like he made a conscious effort to get LaMarcus Aldridge involved when the big fella was having a hard time finding his groove and once that happened Aldridge really started rolling.

The turnovers were still an issue. He led the team with three of them but when he’s posting a 3 to 1 assist to turnover ratio I’m certainly not going to nitpick.

This new, up-tempo style of play benefits DJ almost more than anyone. Let the team get running both ways, reduce the stagnation in halfcourt offense, and watch the wins pour in. If he plays out the rest of the season as well as he did last night the Spurs are going to be in a much better position than we thought a few weeks ago.