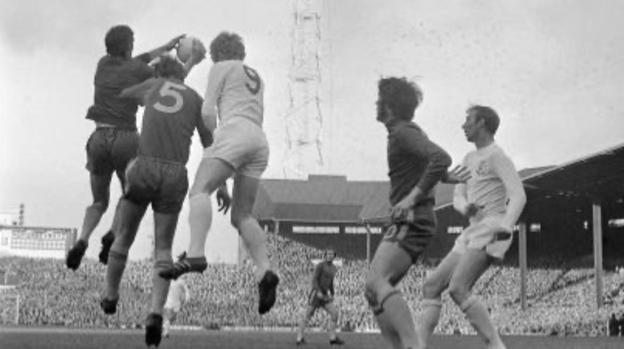 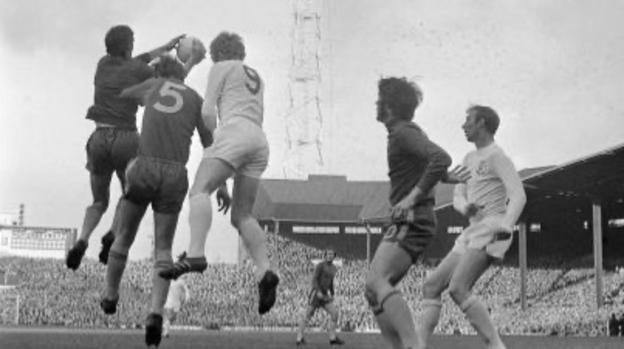 Eddie Gray collects the ball in the centre circle and immediately sets his sights on Chelsea’s goal. But David Webb has other ideas. Fuelled by fresh memories of his roasting at the hands of the Leeds winger a couple of weeks prior, the defender hits him, both feet off the ground, no prisoners. Bang.

It takes all of two minutes for the 1970 FA Cup final replay to live up to its billing as a game best avoided by the faint of heart.

It is a match that has gone down in football folklore as a meeting of pure malice between a defeated Leeds United side renowned for having the muscle to match their magnificence and a victorious Chelsea team with flashiness and ferocity in equal measure.

Football was a very different game half a century ago, when much greater leniency was shown to crunching, full-bloodied tackles and their aftermath. But even by the standards of the time it made for brutal viewing.

Such is its enduring reputation, it has been re-refereed twice since by leading officials according to modern interpretations of the rules. In 1997, David Elleray concluded he would have shown six red cards, while this year Michael Oliver opted for 11.

In the week of the game’s 50th anniversary, in a month that has seen the loss of two of its beloved protagonists – Peter Bonetti and Norman Hunter – BBC Sport looks back at one of the most notorious encounters in English football history.

‘A special sort of animosity’

“Previous”. This is the polite phrase many of the 1970 final’s participants use to explain the history and lasting grievances being carried into the game at Old Trafford.

On a grander scale, Leeds-Chelsea was the north-south divide personified. The Blues were seen as the fashionable southern fancy-dans, who hung out drinking champagne with celebrities on the King’s Road, while the Whites were perceived as the dour, gritty northerners, smoking cigarettes and playing carpet bowls in their working men’s club.

In truth, the two sides were more alike than they would have been willing to admit – both a blend of brute force and brilliance, each driven and on the way up. This perhaps partly accounts for their bitter rivalry.

“The rivalry was there because Leeds had a name, a reputation as being dirty,” said Bonetti, in an interview with the Chelsea website in 2018. “I’d call them physical because dirty doesn’t sound a very nice word. We matched them in the physical side of things because we had our own players who were physical and that was probably why we were such big rivals. We weren’t unalike in the way we played.”

In his autobiography, Leeds midfielder Johnny Giles attests to “a special sort of animosity” between the teams.

“I had that bit of ‘previous’ with Eddie McCreadie,” added Giles. “John Hollins, who would usually mark me, could do a bit. And Ron ‘Chopper’ Harris had made a name for himself.”

Chelsea striker Ian Hutchinson put it more simply: “We hated them and they hated us.”

Leeds still carried lasting scars from their 1967 FA Cup semi-final defeat by the Blues, in which they felt they had a perfectly good Peter Lorimer free-kick ruled out.

In the 1969-70 season alone they faced each other six times, with Leeds winning both league games, including a 5-2 win at Stamford Bridge, and the Blues coming out on top over two games in a League Cup third-round tie.

There were also individual scores to be settled, with one of the freshest that between Webb and Gray. Leeds’ Scottish winger had given the Chelsea full-back an absolute chasing in the drawn final at Wembley that prompted the replay.

The Whites had largely dominated but somehow failed to win on a national stadium surface buried under a mountain of sand, in an attempt to make it playable following poor weather and the ill-advised staging on it of the Horse of the Year Show.

Webb was switched to centre-back for the replay to get him away from Gray and give Harris the task of keeping the winger quiet, but fate drew the two back together almost immediately and gave the Chelsea man a chance to make his mark.

This he did, about halfway up Gray’s left shin.

By 2020 standards, this would have earned Webb a first yellow, according to Oliver. His second would follow 12 minutes later for another late, two-footed lunge, this time on Alan Clarke deep in his own half, and a third in extra time. But back in 1970, Jennings kept his whistle from his lips and cards firmly in his pocket.

Further seemingly clear offences came and went without punishment – Billy Bremner sent spinning from the field by Peter Houseman, Hunter and McCreadie coming to blows, a foot left in by Clarke.

As renowned Observer journalist Hugh McIlvanney wrote afterwards: “At times, it appeared that Mr Jennings would give a free-kick only on production of a death certificate.”

Webb recalled later to the Daily Mail: “Every time he went for his pocket and you thought he was going to book somebody he pulled out his hanky, blew his nose and said, ‘Get on with it, will you?’”

Harris would more or less finish the job on Gray before the first half was out, catching the winger on the back of his left knee, leaving him with an injury that restricted him for the remainder of the game and crucially robbed Leeds of arguably their most talented attacking player.

Ever the hatchet man, Harris would attempt to do the same to Gray’s left-wing colleague Terry Cooper in the second half but succeeded only in tearing right through his shorts.

Years later, Gray was enjoying himself at a black-tie dinner when Harris tapped him on the shoulder, put his hand out and, with a grin, asked: “Can I have my studs back?”

‘Bites Yer Legs’ and ‘The Cat’

If Harris’ reputation preceded him, so too did the man at the heart of the Leeds defence, Norman Hunter.

It would be two more years before the infamous banner that read ‘Norman Bites Yer Legs’ would be held aloft by Leeds fans at the 1972 FA Cup final, but his uncompromising style was well-publicised.

His first touch in the 1970 replay – a throw-in – is conducted to a chorus of boos from the Chelsea fans. His second meaningful involvement would provoke a fiercer response.

After relinquishing possession following a forward run, Hunter and McCreadie come together in midfield, leading to a brief flurry of post-challenge blows between the two.

Later in the game, the Leeds defender is seen prowling following another heavy challenge, fists clenched and ready for battle.

For many, this is the indelible image of Hunter on the pitch, but one that does a huge disservice to a player with silk to match the steel, who won 28 England caps and was part of the 1966 World Cup-winning squad aged 22.

It was certainly not representative of the man – a warm, generous and beloved figure, the death of whom on 17 April was deeply felt not just at Leeds but across the football world.

“I worked with him on the after-dinner circuit,” Harris told the Mail. “On the field he was an animal, but away from the football you won’t meet a nicer fella, a gentleman.”

Just five days prior to Hunter’s death, Chelsea lost one of their own all-time heroes in Bonetti, whose influence over the 240 minutes of the 1970 final is perhaps greater than any other.

His heroics in goal in the first game at Wembley was one of the main reasons for the replay, but even this stellar performance was overshadowed by the fortitude he demonstrated at Old Trafford.

In the 31st minute he suffered a painful knee injury in a fiercely contested aerial duel with Leeds forward Mick Jones – one that required lengthy treatment and prompted BBC commentator Kenneth Wolstenholme to comment: “This almost deserves an X-certificate”. He emerged after half-time heavily strapped and unable to take goal-kicks.

Jones would take advantage almost immediately after the injury by giving Leeds the lead, but Bonetti would have the last laugh, living up to his reputation as ‘The Cat’ by launching off his one good leg to make a string of important saves.

Fittingly, Bonetti – the foundation on which Chelsea’s first Cup final triumph was built and a revered figure in their history – collected the base of the trophy at its presentation.

As the game wore on and the light faded above Old Trafford, the violence taking place on its pitch only increased.

Peter Osgood fouled Jack Charlton, who immediately leapt to his feet and barged the striker to the turf – an immediate act of retribution that the Leeds centre-back usually saved for his infamous little black book of future victims.

It was another attempted act of revenge from Charlton that cost Leeds their lead with the defender leaving Osgood unmarked to score as he went off in search of a Chelsea player who had whacked his thigh moments earlier.

The most brutal moment of all, though, came in the 85th minute.

Billy Bremner, Leeds’ brilliant midfield heartbeat, always gave as good as he got, but in 1970 he was a clear target for the Chelsea players.

It was for a shove on the Scot that Hutchinson earned the game’s only booking, sparking a running battle between the two for the remainder of the game that saw late tackles, retaliatory kicks and some expressive hand gestures from each.

It would be McCreadie, though, who would strike the biggest blow, leaping high into the air in the box, missing the bouncing ball and performing a karate kick to the head that “almost cut Bremner in half” according to Blues defender John Dempsey. Jennings, in his final game as a professional referee, waved play on.

Hutchinson and Webb would have the decisive say and ultimately win the war for Chelsea in extra time, with the former’s booming long throw making its way to the back post off the head of Charlton for the latter to nod home.

“Once I saw the Leeds players, I knew I could celebrate,” Webb told the Mail. “Leeds would complain about anything. If there was any reason to claim a foul, they’d have been doing it and they weren’t complaining, they were deflated.”

For Chelsea it represented an historic first FA Cup win and would lead to more silverware in the following season’s European Cup Winners’ Cup.

For Leeds it was an agonising near miss in a season full of them, coming in a month that saw a second successive league title slip from their grasp and a European Cup challenge end at the hands of Celtic in the semi-finals.

With scars healed and fury subsided, much has been said about the 1970 FA Cup final replay in the 50 years since by those who played in or witnessed it. Perhaps the most revealing comment belongs to Leeds’ Paul Madeley: “It was just the way the game was played back then.”