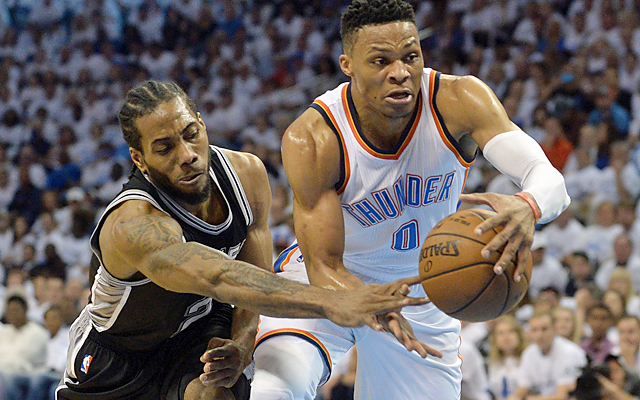 An NBA series follows a format. There’s the opening Game 1, the crucial Game 2, the “pivotal” Game 3 where the series usually turns, the “must-win” Game 4 for whoever is down (either 2-1 or 3-0), followed by either “the decisive” or once again “pivotal” Game 5. In this case, Game 5 will be the latter for the Spurs and Thunder before what will be a “desperation” Game 6.

After more than 10 days covering what has become an incredible semifinals series, here are 10 things you should know before Game 5 Tuesday night.

1. Four Games In, Still No Edge. There is no such thing as momentum in this series. Heading into Game 5, it doesn’t feel like there’s been any swing. It can be 2-2 with the road team still having won Game 4 and yet feel like the higher seed has momentum. That’s not the case with the Spurs, nor is it the case that the Thunder have figured anything out.

The Spurs led the entire game until the fourth quarter of Game 4, and had kicked off a previous run to tie. They seemed to have an answer for everything, which held the sandbags in place, until OKC finally flooded the gates with its flurry from Kevin Durant, Russell Westbrook, Randy Foye and Dion Waiters. They just overwhelmed San Antonio’s defenses, but with two more left in the Spurs’ Terrordome….Read More

Source: 10 things you need to know about OKC-Spurs before ‘pivotal’ Game 5 – CBSSports.com