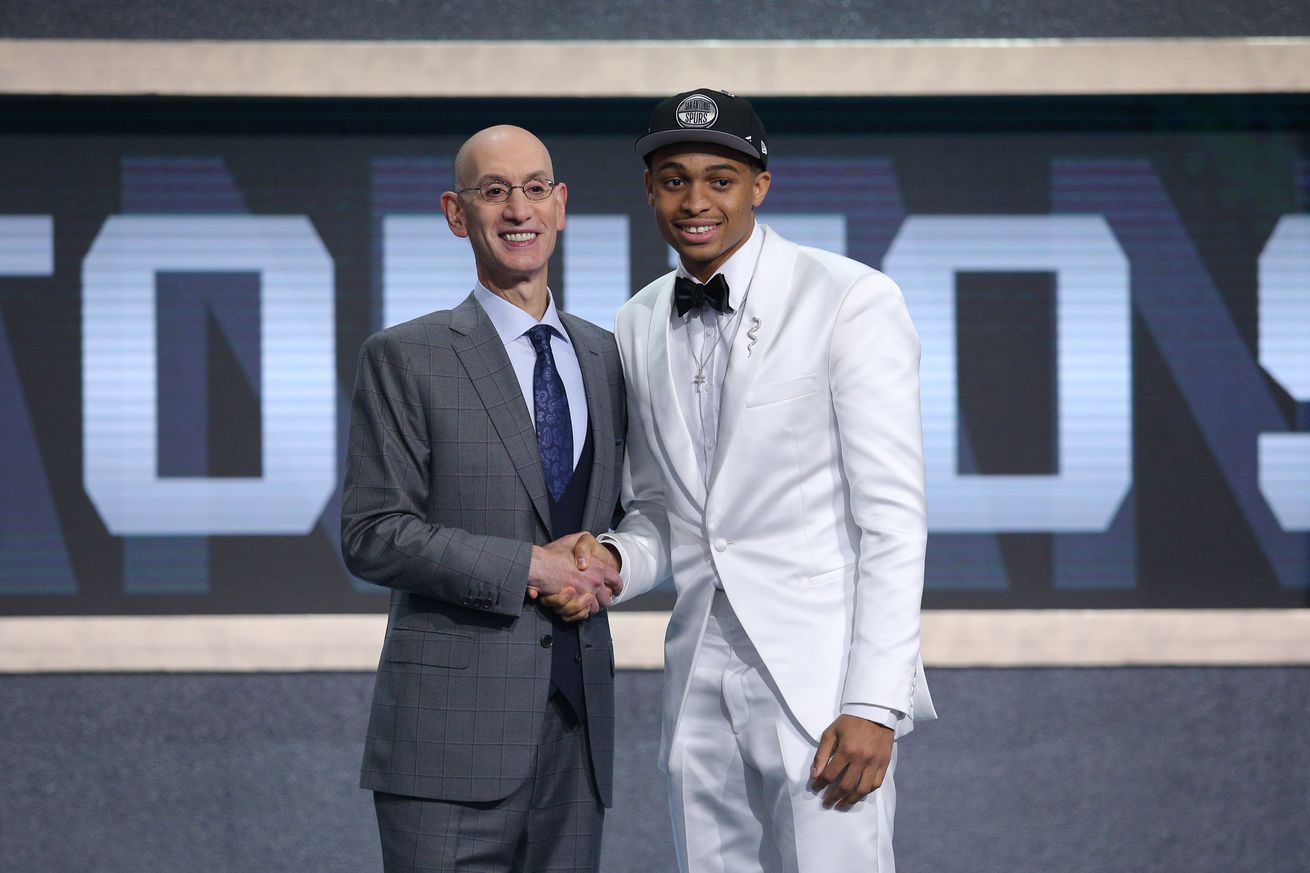 Johnson is still young and very raw, but with the Spurs’ developmental system, he could end up being one of the steals of the draft.

One of the many staples of the San Antonio Spurs is their ability to find talent late in the first round of the NBA draft. With Cory Joseph being drafted in 2011, Dejounte Murray in 2016, and Derrick White in 2017, the 29th pick has been especially kind to the Spurs in recent years. The Toronto Raptors’ 2019 first round draft pick that was sent to the Spurs in the Kawhi Leonard trade ended up landing — you guessed it — 29th overall. With that pick, the Spurs drafted Kentucky product Keldon Johnson.

Whether fair or not, Johnson’s success in the NBA could impact how people ultimately feel about the Kawhi trade. I’m not concerned about that though, as that’s too much unnecessary pressure to put on a young player. I’m just glad the Spurs were able to find a wing player with the potential to contribute to the Spurs’ youth movement.

Similar to Murray in 2016, Johnson was a projected top 20 pick who slid far enough down the draft to be available to the Spurs at 29th. After what many probably considered a reach in drafting Luka Samanic at 19th, the Spurs found themselves a steal at 29. Since it’s impossible to know how new draftees will pan out in the NBA just minutes after the draft, let me clarify what I mean when I say steal. If you had told me before the draft that the Spurs drafted Johnson at 19 and Samanic at 29 I would have been elated. Johnson is a project though, and we as Spurs’ fans will need to be patient with his development.

The first thing I look at when a player is drafted is need. With the Spurs drafting a guard in each of the past three seasons and a stretch big with the 19th pick in this year’s draft, the obvious need was at the wing position. Johnson is 6’ 6” with a 6’ 9” wingspan, which is excellent size for a shooting guard but slightly undersized for a traditional small forward. His weight of 215 pounds is promising though. Plus, he’s only 19 years old so his body will have plenty of time to fill out.

Offensively, Johnson’s biggest asset at this stage of his career is his spot up shooting. His Points Per Possession (PPP) of 1.083 in 181 possessions was ranked 25 out of the 96 players in the NCAA who had at least 180 spot up possessions last season. Over 35 percent of his overall possessions came from spot up shooting. The Spurs have plenty of spot up maestros on their roster — they were the best spot up shooting team last season — but one can never have too much shooting. It’s going to be very important that this part of his game translates in the NBA, or he’ll have trouble finding playing time for a few years until he’s developed other parts of his game.

Johnson was also above average at shooting off of a screen. His PPP of 1.047 in 64 possessions was ranked 90 out of the 234 players in the NCAA who had at least 60 off screen possessions last season. I don’t expect the Spurs to be calling plays for him early in his career so his ability to hit shots off screens may not be incredibly important right now.

He loves to get out in transition, though he wasn’t very efficient at scoring in transition possessions. Lonnie Walker IV has similar issues, but once these two players are able to control their body better around the rim their ability to get out and run will be an asset for the Spurs.

Johnson is underrated as a slasher. He has a decent first step that allows him to get by his defender, especially if the defender respects his jumper too much. He has good lateral movement, allowing him to weave his way past defenders. I wasn’t able to find any video footage, but several scouting reports I found of him while putting together my draft articles talked about him having a nasty eurostep. I hope this is true because I really miss Manu. He has good touch and has a decent floater but doesn’t have much explosiveness near the rim.

Johnson was not asked to handle the ball much at Kentucky. He averaged only 1.6 assists per game and had a grand total of 34 possessions as a pick and roll ball-handler. He shot the ball in 15 of those possessions and made only three of his attempts. He was excellent at passing out of the pick and roll though. In 19 possessions where he passed out of the pick and roll the team had a PPP of 1.316. That was one of the best marks in the NCAA, albeit on a very small sample size. Having wing players handle the ball is an important skill to have in the modern NBA, so hopefully this is something he develops over time. He won’t be asked to do much on offense with the Spurs for a while so he has plenty of time.

Defensively Johnson is very raw. He didn’t average very many blocks or steals but he has the measurements to develop into a good, versatile defender. Right now he is better defending slower wing players than he is guards, but that is something he can work on over time. The one thing I noticed about his defense is that he loves putting pressure on his defender. He’s a high energy player who never takes a play off and was a plus rebounder at his position. Similar to Murray, Johnson loves to get into the paint and mix it up with the bigs when going for a rebound.

Johnson projects to be a solid 3-and-D player at the next level, which is exactly the type of player the Spurs need to start developing. Right now he is very inconsistent. When he’s on he’s on, but the reverse can be tough to watch. Kentucky made it to the elite 8, but other than his first round performance, Johnson struggled putting it together during the tournament. I don’t think he has quite the ceiling as some of the other wings who were drafted before him, but the Spurs got excellent value at 29. Just don’t expect him to save the day next season.

With Keldon Johnson, the Spurs get a much needed wing player
Source: Pounding The Rock