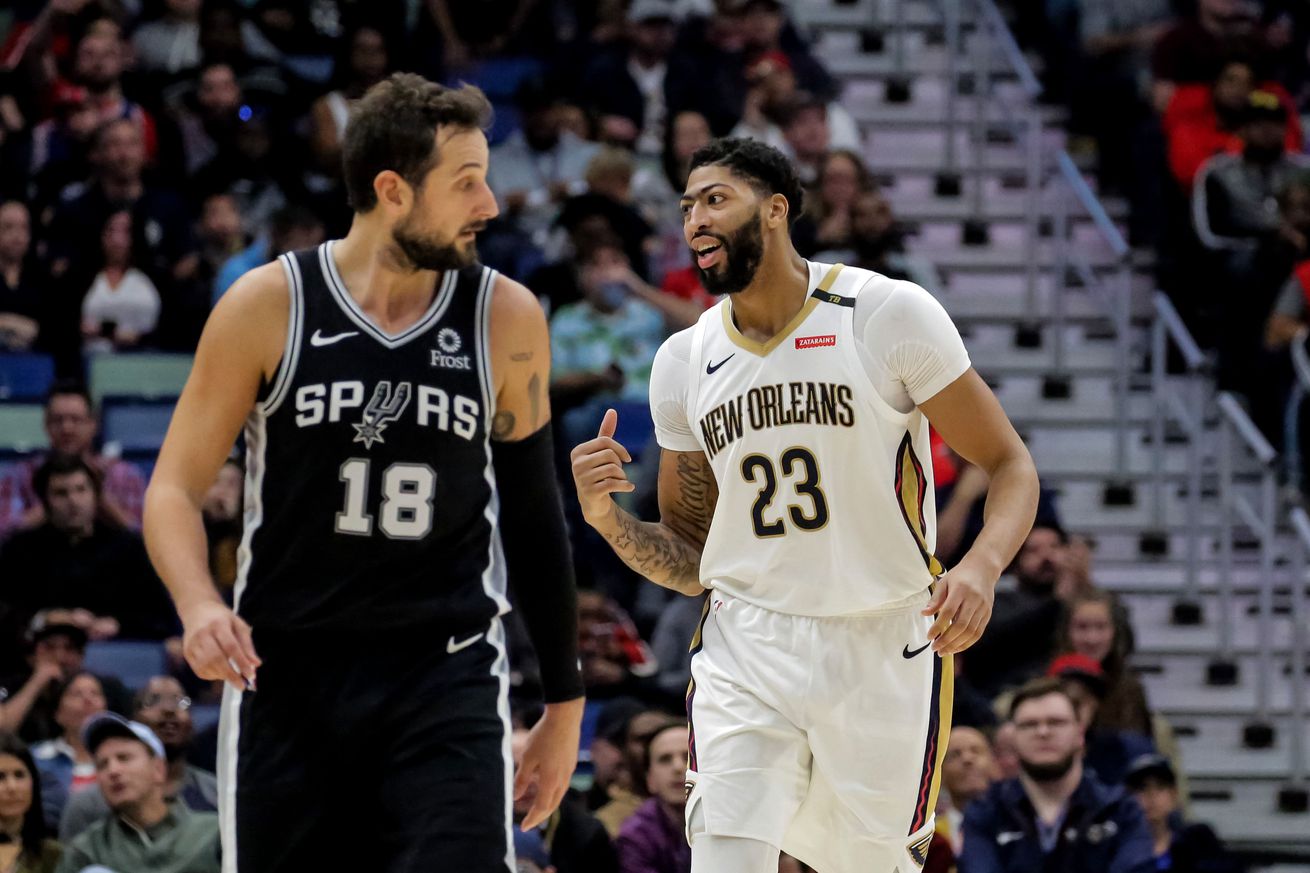 The Spurs, like every other team in the league, should inquire about Davis, but it’s highly unlikely they actually deal for him. Thanks.

What executives in the league have been anticipating for years has finally happened. Anthony Davis has asked out of New Orleans, according to multiple reports. The Pelicans released a statement acknowledging the trade request but have said they’ll make a decision on their own schedule.

This is monumental news for the league. Every team that is allowed to add him now (sorry, Celtics) will make a call to the Pelicans in the hopes to have Davis around for the playoffs. If a deal doesn’t happen now, one will surely take place in the offseason, as it’s clear that Davis has reached a point of no return. He’s gone.

The Spurs will surely do their due diligence and contact the Pelicans’ front office. When a player of that stature becomes available, it would be foolish not to. Unfortunately it is extremely hard to see Davis landing in San Antonio, so the best we can hope for is for him to make a move East.

Davis would obviously be a fantastic acquisition for any franchise. He’s the best big man in the league, a two-way force who can make an impact inside and out. He’s the type of player you sacrifice multiple assets for without hesitation. He’s been a bit injury prone and doesn’t seem to be the greatest leader, but he’s never had a serious injury and could fit perfectly in a place like San Antonio that has a strong-willed coach to control the locker room. The Spurs should put every player and pick they own this year and next on the table if it gets them a chance to snag The Brow. Unfortunately they might not have the right pieces to actually entice New Orleans to deal with them.

It’s impossible to know exactly what kind of package the Pelicans will want, but they will probably ask for cap relief, a young blue-chipper and at least one first round pick. They are not in a great position to negotiate, but Davis is such a game-changing player that they will get good offers from teams that know he would resign with them and maybe some from teams that might not be sure he will. The Spurs are probably in the second group and could put together a package of Pau Gasol, Davis Bertans and Marco Belinelli as salary ballast, Derrick White and the two picks they own in the 2019 draft for Davis and Solomon Hill. That wouldn’t be a terrible haul for New Orleans, but it’s almost certain they can do better.

It’s not that those are bad assets. Gasol offers some cap relief and Bertans is young enough to be a piece in their rebuild. Belinelli could be flipped and White has emerged as a potential top 15 starting point guard. The picks wouldn’t be too intriguing, since they would likely land in the 20s, but maybe the Spurs can offer their 2020 or 2021 first rounder instead. Even if they did, they would probably come up short anyway. The Knicks and Clippers, for example, could offer more 2019 cap relief while the Lakers have two former No. 2 overall picks to send out along with other young pieces that would make the deal easier to sell to Pelicans fans. As good as White has been, he’s an unknown for casual fans.

There’s a chance New Orleans decides to go a different way and targets players that can keep the team in the playoff hunt. Dell Demps tried to make such a deal when Chris Paul first asked for a trade back in the day, after all. It’s hard to imagine ownership going for that, honestly, but even if they did the Spurs wouldn’t be in a great spot to grab Davis anyway. They could offer something like DeMar DeRozan, Bertans, Jakob Poeltl and White for Davis and Hill, which is a good package but not good enough to postpone a rebuilding process. Other teams have younger stars and similarly talented role players to send out. It would be risky for the Spurs to go all in on a player that could end up being a rental, so offers including both DeRozan and LaMarcus Aldridge would probably be out of the question, assuming the Pelicans would actually want both, which is doubtful.

Davis is unfortunately not likely to become a Spur, but that doesn’t mean his trade request can’t benefit the Silver and Black indirectly. Just the fact that he made it public will probably sink the Pelicans, leaving the West with one fewer playoff contender. After that the hope is that, just like Jimmy Butler, he’ll end up on an Eastern team. The Celtics can’t make a deal for him until the offseason, but look like a real possible landing spot for The Brow. The Knicks will try to get him and Brooklyn and Chicago should take a shot at trading for him. Any Eastern team would do, really, because if a Western team that already has another star gets, they would immediately become a contender. The Lakers would be a nightmare with him around, but the worst case scenario would be him being traded to the Warriors, extending their dynasty.

Davis trade request is bound to reshape the league. It’s always unfortunate when small market teams lose their homegrown stars, but this breakup didn’t come out of nowhere. Teams have been preparing for this moment for years and now the maneuvering and posturing will begin by all sides, eventually concluding with Davis wearing another jersey, like it was prophesied by journalists and insiders for years.

It would be fantastic if he could somehow find his way to San Antonio, but it would be very tough to make it happen unless he asks specifically to be traded there, something he probably won’t do. The Spurs will in all likelihood be spectators of this gigantic event that will happen either at the deadline or the offseason. As long as The Brow doesn’t land with another team in the conference, they should be happy.