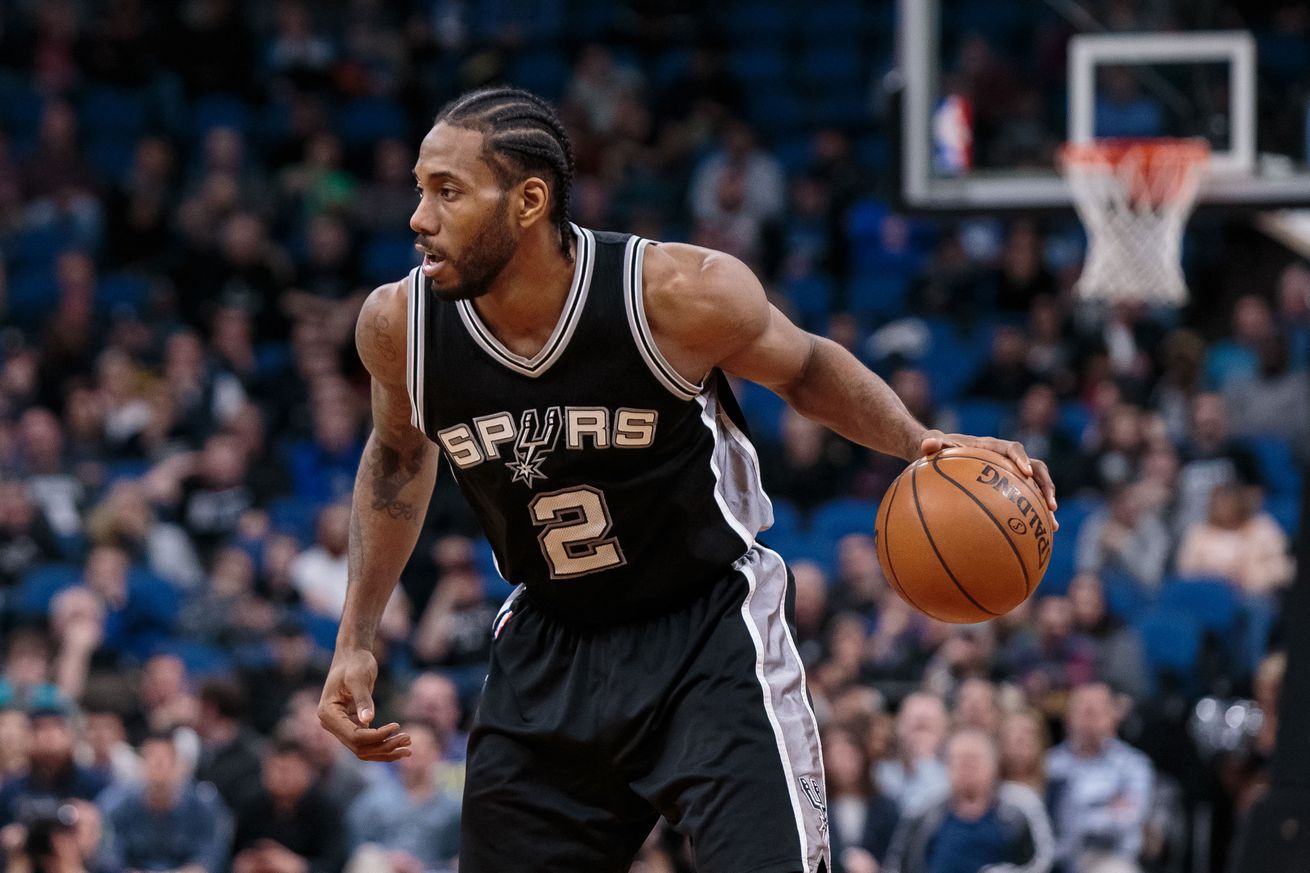 When Stuart Scott asked, “Who are you, man?” the Spurs star answered, “I’m Kawhi Leonard.” While that’s a good start, it’s not quite enough.

Multiple times this season, Kawhi Leonard has done things on the court that have made me lose control of my body. These convulsions make me curl my arms towards my chest and pump my fists back and forth like I am shaking a cage. But, I am shaking that cage like a crazy person who is totally okay being in a cage. Usually I’ll accompany these Kawhi induced seizures with hysterical laughing.

The man makes people freak out, kind of like how teenage girls wouldn’t stop screaming around the Beatles. For example, here are texts I’ve gotten from friends at various points of the season after Kawhi has done something spectacular….

“Kawhi is my boyfriend.”

“I love Kawhi more than I’ve ever loved anything.” (Ok, I sent that one.)

I sit behind the basket closest to the Spurs bench. And last week when Kawhi committed double homicide against the Blazers, I shot out of my chair, dropping my phone to the concrete, kicking over my drink and losing my hat all so I could let out an unintelligible war cry. I supported Kawhi Leonard so much in that moment, I think I would have blindly done anything he might have commanded me to do. I might have been okay with him actually ending Noah Vonleh and Jusuf Nurkic.

The man brings out strong emotions among Spurs fans. Maybe more than the great players before him. It seems odd that a dude who hardly talks, occasionally smiles, and whose displays of excitement consist of a subtle fist pump can cause such violent reactions from those who love him. It’s clear that Spurs fans see something in him or want him to be something. So I set out to decide who Kawhi is to Spurs fans.

When I was in college I had a roommate who was an offensive lineman at the University of Texas. While he was actually considered small for a lineman at 6’7 280 pounds, every time I went somewhere with him I felt invincible. I remember walking down the Vegas Strip with him and knowing, “nobody is messing with us, because nobody is messing with Luke.” Nobody is going to mess with someone so big they could finish you with a bear hug you can’t get out of. Wherever anyone went with Luke, you had hope he’d take care of you.

Kawhi is the Spurs faithful’a hulking roommate. For the longest time, we said we needed to enjoy the Duncan era while it lasted because when it came to come to an end we’d be just another fanbase who occasionally got crumbs from the dinner table like the other lowly franchises. I dreaded that day. I remember telling a friend before the start of the season that this was the first year I’d ever gone into where I knew the Spurs wouldn’t win the title.

But, then the game against the Warriors happened. Kawhi came out to start the season looking like he’d been upgraded from KawhIOS5.0 to KawhIOS5000000.0. Then he outdueled LeBron James. Then he did this. Then he hit the game winner against the Pacers. Then he saved the day against the Pelicans. Then he sent James Harden into the sunken place.

Kawhi causes Spurs fans to do dumb things and his teammates to be dumbfounded because he’s gotten to the point where you just don’t think you can lose with him. Lately it seems like the Spurs have played down to every opponent, but you continue to believe because you’re walking down the Vegas strip with a guy nobody wants to mess with.

It’s been building all season, this feeling of invincibility that Kawhi Leonard gives. But more than anything, Kawhi is hope.

When you come to expect the worst for so long, you crave hope. A player like Tim Duncan leaves, with Manu Ginobili and Tony Parker not far behind, what can you realistically hope in as a fan? The law of averages tells all sports franchises they will have a lull. I think these valleys are even harder to deal with for fans of successful teams. Trust me, I went to the University of Texas. Fans DO NOT handle dips well. If Kawhi is the savior Spurs fans are starting to confess faith in, they won’t of even entered down into the valley of destitution or climbed aboard the treadmill of mediocrity. Kawhi Leonard gives hope to the Spurs masses that their descent off the mountaintop will never come.

I claim to be one of the few people who saw this coming with Kawhi Leonard. I think Michael Erler did too, as he dubbed him Big Daddy (the last Boss you have to get through to beat the game) as early as the 2013 playoffs. It’s not revisionist history, I really thought after the 2013 Finals that he’d be a superstar. My sports heart was so broken after the ‘13 Finals, I don’t think I watched a game until late March, but I always checked to see how Kawhi was doing, expecting that leap to be made.

I was in third grade when the first Harry Potter book came out and a senior when the last one was released and I felt like I grew up with Harry. It seemed like our struggles paralleled one another, minus the Voldemort stuff. Most people my age could probably echo that. With Kawhi, I feel like it’s been similar. I’ve gotten to watch him grow up and grow alongside him. Minus the defending Lebron James stuff.

He’s smooth and fun to watch and he races down the court and he throws down cool dunks. He plays like Michael Jordan and Kobe Bryant, so it’s difficult to not prop him up to the rest of basketball and say “look, we’re cool too!” It’s fun to have someone that people finally like to watch play. He’s been a worthy MVP candidate for two years. This year he’s the only player in the top 16 in Offensive Rating, Defensive Rating, Usage and Win Shares (via StatMuse). I’ve struggled at not allowing Kawhi to become who he will become on his own. It’s hard not to build him up to be Michael Jordan or Kobe Bryant or Kevin Durant because there are similarities and his consistent improvement year to year is jaw dropping. If his points per game keep improving like this, he’ll average over 50 when he’s 33. Buy tickets for the 2025 season now because Kawhi’s coming for you Wilt.

Kawhi is hope to Spurs fans. He’s the Neo or the Harry Potter or the Jimmy Chitwood to our hearts right now. He’s hope of continued relevance and a continued seat at the big boy table. His predecessor won five titles and in all circles is a top-10 basketball player of all time. Kawhi has said he wants to win more championships than Tim Duncan. He’s hinted at that before and I think his singular focus on basketball might get him there. If he gets there and surpasses Tim Duncan, who will he be to Spurs fans? I can’t imagine.

But, what if he doesn’t get there? What if he doesn’t keep the Spurs as high on the mountain top as their demanding fans want to be. What then? What if he’s what Tony Romo was following Troy Aikman? Great, phenomenal at times, underappreciated and even better in some ways, but not the same. Hope unfulfilled or leaving something to be desired in the case of the soon to be ex Cowboys quarterback. Who would Kawhi Leonard become to Spurs fans if they don’t feel invincible walking beside him in a few years?

Kawhi Leonard has consistently honed his craft every year of his career. Even this season can be divided up into snippets where you see him getting better at something starting at game X and you’ll continue to notice it. In the overtime win against the Pelicans, I texted JR Wilco that Kawhi was looking like LeBron. He continually drove into the lane and magnetically sucked every defender into his vicinity, then kicked the ball out to a teammate or shooter.

In Thursday’s win against the Grizzlies, he had just four assists, but he had the hockey assist over and over again. The ball moved around the court and Kawhi was less involved in the offense than he has been at points in the season. After the game he said we “have to play like this to win.” He didn’t say that after his games where he scored in the high 30s. He said it after this win, where there were numerous trips down the court where he didn’t touch the ball and Parker, Mills and LaMarcus Aldridge all shined brighter than he did. His game changing save of a ball going out of bounds which led to a Patty Mills’ And One won’t show up in the stat sheet, though it was a sign of supreme effort. Grizzlies Coach David Fizdale said it was an “incredible play…possible MVP, superstar play.” It was a superstar doing everything he possibly could so his team could win. That’s a player to have hope in for a long time.